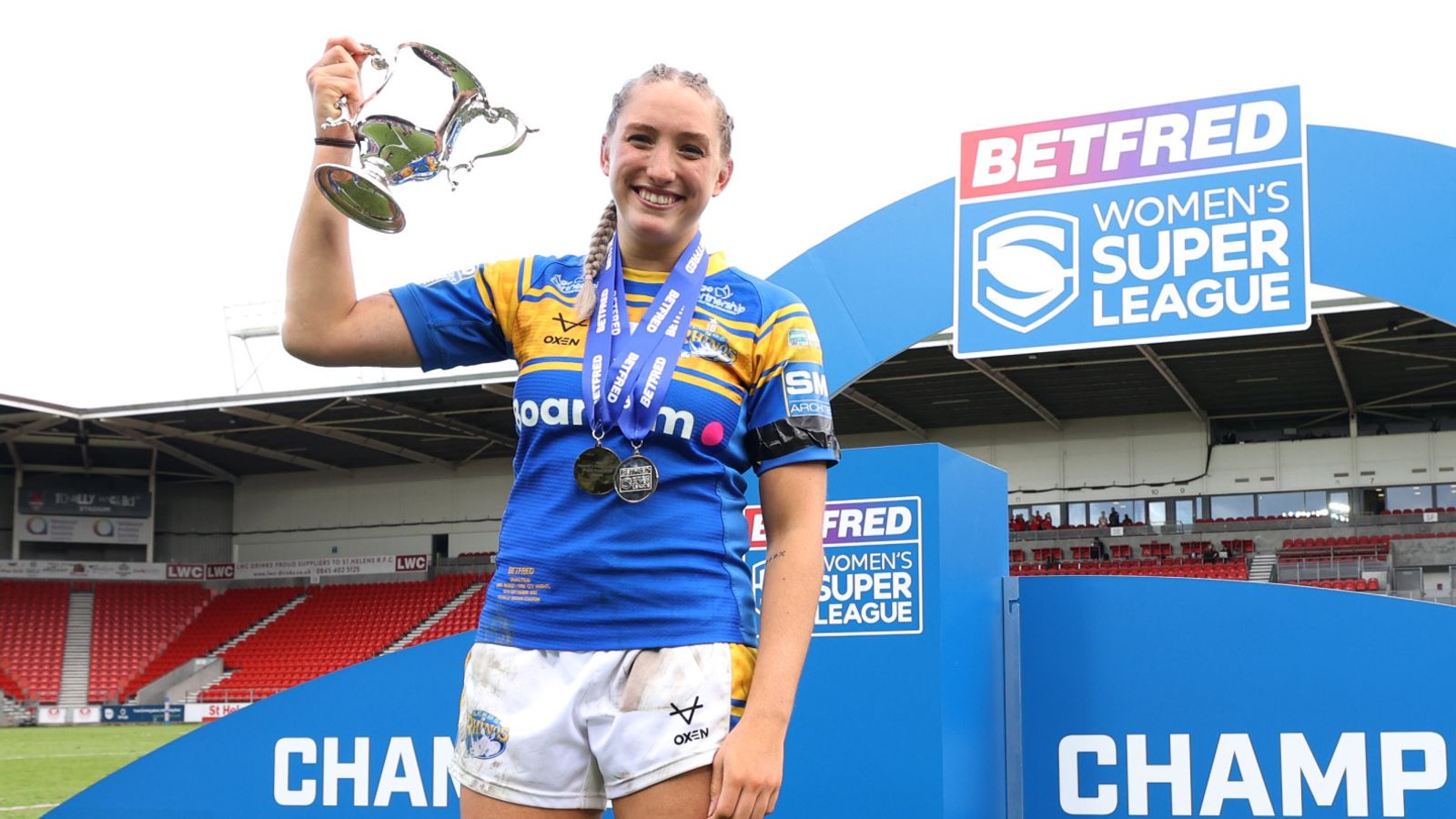 “Every team needs a Caitlin Beevers” – the assessment of Leeds Rhinos head coach Lois Forsell after the centre was awarded player of the match in their Betfred Women’s Super League Grand Final win over York City Knights.

Still not 21 until next month, Beevers is now a two-time BWSL champion after her two converted tries and her part in an immense team defensive effort went a long way towards ensuring the Rhinos triumphed 12-4 at Totally Wicked Stadium on Sunday.

She was one of seven members in Leeds’ matchday 17 which had played in the 20-12 Grand Final victory over Castleford Tigers at the same venue three years ago, although on that occasion she was lining up at full-back rather than in the three-quarters. 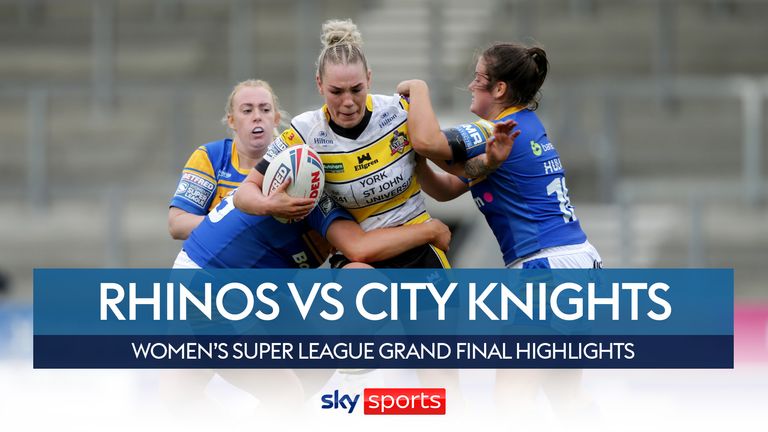 The best of the action from the Women’s Super League Grand Final between Leeds Rhinos and York City Knights.

The best of the action from the Women’s Super League Grand Final between Leeds Rhinos and York City Knights.

The ease in which the 20-year-old has transitioned to that role this year is one of the reasons her coach is in no doubt as to her value to the team even at such a relatively young age. For her part though, Beevers was lost for words.

“It feels immense, and I cannot get over how it feels,” Beevers said. “Since 2019, it’s a fairly new team and this is a lot of the girls’ first trophy, so to be able to do that for the girls feels unreal.

“The girls really put their bodies on the line and the thing we kept saying was it was the last 80 minutes of our season and the year.

“You tell by a lot of the defensive efforts it definitely meant a lot to the girls.” 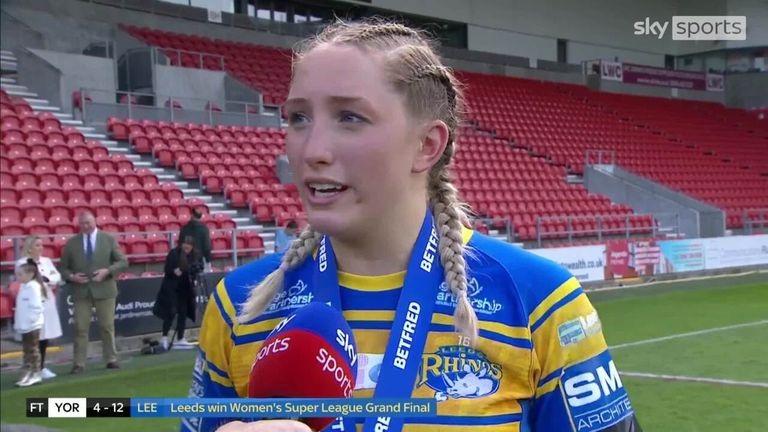 Player of the match Caitlin Beevers says the Women’s Super League Grand Final was a ‘phenomenal game’ for the women’s game.

Player of the match Caitlin Beevers says the Women’s Super League Grand Final was a ‘phenomenal game’ for the women’s game.

It marked the second time Forsell had tasted Grand Final glory but the first as a head coach, having been named player of the match herself back in 2017 when she helped former club Bradford Bulls to victory over Featherstone Rovers in the first season of the Women’s Super League.

She was a spectator that night three years ago due to the ACL injury which brough an enforced end to her playing days with the Rhinos, but has overseen Leeds remaining one of the leading lights in the Women’s Super League since taking charge.

“It’s a little bit different as a coach,” Forsell said, reflecting on Sunday’s success. “It’s a lot harder, I would say.

“There are a lot more things to think about and the pressure seems to be much different as a coach because you’re trying to support other players and other people, but I’m incredibly lucky I’ve got a great support staff as coaches and the club are amazing. 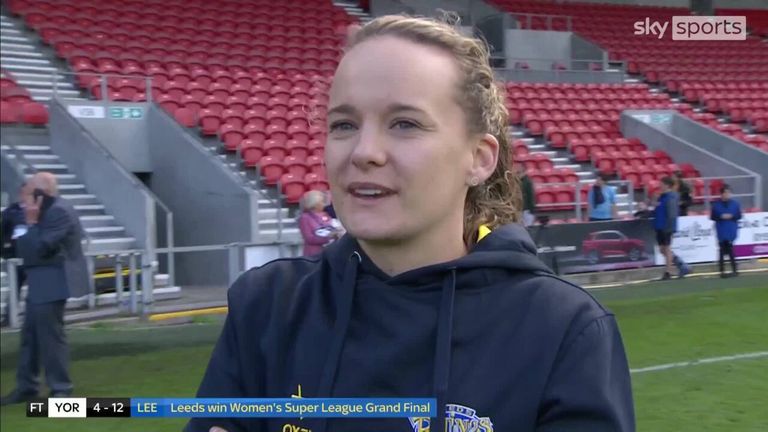 Leeds Rhinos head coach Lois Forsell says she is ‘so proud’ of her team.

Leeds Rhinos head coach Lois Forsell says she is ‘so proud’ of her team.

“I appreciate them for giving me this opportunity to do it, but it feels a bit surreal to be quite honest that we’ve finally got there and done it.”

It was a historic day too for her and opposite number Lindsay Anfield as it marked the first occasion two female coaches have faced each other in the BWSL’s showpiece match.

Anfield has long been a trailblazer in that role, first during a successful spell in charge of Castleford and now as director of rugby at York, who were unable to follow up a maiden League Leaders’ Shield success in the regular season with Grand Final glory.

Not that Anfield was too downhearted though, enthused by both the team’s efforts this season and the wider work being done in the Minster City. 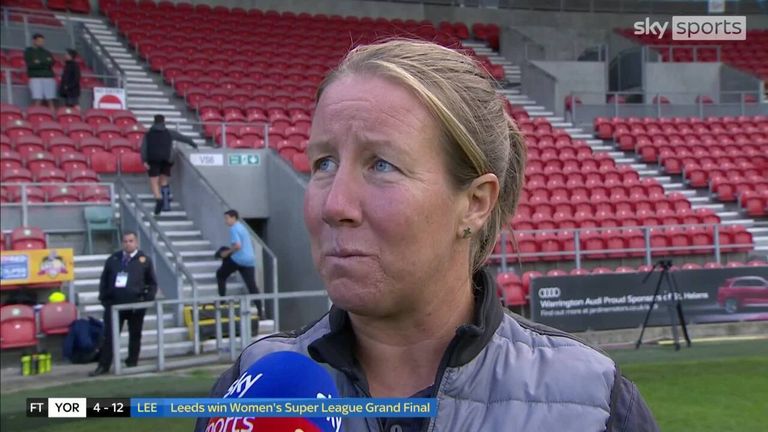 York City Knights head coach Lindsay Anfield says that her side will ‘come back hungry’ next year.

York City Knights head coach Lindsay Anfield says that her side will ‘come back hungry’ next year.

From next year, the City Knights will have an U19s team to go with their U14s and U16s teams, while they were cheered on by a significant following from community club Heworth in St Helens.

“I’m so passionate about it to the point I’m probably addicted,” Anfield said about how much women’s rugby league is growing in York. “Heworth brought a 53-seater bus today and this time six months ago they didn’t have a girls’ team.

“The fact we’re providing them with role models for these girls and giving these girls something to aspire to is really important to me.

“Loads of the girls who have been playing for York this year haven’t experienced anything like this. They say you learn more from a loss than they do a win, and I’m sure they’ll learn a lot from this.”

This is not quite the end of the year for many of the players involved in this game though, with several of them on both teams set to represent England – and, in the case of York duo Elisa Akpa and Leilia Bessahli, France – at November’s Rugby League World Cup.

As someone who has seen the Women’s Super League grow from a four-team competition to a 12-team affair across two groups in the space of five years, Forsell is excited about what 2023 onwards holds for both the competition and the women’s game.

“It’s amazing to see the progress, how much the players and the club have come on, and everything else,” Forsell said.

“It’s got so much bigger and hopefully we can capitalise on that on the back of the World Cup.”

Queen death public holiday: Can I use my sick leave on Friday to make a long weekend? Legal expert weighs in

Which animals could go extinct by 2050?