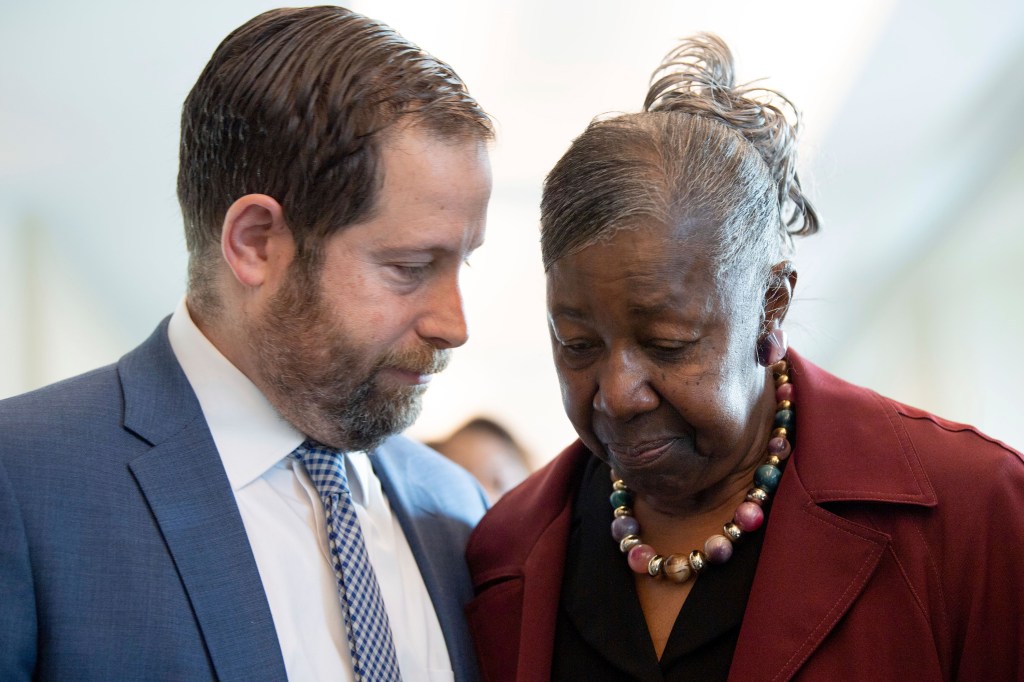 A Tennessee woman who was wrongfully convicted of murdering her great-niece and spent 27 years in prison, was exonerated this week.

On June 26, 1987, Joyce Watkins, now 74, and her boyfriend at the time, Charlie Dunn, went to pick up Watkins four-year-old great-niece, Brandi, in Kentucky, according to a report filed with the Davidson County Criminal Court.

The next morning Brandi was unresponsive, so Watkins took her to Nashville Memorial Hospital.

Brandi suffered from severe vaginal injury and head trauma. She was pronounced dead the following day, the report stated. The two were with Brandi for only nine hours, but the medical examiner, Dr. Gretel Harlan, concluded the injuries were sustained during that time.

A year later, in August 1988, Watkins and Dunn were convicted of first-degree murder and aggravated rape.

The two spent 27 years behind bars before they were both granted parole in 2015.

Before his release, Dunn, unfortunately, passed away in jail.

Prior to Brandi being picked up by the couple, she was living at the home of Rose Williams, Brandi’s great-aunt. Brandi’s mother was in Georgia at the time.

Throughout that period, a Kentucky Department of Social Services worker visited the home after receiving a report Brandi had been abused.

Williams explained Brandi’s injuries Brandi were due to a playground mishap, and the investigation was closed.

Now 35 years later, Watkins has been exonerated after she made it a point to clear her name.

Dunn was also cleared of the crime and posthumously exonerated.

His daughter, Jackie Dunn, was at the hearing on Wednesday. “I wish my daddy was here to witness this day,” she said. “He knew he was innocent, he knew he did not commit those crimes,” Dunn said to CNN affiliate WTVF.

Watkins got help from the Tennessee Innocence Project and the Davidson County District Attorney’s Office.

“We got this case because she (Joyce) came to us,” Jason Gichner, senior legal counsel with the Tennessee Innocence Project told CNN. “She just showed up at the office and said, ‘Let me tell you my story. I need your help.’ ”

The report was filed on November 10, 2021, asking that the pair’s convictions be vacated.

The filing clarified Watkins noticed blood in Brandi’s underwear when they arrived home, only an hour and a half after the couple picked her up, with at least an hour of that time spent driving back to Nashville.

A report from Dr. Shipla Reddy was also included in the filing, who said Dr. Harlan’s “methodology for dating the head injury based upon a lack of histiocytic response in the brain tissue is not a legitimate method for dating pediatric head trauma.”

The ruling noted Harlan conceded the error in her methodology years after the trial.

According to Sunny Eaton with the District Attorney’s Office, Watkins is the first black woman to ever be exonerated in the state and only the third woman in Tennessee history.

As far as Watkins or Dunn’s family getting compensated for their wasted time spent in jail, Gichner said he is unsure of what will happen down the road.

In a comment to the media and CNN affiliate WZTV Watkins said, “I thank all the people for their prayers and helping me get out of this mess which has cost me half of my life for nothing, But I’ll get over it.”

Denial of responsibility! Yours Headline is an automatic aggregator of the all world’s media. In each content, the hyperlink to the primary source is specified. All trademarks belong to their rightful owners, all materials to their authors. If you are the owner of the content and do not want us to publish your materials, please contact us by email – [email protected]. The content will be deleted within 24 hours.
courtsCrimehalf her life stolen by the stateRacismracist systemTennesseewrongly convicted
0
Share