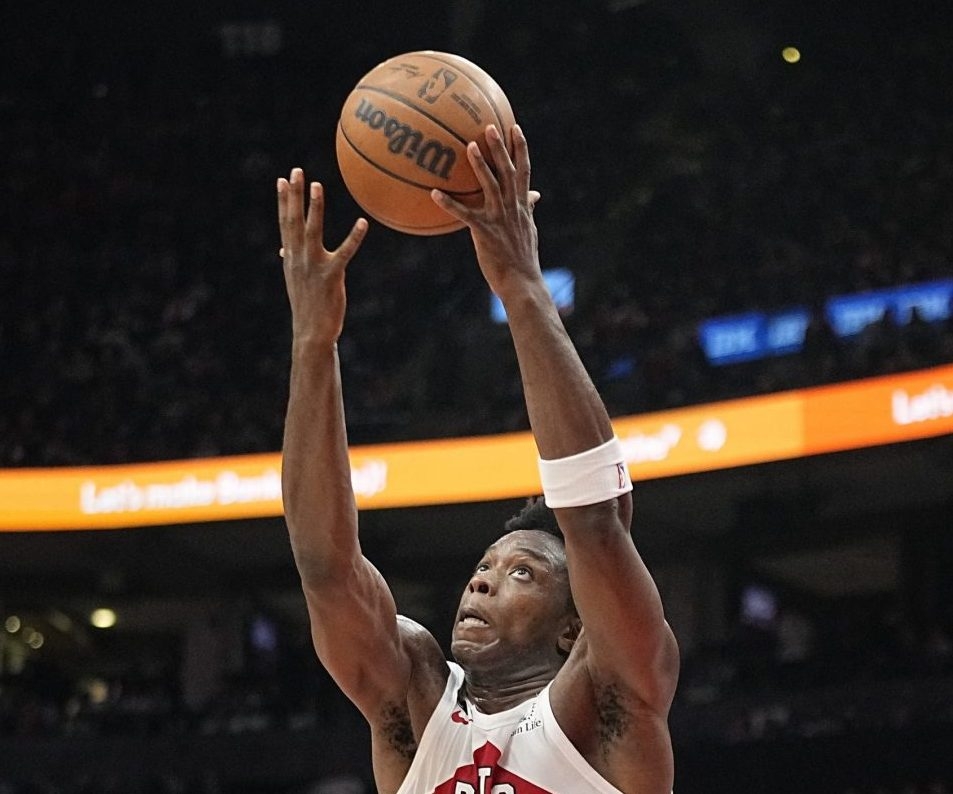 Way back before he was a quiet man getting an honourable mention as NBA player of the month, O.G. Anunoby was a quiet kid learning how to get better on a club team run by future teammate Thaddeus Young.

Even though Anunoby was under the radar nearly a decade ago when he started playing for the veteran big man’s AAU team in Memphis, Young has always maintained he knew Anunoby would at least make it to the NBA. And if a few things broke right, Young felt the young man could become a household name.

As the Canadian national soccer teams head to their respective FIFA World Cups, Derek Van Diest is on the scene to cover all the action. Expect expert insights and analysis in your inbox daily throughout the tournaments, and weekly on Thursdays for the rest of the season.

The next issue of Corner Kicks with Derek Van Diest will soon be in your inbox.

“When we first got him on Team Thad I said: ‘That’s a pro,’” Young told Postmedia after Anunoby’s massive performance against MVP candidate Luka Doncic last week.

“He’s going to be a top guy in the league. Great defender. All he has to do is just bring the offence along and he’s done that,” Young recalled of what he was thinking could happen back then.

“He’s learned how to actually score the basketball, to do different things that he needs to do in order for us to win basketball games”

Anunoby is having a career season both as a scorer (18.7 points per game, the fifth-straight season he’s raised his scoring average) and as a defender. Vegas recently installed him as the third-best choice to come away with defensive player of the year honours after he’d been off the board for the whole year.

“He’s getting steals, he’s going out there and playing 30 plus a night guarding the other teams’ best players and he’s still scoring over 20 a night (quite often).”

Young has been a steady player both on offence and defence since entering the NBA in 2007, but he’s only averaged over even 15 points a game in a season three times, so can appreciate just what exactly Anunoby has managed so far as an elite player all over the floor.

“That’s the toughest thing ever, because every team has a really good wing scorer. So, him having to take on those matchups and those assignments, that’s huge for him. But it’s also huge for us as a team. And it’s super tough, but he’s, he’s getting through it. He’s fighting. He’s battling and he’s putting us in a position to win.”

Coincidentally, Boston’s Jayson Tatum was the choice for Eastern Conference player of the month, announced Thursday, over the honourable mentions like Anunoby. Anunoby played with Tatum on a different AAU team where Anunoby was a bit lost in the shuffle before he ended up on Team Thad. There he was basically discovered by Indiana University, when reps from the school came to see some of his teammates and couldn’t take their eye off him.

Ever since he’s leaned on Young as one of his mentors.

“In the summertime he was there a lot and then like anyone could text him any time. I talked to him before I made my college decision, before I left for NBA and even when I was in the NBA, my rookie year,” Anunoby told Postmedia three years ago before playing against Young’s Chicago Bulls.

Young might never have expected they’d be teammates one day, but he predicted this rise.

And about O.G.’s quiet demeanour?

“He definitely talks when he needs to talk,” Young said.

But most of the time he just does his talking on the court.

OG AIMS TO BE TOP DEFENDER

NEW ORLEANS — It was about a month ago that O.G. Anunoby stepped out of character and boldly declared that not only did he always want to be Defensive Player of the Year but that he’s always thought he was the best defender in the league.

Now a little less than a month since he uttered those words people are finally taking notice.

The normally reserved Anunoby is now being mentioned in the same breath as other defensive stalwarts in the league like reigning Defensive Player of the Year Marcus Smart and former winners like Giannis Antetokounmpo.

Anunoby leads the NBA in steals by a comfortable margin and is among the league leaders in a number of hustle stats. He’s first in loose balls recovered and tied for second in total deflections.

Asked Wednesday about potentially winning the award, Anunoby said he felt the need to bring some attention to his efforts beyond just what he does on the court if he was going to be a serious candidate.

“I feel like I play a lot of defence,” said Anunoby who routinely draws the opponsing team’s toughest cover and biggest scorer. “And that’s an effort award,” he said. “It’s not a selfish award. It’s effort. You’re only helping the team so I feel like I’ve been overlooked.”

Not so much anymore as social media is now littered with highlights every time Anunoby shuts down or contains a Luka Doncic or a Donovan Mitchell.

“We’ll see at the end but I’m definitely (in the conversation) so that’s cool,” Anunoby said earlier this week.

As for why he felt it necessary to speak out, Anunoby said it was pretty obvious people weren’t taking notice beforehand.

And now Anunoby has made it something else.

‘Beast from the East’: What Met Office says about chances of snow hitting UK