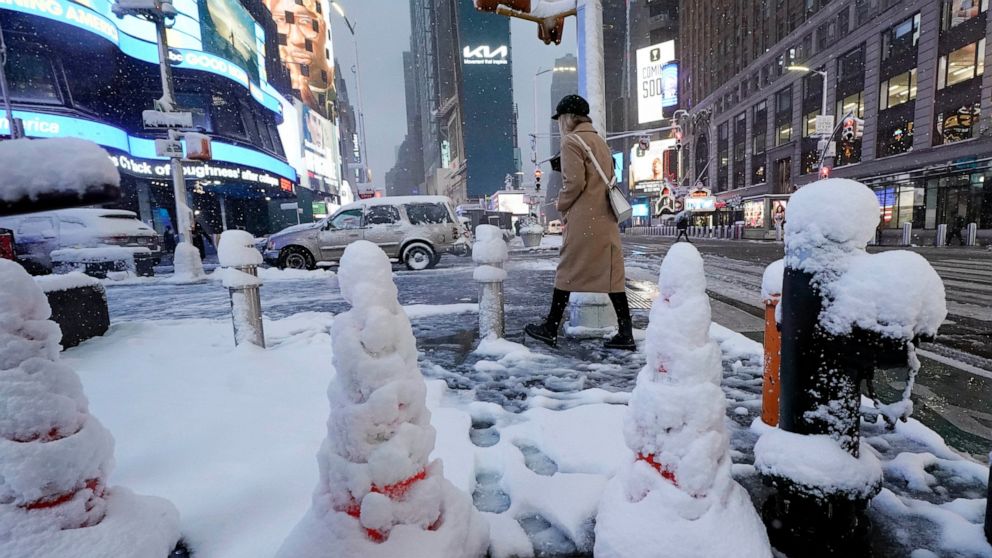 BOSTON — A winter storm that had already blanketed parts of the South in snow moved into the Northeast on Friday, snarling air travel, crushing morning commutes and delivering a dilemma to school districts that had been trying to keep children in classes during a surge in coronavirus cases.

“Children need to be in school. We don’t have any more days to waste” after the many closures and remote-learning days of the pandemic, said Mayor Eric Adams, a Democrat dealing with his first major storm after taking office Saturday. He also noted that many children rely on in-school meals and that some working parents can’t stay home.

In central Pennsylvania, Ericka Weathers, a Penn State University education professor, scrambled to finish a fellowship application while her two kids were home from school because of the snow. She started working around 5:15 a.m. to try to ensure she’d have enough time to finish by the deadline Friday evening.

“I’ve been trying to juggle,” she said as her 7-year-old sledded on the hill outside and her 4-year-old didn’t want to go out. “Every five minutes, someone’s asking me a question.”

By midday on the East Coast, airlines had scrubbed more than 2,400 flights, with the largest numbers at airports in Boston and the New York City area, according to tracking service FlightAware.

Airlines have struggled with staffing shortages caused by an increase in COVID-19 cases driven by the highly contagious omicron variant. In the U.S., cancellations had eased a bit this week after peaking at more than 3,200 on Monday.

By Friday morning, some spots in New England including Danielson, Connecticut, Norwood, Massachusetts, and Burrillville, Rhode Island, had received more than a foot (30 centimeters) by late morning, according to the National Weather Service.

Massachusetts Gov. Charlie Baker urged people to stay off the roads and take public transportation if possible, but there were reports of crashes around the region.

Plow driver Michael D’Andrea got a firsthand look at the mess on the roads. He saw plenty of vehicles spin out as the thick snow fell.

“The first storm is always a bit more dangerous,” said D’Andrea, 34, of Norwood, Massachusetts. “No one has driven in this weather for like six months. People have to relearn how to drive in this. And it’s usually not a foot of snow the first one. This is almost a blizzard with how fast it came down. 2022 is off to a bang, but I suppose we were overdue.”

A commuter bus spun out of control and blocked lanes on the Massachusetts Turnpike just outside Boston early Friday. No injuries were reported, but the bus caused a huge traffic jam.

A driver died at about 7:30 a.m. when a car went off Route 140 in Freetown, Massachusetts, state police said.

A tractor-trailer jackknifed in Greenwich, Connecticut, and forced a temporary closure of southbound Interstate 95, state police said. There were no indications of mass strandings on the major north-south thoroughfare, as happened after snow in Virginia earlier this week left hundreds of motorists marooned for hours.

But the snow had ended by 10 a.m. in New Jersey, allowing plows to clear the roads. Preliminary snowfall amounts showed 6 inches had fallen in Berlin, with 5 inches in Howell.

The storm also affected coronavirus testing sites, many of which have been overwhelmed with long lines and waits for days. Some testing sites in Rhode Island delayed their openings until later in the day, when the storm was expected to start tapering off. Testing sites in Connecticut closed.

From late Thursday through Friday afternoon, 4 to 7 inches (10 to 18 centimeters) of snow were expected in parts of central and southern New Hampshire, and south-central and southwest Maine, according to the weather service.

The storm brought record-setting snow to some areas of the South on Thursday.

Nashville saw 6.3 inches (16 centimeters) Thursday, shattering the city’s previous Jan. 6 record of 4 inches (10 centimeters), which had stood since 1977, the weather service said. Freezing rain and sleet coated areas around the Tennessee-Alabama state border, said Scott Unger, a meteorologist for the service in Nashville.

The largest snowfall in Kentucky was nearly 10 inches (25 centimeters) in Lexington, according to the weather service.

Denial of responsibility! Yours Headline is an automatic aggregator of the all world’s media. In each content, the hyperlink to the primary source is specified. All trademarks belong to their rightful owners, all materials to their authors. If you are the owner of the content and do not want us to publish your materials, please contact us by email – [email protected]. The content will be deleted within 24 hours.
Air travelCoronavirusCOVID-19 pandemicDiseases and conditionsDistance learningEducationGovernment and politicsHealth
0
Share