Will Russia invade Ukraine? What might happen if war erupts 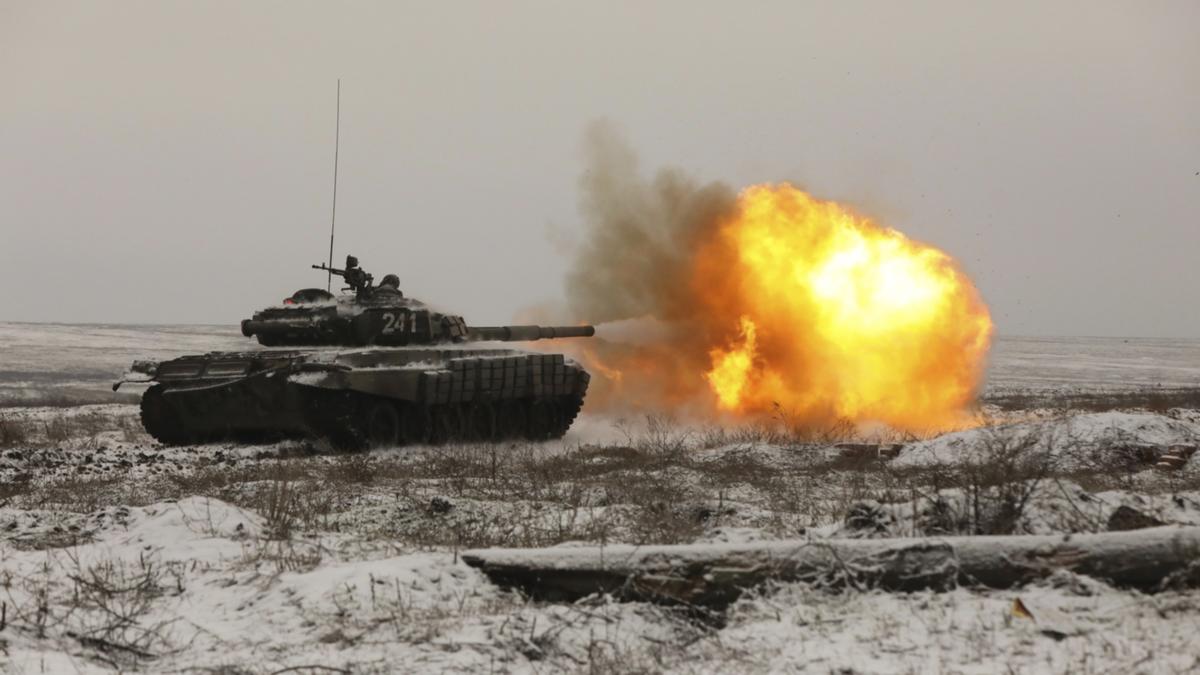 With more than 100,000 Russian troops deployed on Ukraine’s border, President Vladimir Putin is keeping the West guessing: Will he opt for a full-scale invasion, a more limited operation or simply keep Russian forces in place to maintain pressure on Kyiv and the West?

Enjoying an overwhelming military advantage over Ukraine’s smaller, less advanced forces, Russia has a range of options if Putin decides to launch an attack, depending on what Moscow wants to achieve, the price it is willing to pay and how the West responds, experts say.

With Russia’s formidable air and naval power, any offensive would most likely feature bombing raids, missile strikes and cyber attacks that could decimate Ukraine’s military infrastructure, disrupt communications and pin down ground troops.

“There’s an incredibly large force that’s on the border,” much larger than the one used to invade and annex Ukraine’s Crimean peninsula in 2014, said Philip Breedlove, a retired four-star US Air Force general who served as Supreme Allied Commander of NATO from 2013 to 2016.

“You have a Ukrainian land army that has gotten much better, much more capable” since 2014, said Breedlove, now at the Washington-based Middle East Institute think tank. “But the Russians would own the air and the sea.”

It’s still possible Russia could pull back its troops, though Moscow’s tough language suggests otherwise. After talks with US diplomats on Monday and with NATO members on Wednesday, Deputy Foreign Minister Sergei Ryabkov told Russia’s RTVI that there was no reason to schedule more talks with the Americans and NATO because of what he called their refusal to meet Moscow’s demands to return to a 1997 status quo in European security.

Short of a full-blown invasion and occupation of all of eastern Ukraine, Russia could choose to take more limited actions that could increase its leverage over Kyiv and test Western resolve and transatlantic unity, Breedlove and other experts say.

If Russia launches an offensive, it will likely be preceded by Moscow accusing Ukraine of a provocation, giving Putin an alleged rationale for action, experts say. Former US diplomats, retired military officers and Russian experts disagree about what Putin might be willing to do, but they point to several potential scenarios:

Most of Ukraine’s combat forces are deployed along a “contact line” in the eastern Donbas region, where they are facing off against separatists backed by Moscow. If the Kremlin rapidly moved in armored units to the west of the front line, it could possibly cut off and trap much of Ukraine’s ground troops, without having to occupy major cities, experts said.

“It would be a potentially enormous blow to Ukrainian military capability,” Boston said.

The conflict in eastern Ukraine began after pro-Russian separatists declared independence in the Donetsk and Luhansk regions in the country’s east, two months after Russia seized and annexed the Crimean peninsula in March 2014. NATO and Ukraine say Russia has launched cross-border artillery attacks, armed the separatists and moved weapons and personnel into the area. Moscow denies any involvement.

While the world’s attention has focused on Russia’s troop buildup on the country’s land border with Ukraine, Moscow also has expanded its naval power near Ukraine’s coast, including amphibious forces and naval infantry, experts said.

“The sea is Ukraine’s weakest spot,” said Taras Chmut, a Ukrainian military expert in Kyiv. The Russians “can do whatever they want in the Black Sea.”

Russian naval ships now dominate the Sea of Azov, a small body of water between Ukraine and Russia, where Ukraine’s modest navy is badly outgunned.

Moscow increasingly restricts the movement of Ukrainian-bound vessels in the area and experts say Russia could introduce a blockade on the southeastern port cities of Berdyansk and Mariupol, choking off an important shipping channel for Ukraine.

In the Black Sea, west of occupied Crimea, Russian warships could cut off the Ukrainian port cities of Odessa, Mykolaiv, and Kherso, which serve as crucial lifelines to global markets.

Such a move is well within Russia’s naval capabilities and could bring Ukraine’s economy to its knees, the country’s former defence minister, Andriy Zagorodnyuk, warned in June.

A Russian naval operation likely would include the seizure of a tiny island in the Black Sea known as Snake Island, or Zmiyiniy Ostriv. Ukraine currently controls Snake Island, enabling Kyiv to claim territorial waters that extend 12 nautical miles from the island, and helping to safeguard shipping lanes to the country’s Black Sea ports.

In addition to strangling Ukraine’s commercial ports, Russia could launch other operations in the south to consolidate its occupation of Crimea, experts say.

Russian forces could move to secure a canal that Kyiv shut down in 2014. The closure of the canal has created a chronic water supply problem on the Russian-held peninsula.

Moscow could also try to forge a land bridge between Crimea and the rest of Ukraine, possibly linking up with territory held by pro-Russian separatists.

“The idea of building that land bridge and seizing that water supply area. I think that’s very much on the table,” Breedlove said.

Putin could order Russian troops to enter separatist-held areas in the east in a mostly symbolic show of force.

Western governments and Ukrainian officials say Russian forces and Russian-armed proxies are already on the ground.

By rolling into separatist-controlled areas in an explicit way, Russia could keep tensions high with Kyiv without having to fire a shot, Breedlove and some experts said.

In addition, Russia could seek to extend the separatist controlled area, possibly by seizing communication points or power plants that would make the region more viable as a separate quasi-state.

“The most likely military scenario in my view is going to be a series of rolling operations that they can stop at any point along the way based on how the West reacts,” said Ben Hodges, a retired Army lieutenant general who served as commander of US Army Europe from 2014 to 2017.

Seizing a smaller area or strategic location, such as Snake island in the Black Sea, the water canal to Crimea or areas near separatist-held territory, and then pausing lowers the risk of casualties and “makes it more difficult for the West to respond,” said Hodges, now at the Center for European Policy Analysis.

Moscow could try to gamble that limited action would fracture NATO’s unity, as some European governments might be reluctant to impose severe penalties on Russia in that case, Hodges said. Without a sharp response, Russia might then press ahead with more operations.

Seize eastern half of Ukraine

This worst-case scenario would see Russia launch an air and ground campaign across Ukraine to seize the entire Donbas region east of the Dneiper river.

A massive invasion and occupation, what retired Army general Hodges calls “the big red arrow” across Ukraine, is less likely, and it’s not clear Russia has sufficient forces to hold that much territory after seizing it, several experts said.

But under Putin’s rule, Russia has invaded Ukraine before, and invaded Georgia in 2008. It also intervened in Syria to support the regime of Bashar Assad. In each case, Western governments were taken by surprise. And in each case, the threat of sanctions failed to dissuade Putin.

“Sanctions are an incredibly weak deterrent and have consistently failed to deter Russia from the use of force in Ukraine and elsewhere,” said Michael Kofman, research program director in the Russia Studies Program at the CNA think tank.

Given Putin’s track record, there is no reason to rule out another invasion of Ukraine, according to Kofman.

The case of Russia’s invasion in Georgia 14 years ago offers a rough analogy for a similar operation in Ukraine, he said.

In 2008, Russia launched a major military offensive to prevent the Georgian government from reestablishing control over the regions of South Ossetia and Abkhazia, and the operation succeeded in imposing a political outcome in line with Moscow’s interests.

If Russia does opt for a larger operation, Moscow may decide to avoid a long-term occupation of cities and simply pull back after inflicting a devastating strike to Ukraine’s army, some experts said.

“If they weren’t able to compel Ukraine towards a desirable outcome by taking half of the Donbas, what would another limited incursion achieve exactly?”

Russia could seize much of the east and demand a new political arrangement from Kyiv, or simply annex the area as it did with Crimea, experts said.

In the meantime, Russia’s buildup continues. Military analysts say Russia is sending units from the country’s Far East on trains bound for the western region near Ukraine.

Denial of responsibility! Yours Headline is an automatic aggregator of the all world’s media. In each content, the hyperlink to the primary source is specified. All trademarks belong to their rightful owners, all materials to their authors. If you are the owner of the content and do not want us to publish your materials, please contact us by email – [email protected]. The content will be deleted within 24 hours.
Conflict and WarNewsPoliticsRussiaUkraineWorld NewsWorld Politics
0
Share

Five Great Reads: on masked babes, Buy Nothing groups and an evil version of Wordle | Coronavirus