Why is Russia invading Ukraine? Amid ‘astounding’ resistance, here’s what you need to know – National 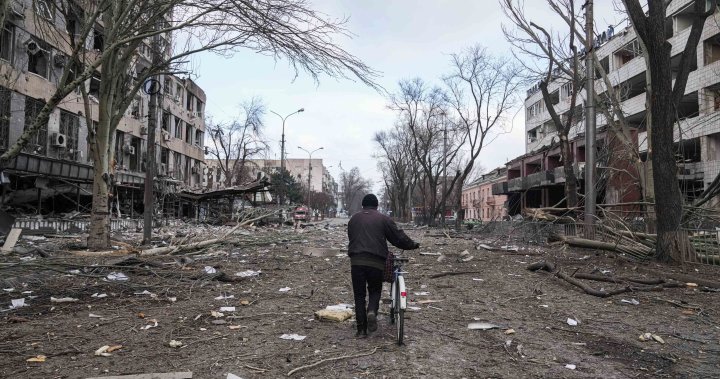 Two weeks have now passed since Russian President Vladimir Putin launched an unprovoked and bloody invasion of Ukraine, killing scores of civilians and most recently attacking a maternity hospital in the besieged port city of Mariupol.

Yet while the savagery has been clear, the motivation for the first land war in Europe since the end of the Second World War has sparked questions from both political leaders and citizens aghast at the devastation.

So far, discussions about Putin’s motivations tend to focus on two related angles: Ukraine’s historical ties with Russia, and the threat Putin perceives in Ukraine wanting to join the NATO military alliance.

Both are connected but distinct matters.

What has Putin said about the invasion?

Perhaps the most straightforward starting point is looking at what Putin himself has said.

While the Russian president has long rejected the statehood and independence of Ukraine, he has made speeches over recent weeks that offer insight into how he is attempting to justify the war.

Those largely focus on the perceived threat he believes a Western-oriented Ukraine and NATO, in particular, pose to Russia.

“We cannot stay idle and passively observe these developments. This would be an absolutely irresponsible thing to do for us,” Putin said on Feb. 24.

“For our country, it is a matter of life and death, a matter of our historical future as a nation. … It is not only a very real threat to our interests but to the very existence of our state and to its sovereignty. It is the red line which we have spoken about on numerous occasions. They have crossed it.”

Two days earlier, on Feb. 22, he had also dismissed Ukraine’s declarations of independence as a result of “historic, strategic mistakes” by Russian leaders in the early 20th century, and billed the creation of a Ukrainian state as the “disintegration of our united country.”

“Since time immemorial, the people living in the southwest of what has historically been Russian land have called themselves Russians and Orthodox Christians,” Putin claimed on Feb. 22.

“Modern Ukraine was entirely created by Russia or, to be more precise, by Bolshevik, Communist Russia,” he continued to assert. “This process started practically right after the 1917 revolution, and Lenin and his associates did it in a way that was extremely harsh on Russia — by separating, severing what is historically Russian land.”

Putin’s characterization of how Ukraine came to be, and how he views its historical relationship with Russia, is vital to understanding the worldview he holds as he wages war in Ukraine.

Is Ukraine part of Russia?

This is a simple one to answer right off the bat — no.

Contemporary Ukraine is a sovereign democratic state. It has a constitution, an elected government, internationally recognized borders and a population of roughly 45 million people.

How Ukraine got here, though, is a longer story.

To understand the roots of Putin’s decision to invade, we have to jump back in time. Not just to 1991, when Ukraine declared independence after the fall of the Soviet Union, but all the way back to the late ninth century when a federation of Slavic people known as Kyivan Rus first appeared.

Their territory spanned much of what is now part of Ukraine, Belarus and western Russia, and the people who lived there were called the Rus — the root of the names of both Russia and Belarus.

Why you should say ‘Ukraine’ not ‘the Ukraine’

All three countries — Russia, Ukraine and Belarus — claim descent through the people of Kyivan Rus.

In the centuries that followed, the federation fragmented, falling to the Mongols and later seeing emerging principalities fighting to establish themselves.

The principalities in the western part of the region came largely under Polish and Lithuanian control, while the principality in the east known as Muscovy — later the Grand Duchy of Moscow — would go on to become the heart of a tsardom established by Peter the Great in the early 18th century.

It was in 1654 that a turning point for both Ukraine and Russia began.

Ukrainian Cossacks got support from Muscovy to resist Polish-Lithuanian control over their affairs in exchange for recognizing Muscovy as a protectorate.

However, Andres Kasekamp, a professor with the University of Toronto’s Centre for European, Russian and Eurasian Studies, said the Ukrainians interpreted this as still protecting a right to self-government.

“But for the Russians, that is Moscow at the time, they kind of see this as the Ukrainians signed away their rights forever,” he explained.

Dominique Arel holds the Chair in Ukrainian Studies at the University of Ottawa. He also pointed to the period of 1654 as one that is central to understanding the worldview of Putin.

“The key point here is this idea, very firmly planted in Russia and Putin certainly believes it, that Ukraine, Russia, (have the) same history going back to Kyivan Rus, where 1654 is the reunification,” he said.

“What happened in 1654 is more like colonialism,” added Arel.

The next centuries saw conflict over the territories, but over time the eastern half, including the right bank of Kyiv, was ceded to Russia while Poland and later the Austrian Empire controlled the western half.

In the chaos following the Russian Revolution in 1917, Ukrainians fought for and declared independence in what was known as the Ukrainian People’s Republic, and which used the familiar blue and yellow flag as its national one. But by 1921, Bolsheviks had taken over in Ukraine and declared the Ukrainian Soviet Socialist Republic, which joined the Soviet Union in 1922.

Ukrainians faced forced starvation during the Holodomor in the 1930s, when millions of Ukrainians died in the famine and Ukrainian nationalism bloomed, becoming a target for the Soviet state.

Ukraine did not formally declare independence again until 1991 when the Soviet Union collapsed.

What will Ukraine’s future be?

Since the collapse of the Soviet Union, the story of Ukraine has been one of a country and a people trying to determine for themselves what they want their future to look like.

At the heart of the matter is whether Ukrainians want their country more aligned with Russia, or with Europe. And over the past decade, that choice has appeared to show greater support for Europe.

Ukraine is not currently part of NATO but did enshrine an amendment in its constitution in 2019 stating that joining NATO and the European Union were key strategic goals, with an aim to submit requests do so by 2023.

1:25
‘Prove that you are with us,’ Zelenskyy urges EU as Russia-Ukraine war rages

‘Prove that you are with us,’ Zelenskyy urges EU as Russia-Ukraine war rages – Mar 1, 2022

Putin demanded that NATO refuse membership to Ukraine in December 2021 prior to launching the invasion in February, and has threatened that NATO troops in Ukraine would be viewed as an escalation in the war.

“Putin is motivated by wanting to dominate his neighbours, particularly those neighbours that had belonged to the Soviet Union previously,” said Kasekamp.

“What he doesn’t want for these neighbouring countries like Ukraine is to be able to make decisions on their own,” he added, noting that Putin views the success of democracies neighbouring Russia as a “bad example” for the people under his own rule.

“NATO and the European Union are in that sense the opposite of what Putin would like.”

At the same time, Ukrainian President Volodymyr Zelenskyy says Ukrainians are fighting to defend the European ideals of democracy and freedom, and urged the European Union to “prove you are with us.”

Arel said phrases like colonization and decolonization may be ones that bring to mind the fights for self-determination by Indigenous peoples and people in territories under British or French imperial rule.

But it is also exactly what is happening now, he said.

“Now it’s literally blowing up into our face that this is exactly the dynamic going on between Moscow and Kyiv, when Putin is literally telling them that they are not real,” Arel said. “That’s colonialism.”

What happens next is not clear.

What is clear, is that political leaders and experts are increasingly worried about an escalation of violence from Russia. Deputy Prime Minister Chrystia Freeland ended a March 3 press conference grimly as she warned of a much-feared “bloodbath” by Russia.

“We as Canadians need to brace ourselves for that,” she said.

Both Arel and Kasekamp offered similarly dark forecasts of what may come.

“It’s difficult to see any end to this because the Ukrainians have demonstrated they’re willing to defend their homes and resist, and show great courage,” said Kasekamp. “And Putin has not shown any sign that he is lessening his demands or backing down. In fact, he’s been escalating.”

“That’s his modus operandi, to frighten and terrify his opponents until they give him what he wants,” he added. “There doesn’t seem to be any good ending. Everyone loses.”

Arel called the resilience shown so far by Ukrainians “astounding,” but wonders “is it sufficient?”

“The unknown, the intangible is the resistance … we have to remain both realistic that it’s going to get worse, and hopeful.”

Denial of responsibility! Yours Headline is an automatic aggregator of the all world’s media. In each content, the hyperlink to the primary source is specified. All trademarks belong to their rightful owners, all materials to their authors. If you are the owner of the content and do not want us to publish your materials, please contact us by email – [email protected]. The content will be deleted within 24 hours.
politics.RussiaRussia invades UkraineRussia NewsRussia Ukrainerussia ukraine warUkraineUkraine NATO membership
0
Share

Democrats will lose midterms if referendum on Biden: Psaki

California jails are trying to keep fentanyl out, but inmates are still dying