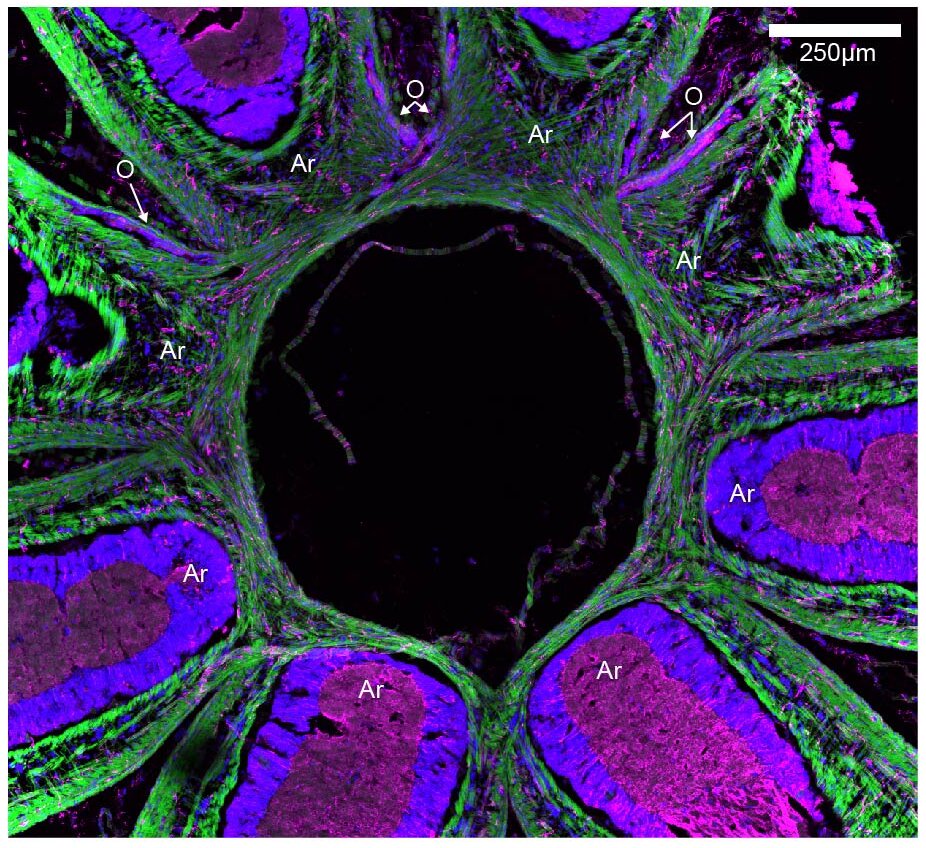 Octopuses are not much like humans—they are invertebrates with eight arms, and more closely related to clams and snails. Still, they have evolved complex nervous systems with as many neurons as in the brains of dogs, and are capable of a wide array of complicated behaviors. In the eyes of Melina Hale, Ph.D., and other researchers in the field, this means they provide a great opportunity to explore how alternative nervous system structures can serve the same basic functions of limb sensation and movement.

Now, in a new study published on November 28 in Current Biology, Hale, William Rainey Harper Professor of Organismal Biology and Vice Provost at UChicago, and her colleagues have described something new and totally unexpected about the octopus nervous system: a structure by which the intramuscular nerve cords (INCs), which help the animal sense its arm movement, connect arms on the opposite sides of the animal.

The startling discovery provides new insights into how invertebrate species have independently evolved complex nervous systems. It can also provide inspiration for robotic engineering, such as new autonomous underwater devices.

“In my lab, we study mechanosensation and proprioception—how the movement and positioning of limbs is sensed,” said Hale. “These INCs have long been thought to be proprioceptive, so they were an interesting target for helping to answer the kinds of questions our lab is asking. Up until now, there hasn’t been a lot of work done on them, but past experiments had indicated that they’re important for arm control.”

Thanks to the support for cephalopod research offered by the Marine Biological Laboratory, Hale and her team were able to use young octopuses for the study, which were small enough to allow the researchers to image the base of all eight arms at once. This let the team trace the INCs through the tissue to determine their path.

“These octopuses were about the size of a nickel or maybe a quarter, so it was a process to affix the specimens in the right orientation and to get the angle right during the sectioning [for imaging],” said Adam Kuuspalu, a Senior Research Analyst at UChicago and the lead author on the study.

Initially the team was studying the larger axial nerve cords in the arms, but began to notice that the INCs didn’t stop at the base of the arm, but rather continued out of the arm and into the body of the animal. Realizing that little work had been done to explore the anatomy of the INCs, they began to trace the nerves, expecting them to form a ring in the body of the octopus, similar to the axial nerve cords.

Through imaging, the team determined that in addition to running the length of each arm, at least two of the four INCs extend into the body of the octopus, where they bypass the two adjacent arms and merge with the INC of the third arm over. This pattern means that all the arms are connected symmetrically.

It was challenging, however, to determine how the pattern would hold in all eight arms. “As we were imaging, we realized, they’re not all coming together as we expected, they all seem to be going in different directions, and we were trying to figure out how if the pattern held for all of the arms, how would that work?” said Hale.

“I even got out one of those children’s toys—a Spirograph—to play around with what it would look like, how it would all connect in the end. It took a lot of imaging and playing with drawings while we wracked our brains about what could be going on before it became clear how it all fits together.”

The results were not at all what the researchers expected to find.

“We think this is a new design for a limb-based nervous system,” said Hale. “We haven’t seen anything like this in other animals.”

The researchers don’t yet know what function this anatomical design might serve, but they have some ideas. “Some older papers have shared interesting insights,” said Hale.

“One study from the 1950s showed that when you manipulate an arm on one side of the octopus with lesioned brain areas, you’ll see the arms responding on the other side. So it could be that these nerves allow for decentralized control of a reflexive response or behavior. That said, we also see that fibers go out from the nerve cords into the muscles all along their tracts, so they might also allow for a continuity of proprioceptive feedback and motor control along their lengths.”

The team is currently conducting experiments to see if they can gain insights into this question by parsing out the physiology of the INCs and their unique layout. They are also studying the nervous systems of other cephalopods, including squid and cuttlefish, to see if they share similar anatomy.

Ultimately, Hale believes that in addition to illuminating the unexpected ways an invertebrate species might design a nervous system, understanding these systems can aid in the development of new engineered technologies, such as robots.

“Octopuses can be a biological inspiration for the design of autonomous undersea devices,” said Hale. “Think about their arms—they can bend anywhere, not just at joints. They can twist, extend their arms, and operate their suckers, all independently. The function of an octopus arm is a lot more sophisticated than ours, so understanding how octopuses integrate sensory motor information and movement control can support the development of new technologies.”

To know where the birds are going, researchers turn to citizen science and machine…