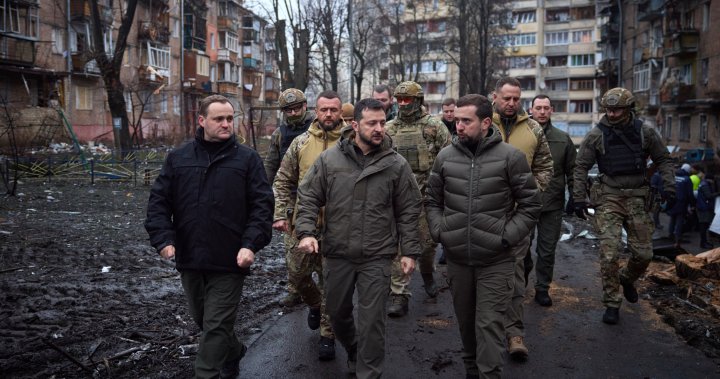 Skirmishes continued in the east and residents from the southern city of Kherson headed north and west to flee after punishing, deadly bombardments by Russian forces in recent days. The strikes have been seen as attempts at Russian retribution against Ukraine’s beleaguered but defiant people after Ukrainian troops over two week ago liberated the city that had been in Russian hands for many months.

“The key task of today, as well as other days of this week, is energy,” Zelenskyy said in his nightly televised address late Friday. “From Wednesday to today we have managed to halve the number of people whose electricity is cut off, to stabilize the system.”

Winter clothing drive this weekend in Kelowna for refugee Ukrainians

He said, however, that blackouts continued in most regions, including Kyiv, the capital.

He allowed himself a rare show of pique about how Kyiv authorities were faring, alluding to “many complaints” with the rollouts of “points of invincibility” — public centers where residents can stock up on food, water, battery power and other essentials — in the capital.

“Please pay attention: Kyiv residents need more protection,” he said. “As of this evening, 600,000 subscribers have been disconnected in the city. Many Kyiv residents were without electricity for more than 20 or even 30 hours.”

“I expect quality work from the mayor’s office,” he said, alluding to the administration of Mayor Vitali Klitschko.


The president and the mayor have sporadically sparred since Zelenskyy took office in 2019. Zelenskyy has accused Klitschko and officials around him of corruption, while Klitschko contends the president’s office has put him under political pressure.

Early Saturday, the Kyiv municipal administration said water connections had been restored throughout the city, but that about 130,000 residents remain without electricity.

City authorities said Saturday morning that all power, water, heating and communication services would be restored within 24 hours.

Meanwhile, Ukrainians were marking the 90th anniversary of the start of the “Holodomor,” or Great Famine, that killed more than 3 million people over two years as the Soviet government under Josef Stalin confiscated food and grain supplies and deported many Ukrainians.

German Chancellor Olaf Scholz marked the commemoration by drawing parallels with the impact of the war on Ukraine — a key supplier of wheat, barley, sunflower oil and other foodstuffs — on world markets. Exports from Ukraine have resumed under a U.N.-brokered deal but have still been far short of pre-war levels, driving up global prices.

“Today, we stand united in stating that hunger must never again be used as a weapon,” Scholz said in a video message. “That is why we cannot tolerate what we are witnessing: The worst global food crisis in years with abhorrent consequences for millions of people — from Afghanistan to Madagascar, from the Sahel to the Horn of Africa.”

He said a World Food Program ship was in the process of delivering Ukrainian grain to Ethiopia, and Germany was adding another 10 million euros to efforts to help expedite grain shipments from Ukraine.


In Kherson, residents continued to flee _ or try to. A salvo of missiles struck the recently liberated city for a second day on Friday.

“I have no money, I can’t even buy gas for the car,” said Iryna Rusanovska, standing on the street near the bodies of three people who died from a strike on Thursday. She said wants to take her family to western Ukraine or out of the country.

Some 100 Kherson residents hopped aboard a government-chartered train in a first organized evacuation on Friday, and buses were expected to ferry others to shelters in the cities of Odesa, Mykolaiv and Kryvyi Rih, the Ministry of Reintegration said.

Denial of responsibility! Yours Headline is an automatic aggregator of the all world’s media. In each content, the hyperlink to the primary source is specified. All trademarks belong to their rightful owners, all materials to their authors. If you are the owner of the content and do not want us to publish your materials, please contact us by email – [email protected]. The content will be deleted within 24 hours.
Russiarussia ukraine warUkraineUkraine newsUkraine Power OutageUkraine warUkraine war Vladimir Putinwhy is russia attacking ukraine
0
Share

On brink of extinction, monarch numbers up for second year