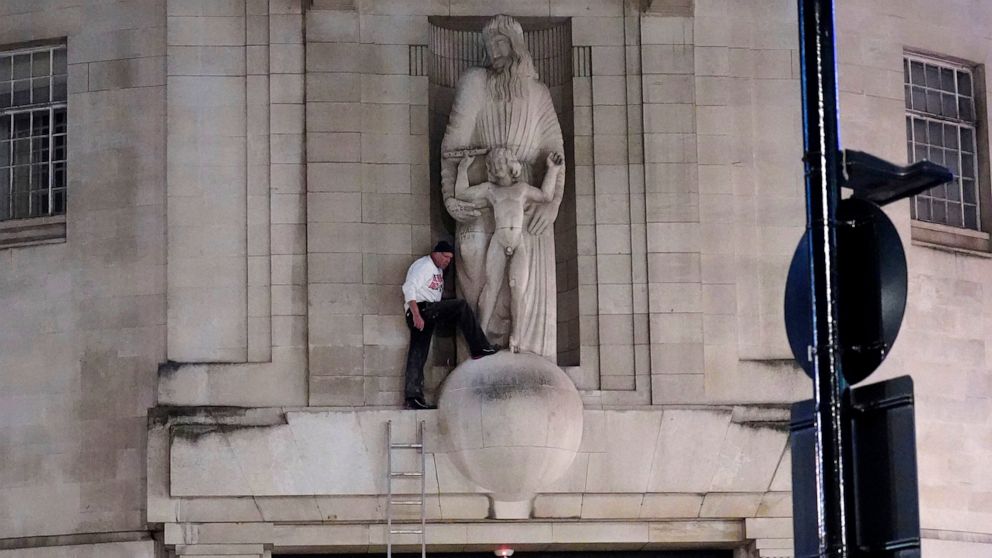 LONDON — British police on Wednesday cordoned off an area outside the BBC’s Broadcasting House in central London after a man was spotted scaling the building and using a hammer to attack a statue by controversial sculptor Eric Gill.

Officers and ambulance workers rush to the scene after receiving reports that a man had used a ladder to reach the 10-foot-tall sculpture above the building’s front entrance. The sculpture, depicting Ariel and Prospero from the Shakespeare play “The Tempest,” was installed in the 1930s.

It was created by Gill, a prominent British artist who died in 1940. His diaries, which were published decades after his death, revealed that he sexually abused his daughters and the family dog.

The sculpture had previously drawn criticism and activist groups have demanded its removal.

The Metropolitan Police said officers attempted to “engage with the man,” and that another man was arrested on suspicion of conspiracy to commit criminal damage.

The incident came a week after a jury cleared four protesters of criminal damage after they pulled down a statue of 17th-century slave trader Edward Colston during a Black Lives Matter demonstration in the city of Bristol in June 2020. The four protesters, who threw the statue into the harbor after toppling it, were acquitted on Jan. 5 following an 11-day trial.

Denial of responsibility! Yours Headline is an automatic aggregator of the all world’s media. In each content, the hyperlink to the primary source is specified. All trademarks belong to their rightful owners, all materials to their authors. If you are the owner of the content and do not want us to publish your materials, please contact us by email – [email protected]. The content will be deleted within 24 hours.
Arts and entertainmentCrimeEnglandEuropeGeneral newsLondonSculptureUnited Kingdom
0
Share

San Francisco had at least 120 restaurant closures in 2021

Arjun Kapoor on his wedding plans with Malaika Arora: Not now, I would really like to…

Drake Reacts To Father’s Weird Tattoo Of Him: ‘Why You Do Me Like…

Simply Red: Smooth as ever at Hatfield House | Music | Entertainment