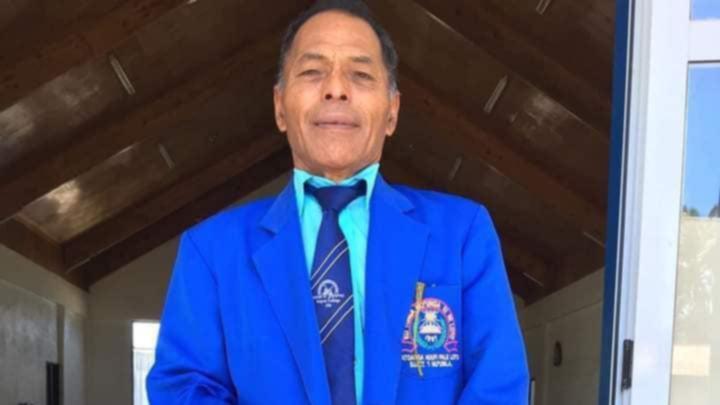 A 57-year-old Tongan man who says he was in the water for around 27 hours after being swept out to sea during Saturday’s devastating tsunami has been hailed a ‘real life Aquaman’.

The eruption of the Hunga Tonga-Hunga Ha’apai volcano on Saturday killed at least three people, sent tsunami waves rolling across the archipelago, damaging villages, resorts and many buildings and knocked out communications for the nation of about 105,000 people.

Lisala Folau, who lived on the small, isolated island of Atata which has a population of about 60 people, was swept out to sea when the waves hit land at about 7pm local time on Saturday, he said in a radio interview with Tongan media agency Broadcom Broadcasting.

Folau said he was painting his home when he was alerted about the tsunami by his brother, and soon the waves had gone through his lounge.

“It was dark and we could not see each other. Very soon I could not hear my niece calling any more, but I could hear my son calling,” he said.

He climbed on a tree to escape but when he got down another big wave swept him away, he said.

The 57-year-old said he is disabled and cannot walk properly.

“I left everything and try to escape but bear in mind that I am disabled,” he told the radio station.

“I can’t walk properly, both my legs are not working properly and when I can, I believe a baby can walk faster than I.

“So I just floated, bashed around by the big waves that kept coming. It stayed with my mind if I can cling to a tree or anything and if anything happens and I lose my life, searchers may find me and my family can view my dead body.”

Folau said he kept floating, and slowly managed to swim 7.5km to the main island of Tongatapu, reaching the shore 27 hours later at about 10pm on Sunday.

Reuters was unable to contact Folau or verify the events, but the senior editor of the radio station shared a translated transcript of Folau’s interview on Facebook shortly after the recording.

The story of Folau’s heroics went viral among Tongan groups on Facebook and other social media.

Atata, which is about 8km northwest of Tonga’s capital Nuku’alofa, or a 30-minute boat ride, has been almost entirely destroyed in the tsunami that hit the islands.

Tongan naval boats are still surveying the smaller islands and evacuating people to the main islands.

More ships and aircraft carrying aid are due to arrive in Tonga in coming days as the international community responds to calls for urgent assistance from the Pacific island nation.

The first flights from Australia and New Zealand landed in Tonga on Thursday with much-needed supplies of water for sanitation and hygiene as well as shelter, communication equipment and power generators.

A New Zealand maritime sustainment vessel HMNZS Aotearoa carrying 250,000 litres of water and able to produce 70,000 litres per day through a desalination plant, is expected to arrive in Tonga on Friday.

A second Australian aid flight had to turn back on Thursday due to in-flight issues and is now expected later on Friday, the Australian High Commission in Tonga said on Facebook.

More help is on the way with HMAS Adelaide en route from Brisbane and due in Tonga next week, it said.

The Hunga Tonga-Hunga Ha’apai volcano erupted with a deafening explosion on Saturday, triggering tsunamis that destroyed villages, resorts and many buildings and knocked out communications for the nation of about 105,000 people.

Ash has blanketed the archipelago and spoiled much of its drinking water.

United Nations spokesman Stephane Dujarric said in a briefing that Tonga has asked for urgent assistance and the agency is in close contact with the authorities.

Some 60,000 people have been affected by damage to crops, livestock, and fisheries due to ashfall, saltwater intrusion and the potential for acid rain.

There are also reports of fuel shortages.

Telephone links between Tonga and the outside world were reconnected late on Wednesday, although restoring full internet services is likely to take a month or more.

Tongans have turned to social media to post images of the destruction by the tsunami and give accounts of their shock after the massive explosion.

The king also received a message of condolence on Thursday from Queen Elizabeth, who said she was “shocked and saddened” by the devastation.

“It must be incredibly difficult for those who are unable to contact friends and family while communications are disrupted, and I hope that they will soon be restored,” the Queen said.

NASA’s Goddard Space Flight Center has said the force of the eruption was estimated to be the equivalent of five to 10 megatons of TNT, or more than 500 times that of the nuclear bomb the United States dropped on the Japanese city of Hiroshima at the end of World War II.

Denial of responsibility! Yours Headline is an automatic aggregator of the all world’s media. In each content, the hyperlink to the primary source is specified. All trademarks belong to their rightful owners, all materials to their authors. If you are the owner of the content and do not want us to publish your materials, please contact us by email – [email protected]. The content will be deleted within 24 hours.
Natural disastersNewsTongatsunamiVolcanoes & EruptionsweatherWorld News
0
Share

How could Russia react to Finland, Sweden joining NATO