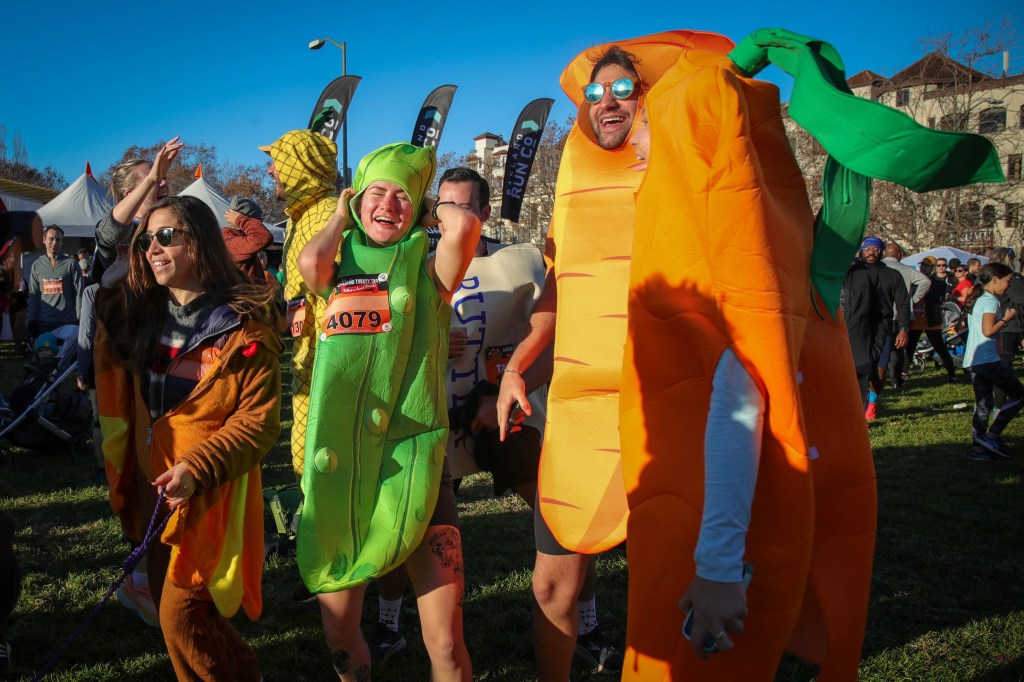 Despite all outward appearances — the faux plumage, the yellow beak, a pair of wings at the ready — Soyoung Kim proved to be no turkey on a sunny Thanksgiving morning.

Even if she appeared, in her own words, overly cooked.

“I’m going to become a dry-as-a-bone turkey after this,” said Kim, laughing while wearing a sweltering, head-to-toe turkey outfit for a morning run.

Thousands of people — many of them dressed in turkey outfits accented with pairs of running shoes — galloped along Lake Merritt and through downtown Oakland on Thursday morning for the Oakland Turkey Trot. The annual 5-kilometer race was among several pre-Thanksgiving meal running events held Thursday across the Bay Area, including in San Francisco, San Jose and Walnut Creek.

Each of them offered a chance for residents to work off a few calories before the day’s belt-busting activities, often while raising money for charities across the region.

“It’s all about community-building, one turkey leg at a time,” said Eduardo Neal, 51, who, like Kim, donned a turkey suit for the affair.

At least 4,200 people participated in Oakland’s race, which was expected to raise about $50,000 for a slew of nonprofits and charities across the city, said Ryan Dawkins, the race’s director. Those beneficiaries included the Alameda County Community Food Bank, the A-Z Fund at the Oakland Public Education Fund and Running for a Better Oakland.

The festivities represented a return to normalcy for race organizers after the pandemic took a sizeable bite out of signups and donations for the annual gathering. Organizers opted to hold 2020’s event virtually — allowing people to run 5 kilometers on their own, rather than participate as one large group. Despite returning to Lake Merritt last year, only about 3,200 people showed up for the 2021 event.

Fundraising also took a hit, with only slightly more than $20,000 raised during last year’s race, Dawkins said. This year’s total looked to end up closer to the tally in 2019, when $50,000 was raised among about 5,000 participants.

“I feel like people were more in the giving mood this year,” Dawkins said.

For most participants, the event offered a chance to earn an extra slice of pie and a second helping of stuffing in the hours to come.

Mayor Libby Schaaf joined in a pre-race countdown, cheering on the hordes of galloping gobblers as they jogged down Lakeshore Avenue near The Pergola at Lake Merritt,

“It just shows the beauty of Oakland — look at this weather, look at this community,” Schaaf said. “There is much to be grateful for.”

TJ Hadidian, 30, brought the whole spread. Dressed as a stick of butter, he stood flanked by friends and family dressed as a carrot, an ear of corn, a green bean casserole, a piece of gingerbread, cranberry sauce, a pickle, a pineapple and — of course — a turkey.

The point wasn’t to go fast, he said. It was just to make it to the finish line.

Flaunting a hat in the shape of a pumpkin pie — complete with a dollop of whipped cream — Alisa Lai called the gathering something even greater: A true Thanksgiving Day tradition, one as necessary as the baked dessert sitting atop her head.

“We have a lot to be thankful for,” said Lai, 38, of Pleasanton. “One of the things about the running community is you can make friends that become family. That’s kind of what Thanksgiving’s about.”

Not to mention, it also helped make room in her belly for the feast to come.

“I feel less guilty — I feel like if I have two slices of pie, that’s OK, because I ran three miles,” Lai added. “It’s a balancing act.”

Nifty today: SGX Nifty down 40 points; here’s what changed for market while you were sleeping