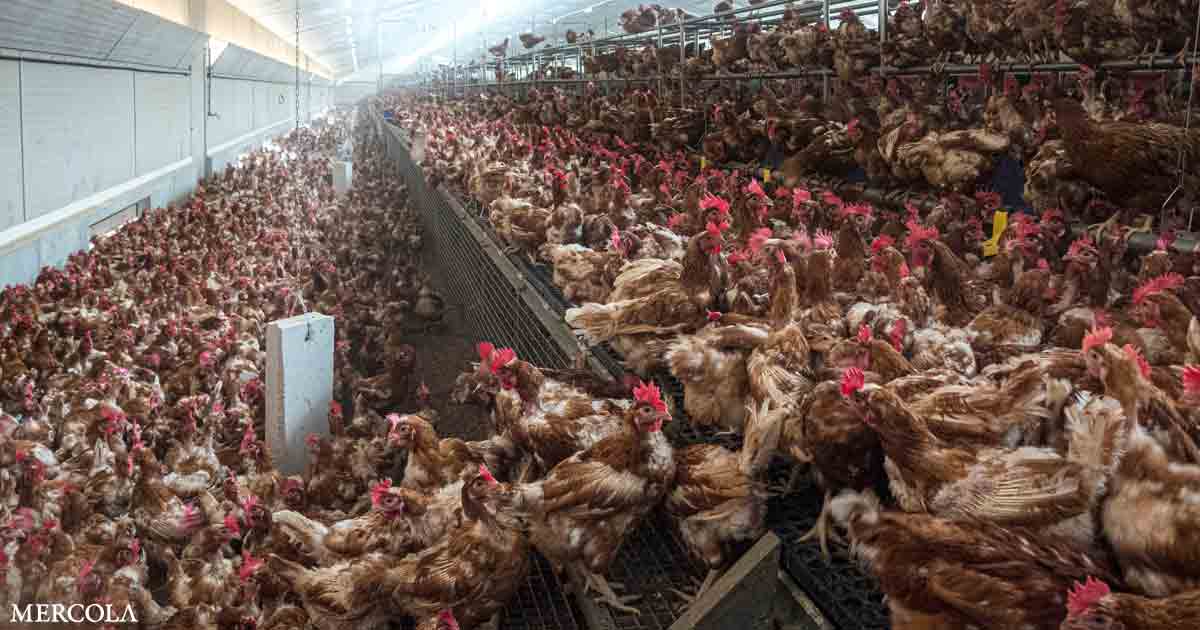 This article was previously published July 11, 2020, and has been updated with new information.

In the video podcast above, Dr. Paul Saladino and science journalist and author Nina Teicholz — who is also executive director of The Nutrition Coalition — review the evidence against chicken, and why saturated fat really qualifies as a health food.

Why Conventional Chicken May Contribute to Poor Health

As noted by Saladino, while consumption of red meat is on the decline, thanks to the vilification of red meat and saturated fat, people are eating more and more chicken.

Long thought of as a healthier type of meat, primarily because it’s leaner than red meat, the problem with conventional chicken is that they’re fed corn — typically GMO varieties that are farmed with glyphosate.

Increasingly, we’re finding that trans fats and polyunsaturated fat from vegetable oils are far worse for your health, and a greater contributor to chronic disease, than added sugar. And what happens when chicken is fed corn? The meat becomes high in omega-6 linoleic acid, as corn is high in this type of fat.1

As Saladino points out, high chicken consumption actually adds to your vegetable oil consumption. While you need some omega-6, the amounts obtained from a standard American diet high in processed foods are far too high for health. High omega-6 intake also skews your omega-3 to omega-6 ratio, which ideally would be close to 1-to-1.

As noted by Saladino and Teicholz, 60% of the U.S. population has chronic disease, nearly 70% are overweight or obese, and recent NHANES data2 reveal 87.8% of Americans are metabolically unhealthy, based on five parameters. That data is over 4 years old now, so the figure is clearly greater than 90% of the population today.

That means virtually everyone is at risk for Type 2 diabetes and all the chronic diseases associated with insulin resistance, which run the gamut from cancer to Alzheimer’s. Simply assuming you are one of the 12.2% (from the 4-year-old figures) that are metabolically healthy would be risky business.

Part of why chronic ill health is so widespread is this persistent idea that saturated animal fats are unhealthy, and should be replaced with industrial vegetable oils.3

On the upside, Teicholz reviews a 2020 paper4 in the Journal of the American College of Cardiology, which actually admits the long-standing nutritional guideline to limit saturated fat has been incorrect. This is a rather stunning admission, and a huge step forward. As noted in the abstract:

“The recommendation to limit dietary saturated fatty acid (SFA) intake has persisted despite mounting evidence to the contrary. Most recent meta-analyses of randomized trials and observational studies found no beneficial effects of reducing SFA intake on cardiovascular disease (CVD) and total mortality, and instead found protective effects against stroke.

Although SFAs increase low-density lipoprotein (LDL)-cholesterol, in most individuals, this is not due to increasing levels of small, dense LDL particles, but rather larger LDL which are much less strongly related to CVD risk.

It is also apparent that the health effects of foods cannot be predicted by their content in any nutrient group, without considering the overall macronutrient distribution.

Whole-fat dairy, unprocessed meat, eggs and dark chocolate are SFA-rich foods with a complex matrix that are not associated with increased risk of CVD. The totality of available evidence does not support further limiting the intake of such foods.”

How Did We Go so Wrong?

They also discuss the reasons why this myth has been allowed to persist, despite the scientific evidence against it. In short, the low-fat, low-cholesterol myths promulgated by Keys in the ’60s rapidly led to dramatic changes in the food and drug industries, and these behemoths are incredibly reluctant to relinquish what have become highly profitable businesses.

Saladino and Knobbe are both equally convinced that the massive increase in linoleic acid (omega-6 polyunsaturated fat found in industrial vegetable oils) is a key metabolic driver of obesity, heart disease, cancer and other chronic disease. They review several studies6,7,8,9,10,11,12 demonstrating the truth of this.

Importantly, they also review the incorrect belief that high LDL is a risk factor for heart disease, and that by lowering your LDL, you lower your risk of a heart attack. The science simply doesn’t bear this out, and the reason for this is because not all LDL particles are the same.

By cutting down on red meat and saturated fat and eating more vegetable oil and chicken for example (which again will count toward your vegetable oil or polyunsaturated fat intake), your LDL may go down, but those LDLs are now going to be oxidized, and no one is testing for oxidation. Oxidized LDL, Saladino explains, will in turn trigger insulin resistance and related problems, including heart disease.

Eating saturated fat, on the other hand, may raise your LDL, but those LDL particles will be large and “fluffy,” and do not cause any arterial damage. Many studies have demonstrated that high LDL has nothing to do with heart disease. High LDL does not raise your risk of heart disease per se, but oxidized LDL do.

Teicholz also makes another important point, in that the saturated fat myth has been one of the most thoroughly and comprehensive hypotheses in the history of nutritional science, and it has failed miserably.

She also details how avoiding saturated animal fats causes you to end up with nutritional deficiencies, as animal foods and fats are also rich in micronutrients. Industrially processed vegetable oils are not. As noted by Teicholz, “foods high in saturated fats are the most nutrient-dense foods on the planet.” These nutrients are also highly bioavailable.

Meanwhile, the diet recommended by our Dietary Guidelines for Americans does not actually meet nutritional goals. As a result, the most disadvantaged among us — impoverished school children who rely on school meals, hospital patients and the elderly who are in long-term care facilities, for example — are being disproportionally harmed, as they have few if any options to make healthier food choices.

The Benefits of Carnosine

In addition to saturated fat and the vitamins and minerals it contains, red meat is also an important source of carnosine, a dipeptide (two amino acids put together) made up of beta-alanine and histidine. Carnosine is only found animal products. It serves as a scavenger or sink for reactive carbonyl groups — intermediaries that go on to form advanced lipoxidation end-products.

If you can grab these carbonyls before they attack proteins and fats, you can essentially stop the vicious cycle resulting in catastrophic peroxidation. Diets that exclude animal products and meat will lower your carnosine level, and carnosine is a really important nutrient to limit the damage from oxidation products. It’s also important for mitochondrial function.

Summary of Why Saturated Fats Are so Crucial

Toward the end of his podcast, around one hour and 44 minutes in, Saladino offers a comprehensive summary of the entire discussion. Here’s a quick review of his key points:

As discussed in an interview with Dr. Chris Knobbe, the polyunsaturated fats from vegetable oils, seed oils and trans fats are mostly stored in your fat cells (opposed to being used for fuel), and have a half-life of 600 to 680 days.13

They also get incorporated into tissues, including your heart and brain. Who in their right mind would want a highly oxidizable oil saturating their organs for years? One result of this could be memory impairment and increased risk of Alzheimer’s disease, which is exactly what they found with canola oil.14 As reported in one 2017 study:15

“Our findings do not support a beneficial effect of chronic canola oil consumption on two important aspects of AD pathophysiology which includes memory impairments as well as synaptic integrity. While more studies are needed, our data do not justify the current trend aimed at replacing olive oil with canola oil.”

In the interview, Knobbe explained the harms of vegetable oils and, like Saladino and Teicholz, reviewed why they are a root cause behind virtually all chronic diseases.

Minimum 6 airbags to be made mandatory in vehicles carrying up to 8 passengers from Oct: MoRTH

N95 masks to be distributed free to public

4,132 people in Ontario hospitals with COVID, 589 in intensive care

Vitamin deficiency: ‘One in five’ are lacking vitamin D – symptoms