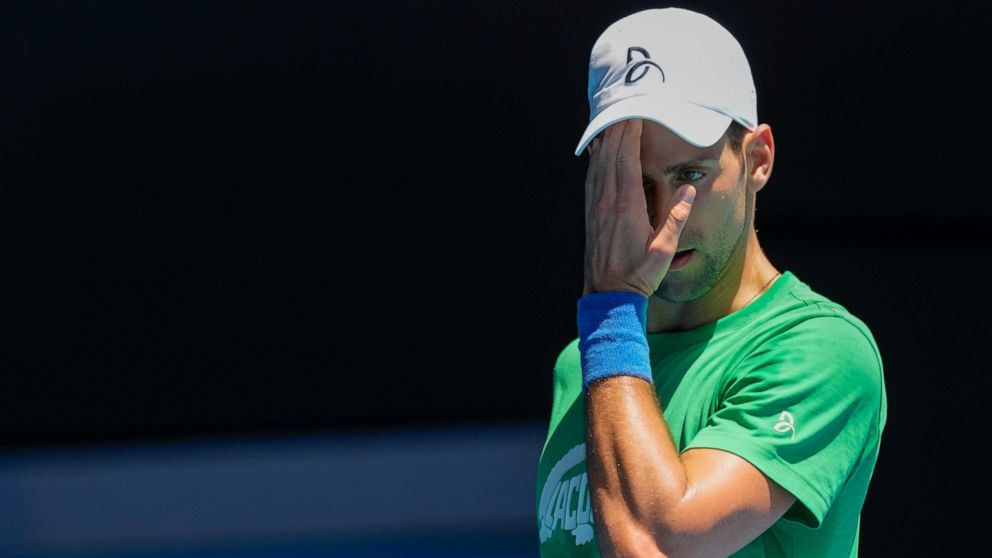 BELGRADE, Serbia — Novak Djokovic’s supporters in Serbia were dismayed Friday after waking up to the news that the top-ranked tennis player again faces deportation from Australia after his visa was revoked for a second time.

Australia’s immigration minister used his ministerial discretion to cancel the 34-year-old Serb’s visa on public interest grounds — only three days before play begins at the Australian Open. Djokovic is the defending champion at the season’s first Grand Slam tournament and has won a record nine of his 20 major titles at Melbourne Park.

Djokovic’s lawyers again appealed at a court in Melbourne, which they successfully did last week on procedural grounds after his visa was first canceled when he landed in Melbourne and spent four nights in an immigration detention center.

Djokovic initially refused to say if he had been vaccinated against the coronavirus, but he got an exemption from Australia’s strict COVID-19 vaccination regulations to enter the country the first time. He said this week he is unvaccinated.

If deported, Djokovic is likely to return to Serbia, where his saga has captivated the public and where he has an almost iconic status and overwhelming support.

Djokovic’s former coach and mentor, Niki Pilic, described the situation as “shameful” and said Djokovic was being treated like a “criminal.”

“People do not understand what it means to be a world champion, what kind of strength, will and morale is needed,” Pilic said. “It’s not the end of the world if he doesn’t play the Australian Open … he will play at other tournaments.”

Nebojsa Covic, a former politician and now the owner of the Red Star Belgrade basketball club, said the controversy has made Djokovic “a symbol of the free world” no matter what happens.

“He is a global star, a beacon of free men. Basic human rights are being violated,” Covic told Prva TV. “Djokovic is the moral winner of the tournament in Australia.”

Denial of responsibility! Yours Headline is an automatic aggregator of the all world’s media. In each content, the hyperlink to the primary source is specified. All trademarks belong to their rightful owners, all materials to their authors. If you are the owner of the content and do not want us to publish your materials, please contact us by email – [email protected]. The content will be deleted within 24 hours.
Australian Open Tennis ChampionshipsBelgradeeaEuropeGeneral newsGovernment and politicsGovernment regulationsImmigration
0
Share

Did you solve it? Gödel’s incompleteness theorem | Mathematics

Nets’ Durant to be out through All-Star break

After coasting to share of lead, Converge and NLEX face adversity