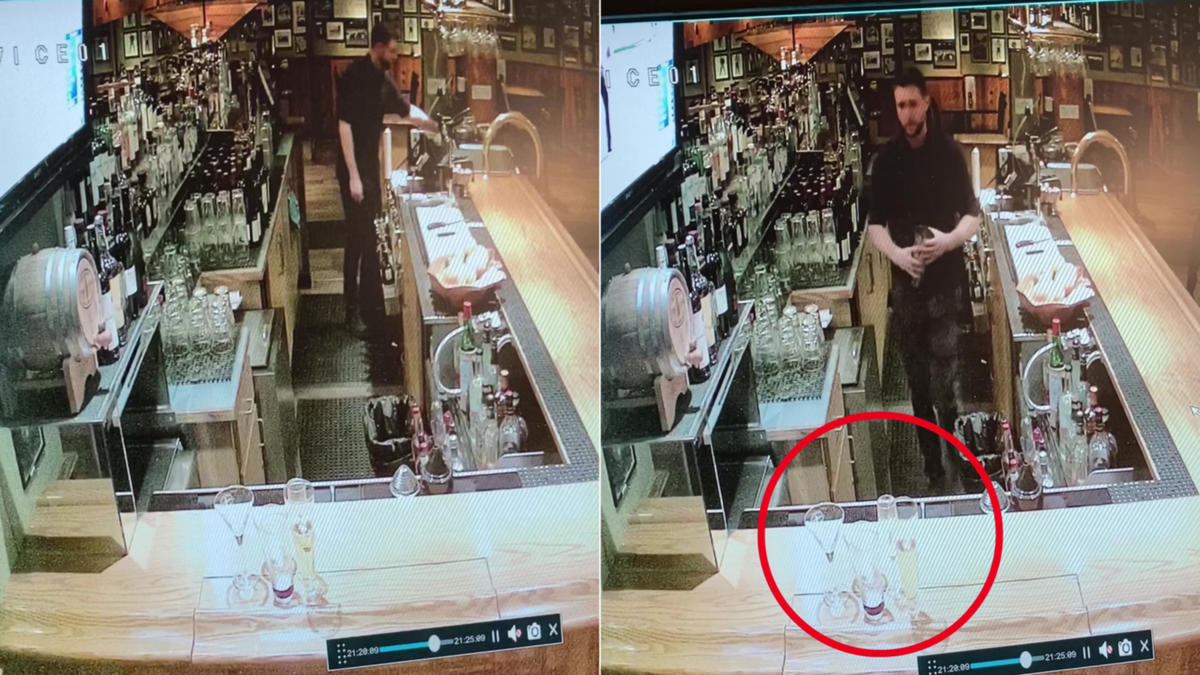 A pub boss claims to have captured ‘the ghost of a thirsty punter’ sliding a pint glass across their ‘haunted’ bar.

Workers were cleaning Pine Tavern Restaurant, in Bend, Oregon, US, after closing time when one was overcome by ‘a chill’ and a feeling he wasn’t alone.

Watch the haunting footage in the video above

For more Offbeat related news and videos check out Offbeat >>

Eerie CCTV footage shows the bartender clearing the counter when a half-full pint glass moves a few inches, then when he turns his back it quickly slides even further.

The pub manager, who refused to be named, says he used to mock claims the restaurant was haunted but now admits the video looks ‘so unnatural’ it’s made him believe there’s the presence of ‘an old regular wanting a beer’.

The clip, shot at 10pm on March 29, has been posted to the 86-year-old establishment’s Facebook page and it’s since been viewed almost 200,000 times.

However sceptics have accused the venue of faking the haunting in a bid to drum up business.

The pub manager said: “When I first saw it, I thought it’s just so unnatural. The glass moves so quickly.

“There was no earthquake or someone moving a giant truck down the street. It was late at night. There might have been condensation on the bar but nothing that would make it fly like that.

“When the barman told me he felt as if something was in the bar, but it was only me and I was upstairs. When we checked the footage he immediately realised that’s what felt.

“I believe in the paranormal more than I did before. I used to mock people when they said ‘maybe it’s the ghost of the Pine Tavern’, but maybe it is!

“It’s a super old restaurant and I’m starting to believe that there is a presence. Maybe it was one of the original owners or a really drunk, old regular who wants a beer.

“We’ve had ghost hunters calling to hunt down the ghost. Two paranormal teams are wanting to investigate.

“It’s been a real mixed reaction. People think we’re trying to trick people and other people believe it. People can decide what they want.”

The manager says one colleague has even planted a flower-filled vase on the spot the glass moved to ‘calm down the ghost’.

The Pine Tavern claims to be the oldest restaurant in Bend and was established to feed nearby loggers in 1936.

It’s thought the ghosts of previous owners haunts the building and both staff and customers have felt the presence of something supernatural while inside.

The Pine Tavern’s post said: “If this doesn’t give you the heebie jeebies I don’t know what will!

“Tonight after closing our bartender said he felt a chill when he was cleaning up and swears something was in the bar with him.

“We had to check the footage. Pine Tavern has a long history of ghostlore but this is the first paranormal thing we’ve ever caught on camera.”

Many viewers were impressed by the footage and some suggested it could be the ghost caught on camera.

One commented: “OMG that’s so awesome I love it!!!”

Another added: “That ghost wanted a drinkety-drink lol.”

One pub worker said: “I just want to say for all of the people who are sceptical because all of the glasses on one spot on the bar, this is very normal.

“I work in a bar as a server and we always drop our empty bar glasses on one rectangle mat at the bar for them to put in the dishwasher. This is trippy.”

However not all viewers were convinced.

One former employee commented: “I worked there. Heard ghost stories. If you actually pay attention to the video, it looks as if the bartender has a remote, randomly the glasses are the only ones at the bar in the only marked rectangle.

The Pine Tavern replied: “I assure you we don’t have glasses with a remote control.”

Another said: “Since it slid at six seconds then again at 12 seconds, yes condensation would be the reason. If not then, oh, well that’s cool I guess.”

Denial of responsibility! Yours Headline is an automatic aggregator of the all world’s media. In each content, the hyperlink to the primary source is specified. All trademarks belong to their rightful owners, all materials to their authors. If you are the owner of the content and do not want us to publish your materials, please contact us by email – [email protected]. The content will be deleted within 24 hours.
EntertainmentLifestyleOffbeat
0
Share

Microsoft adds new gaming features to the Edge browser: What is it