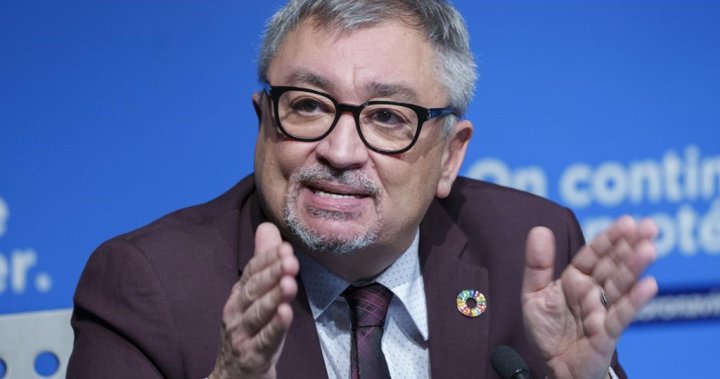 The abrupt departure of Quebec’s public health director last week was further evidence of the rocky road being navigated by the country’s chief medical officers as the Omicron wave pushes the pandemic fight toward a third year.

Quebec’s Dr. Horacio Arruda, who had been public health director since 2012, cited criticism about the government’s handling of the latest wave as he abruptly resigned Monday after 22 months overseeing the province’s pandemic response.

“Recent comments about the credibility of our opinions and our scientific rigour are undoubtedly causing a certain erosion of public support,” Arruda wrote in a letter offering his resignation.

It was a far cry from March 2020, when Arruda was among the group of top provincial health officers on the job when the pandemic hit. Arruda and the others, including B.C.’s Dr. Bonnie Henry, Alberta’s Dr. Deena Hinshaw and Nova Scotia’s Dr. Robert Strang, rose to prominence almost overnight, offering reassuring voices in a time of crisis.

“In the beginning, when we didn’t know what we didn’t know, and there was a great deal of uncertainty, the chief medical officer played an incredibly useful role, as they are intended to do – to be the public face of government and explain what is going on,” said Patrick Fafard, a University of Ottawa professor of public and international affairs who has been studying the role of the country’s medical officers.

“Their status in media terms or public opinion has declined – some of that is inevitable, but it’s also because of the tensions and contradictions in the role.”

Fafard said while the medical officers play an advisory role, each province views the role differently. In an extended pandemic, when the scientific evidence is evolving quickly, they’ve had to reconcile diverging views and governments that don’t make decisions based on science alone. They are often left to explain the policies, even though the decisions ultimately lie with the politicians.

2:44
New modelling data shows people over 70 are still more likely to be hospitalized with COVID

Most of those on the job in 2020 remain in place, with the exception of Arruda and Ontario’s Dr. David Williams, who had been subject to criticism before he retired last year.

In British Columbia, Henry has become known for her signature saying, “Be kind, be calm, be safe,” which has been emblazoned on posters, T-shirts, masks and even a “Dr. Henry shoe” designed in her honour. Lauded as an effective communicator for her encouraging tone during briefings, Henry has also faced criticism for steadfastly defending her stance against the widespread use of rapid tests.

COVID-19: Why doctors warn against letting your guard down against Omicron

In Alberta, Hinshaw, has gone from being lionized to harshly criticized. In early 2020, her visage was etched on clothing and designer prints as she became the face of a prudent provincial government implementing health restrictions to protect Albertans and their health system.

But in subsequent waves, as Premier Jason Kenney’s government delayed implementing new restrictions and the health system threatened to buckle, Hinshaw got caught up in the whipsaw between Albertans who wanted more restrictions and those who wanted fewer. The nadir came last summer in the fourth wave, when thousands of surgeries were cancelled and the Armed Forces were called in to help.

Kenney and Hinshaw conceded they helped set the stage by ending health restrictions too soon in June, despite the rise of the Delta variant. Kenney took responsibility for the mistake but also said he would have taken action if Hinshaw had recommended it.

“Sometimes politicians are not helping, because they refer to the advice they receive from their public health officials,” said Daniel Beland, a McGill University political science professor. “In the end, it’s important to understand the responsibility for these decisions lies with the elected officials, not the civil servants.”

Omicron and vaccines: Experts break down the science behind COVID-19 jabs

The distinction is not always understood by the public, and amid tougher measures in Quebec, Prince Edward Island, Saskatchewan and Nova Scotia, medical officers there have seen protests in front of their homes. Some have even faced death threats.“They are scientists, they are civil servants, they are experts, but they are surrounded by politics,” said Beland, director of the McGill Institute for the Study of Canada. “It’s a very, very tough situation when you’re really under pressure, you receive death threats, you receive insults on a regular basis. It’s tough.”

In Quebec, some commentators had felt Arruda, who kept his role as an assistant deputy minister, was too closely aligned with the government of Premier Francois Legault. The opposition parties as well as Quebec’s College of Physicians have called for the next director to be given greater independence.

Fafard said that after the pandemic, it would be wise to revisit the role across jurisdictions as part of a larger post-mortem. But it’s important not to lose sight of who is ultimately making decisions.

“The bottom line is, we have to hold our governments … accountable, not these people,” Fafard said. “Let’s keep the focus on the politicians we elect to make the choices, not unelected public servants.”

Double mask, add a filter: How to up your PPE game without breaking the bank

For his part, Strang said he’s heard criticism from some and been thanked by others.

“Whether the public is getting tired of hearing from me or not, I don’t know,” Strang told a briefing last week. “My commitment is to be here and help get Nova Scotia through this pandemic as safely as possible.”

With files from Keith Doucette in Halifax, Dean Bennett in Edmonton and Camille Bains in Vancouver.

Denial of responsibility! Yours Headline is an automatic aggregator of the all world’s media. In each content, the hyperlink to the primary source is specified. All trademarks belong to their rightful owners, all materials to their authors. If you are the owner of the content and do not want us to publish your materials, please contact us by email – [email protected]. The content will be deleted within 24 hours.
Bonnie HenrycanadaCanada. NewsCanada's public health guidancechief medical officerscovidCOVID-19covid-19 news
0
Share

Policies that pay off — ScienceDaily

A Political Scientist Warns the Democratic Party Is Off Course