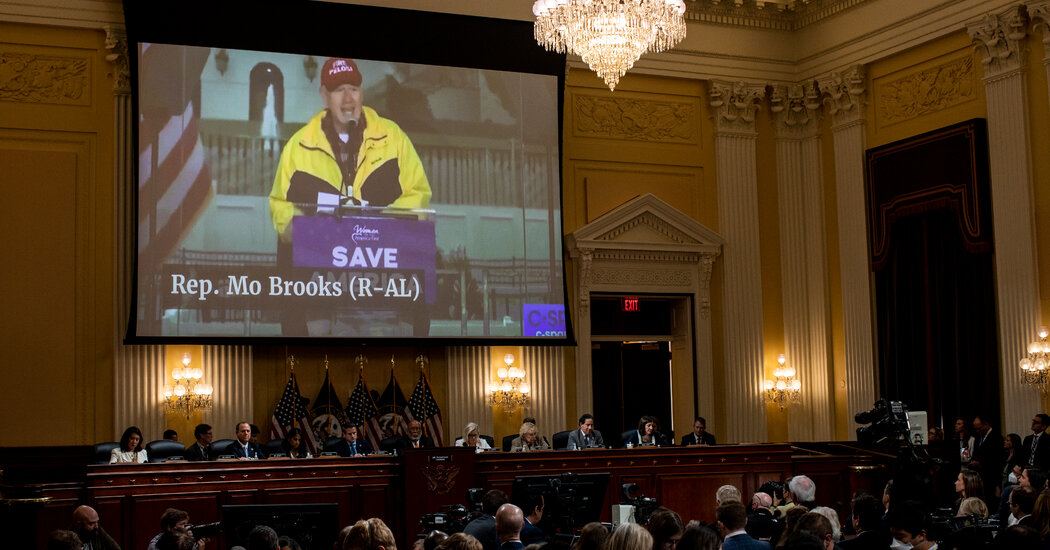 At least half a dozen Republican members of Congress sought pre-emptive pardons from President Donald J. Trump as he fought to remain in office after his defeat in the 2020 election, witnesses have told the House Jan. 6 committee, the panel disclosed on Thursday.

Mr. Trump “had hinted at a blanket pardon for the Jan. 6 thing for anybody,” Mr. Trump’s former head of presidential personnel, Johnny McEntee, testified.

Representative Matt Gaetz, Republican of Florida, appeared to ask for a broad pardon, not limited to his role in Mr. Trump’s effort to reverse the outcome of the election. Mr. Gaetz even invoked the pardoned former President Richard M. Nixon as he did so, Eric Herschmann, a White House lawyer for Mr. Trump, testified.

“He mentioned Nixon, and I said, ‘Nixon’s pardon was never nearly that broad,’” Mr. Herschmann recounted.

Representative Mo Brooks of Alabama sent an email seeking a pre-emptive pardon for all 147 members of Congress who objected to the certification of Joseph R. Biden Jr.’s Electoral College win.

She also testified that Representative Jim Jordan of Ohio “talked about” pardons but did not directly ask for one, and that she heard of newly elected Representative Marjorie Taylor Greene of Georgia also expressing interest to the White House Counsel’s Office.

Taken together, the former White House aides portrayed members of Congress concerned about potential exposure to prosecution in the wake of their support for Mr. Trump’s attempts to stay in power. And the accounts provided an extraordinary, under-penalty-of-perjury portrait of efforts to use a president’s broad clemency powers for nakedly political purposes.

Ms. Greene posted a clip of Ms. Hutchinson on Twitter and added: “Saying ‘I heard’ means you don’t know. Spreading gossip and lies is exactly what the January 6th Witch Hunt Committee is all about.” Mr. Gohmert also denied making such a request, and condemned the committee for how it has comported itself. Mr. Biggs similarly said that Ms. Hutchinson was “mistaken,” and that her testimony was edited “deceptively.”

Mr. Gaetz did not respond to a request for comment.

Mr. Brooks confirmed seeking a pardon, but said it was because he believed the Justice Department would be “abused” by the Biden administration. He released the letter he sent the White House, in which he said he was putting the request in writing at the instruction of Mr. Trump.

The fact that it had evidence that pardons were under discussion was previewed by the committee at an earlier hearing. And the panel previously revealed that a key figure in Mr. Trump’s efforts to subvert the results of the election, the conservative lawyer John Eastman, had emailed another Trump lawyer, Rudolph W. Giuliani, after the Capitol riot, asking to be “on the pardon list, if that is still in the works.”

Mr. Eastman appeared before the committee and invoked his Fifth Amendment right against self-incrimination repeatedly.

It is unclear whether Mr. Gaetz’s reported request for a blanket pardon was driven by concerns about his attempts to overturn the election or other potential criminality. At the time Mr. Gaetz made the request, he had just come under Justice Department investigation for sex-trafficking a minor. He has not been charged.

The question of who was getting pardons, and for what, was a source of enormous consternation in the final days of the Trump White House. The House select committee is using the information about the pardons to describe a broader effort to protect people who carried out Mr. Trump’s desires.

In his final weeks, Mr. Trump randomly offered pardons to former aides who were jarred because they were not sure what he thought they had done that was criminal, two former officials have said.

Key Revelations From the Jan. 6 Hearings

Among the concerns that Mr. Brooks cited was that he and other Republicans would be targeted by an incoming Justice Department, as he asked for pardons for the objectors to the certification, as well as supporters of a lawsuit Mr. Gohmert filed to pressure Vice President Mike Pence to reject Mr. Biden’s win on Jan. 6.

The White House Counsel’s Office and Mr. Herschmann argued strenuously against the pardons for members of Congress, and Mr. Trump did not grant them.

With only hours left in office, Mr. Trump issued a pardon to Stephen K. Bannon, his former White House adviser, wiping out federal charges that accused Mr. Bannon of defrauding political donors who supported building a border wall that Mr. Trump had pushed for.

In the weeks that preceded the pardon, Mr. Bannon had taken an active role in trying to keep Mr. Trump in office by promoting his claims of fraud. He also helped to devise a plan — later known as the Green Bay Sweep — to persuade members of Congress to block the normal counting of Electoral College votes by repeatedly challenging the results in various swing states.

Mr. Trump also gave pardons to his allies who were targets of the investigation into whether his campaign conspired with Russian officials in 2016. Some of them were supporters who also backed and amplified his efforts to stay in power.

One was Michael T. Flynn, the former national security adviser, who had pleaded guilty to charges of lying to the F.B.I. about his dealings with a Russian diplomat. The case was later dropped over concerns about procedural issues.

Over the weeks after his pardon around Thanksgiving in 2020, Mr. Flynn appeared at so-called Stop the Steal rallies, speaking in support of Mr. Trump’s baseless claims that the election had been stolen. Working with others like the business executive Patrick Byrne and the pro-Trump lawyer Sidney Powell, Mr. Flynn also promoted an effort to persuade Mr. Trump to use his national security apparatus to seize voting machines across the country in a bid to eventually rerun portions of the election.

In late December 2020, Mr. Trump granted a pardon to Roger J. Stone Jr., a longtime ally and informal adviser, who had been investigated in connection with the Russia inquiry and maintained his innocence. That move came five months after Mr. Trump commuted Mr. Stone’s 40-month sentence stemming from his conviction on charges of obstructing a congressional investigation into Mr. Trump’s 2016 campaign and possible ties to Russia.

Much like Mr. Flynn, Mr. Stone used social media and speaking engagements at Stop the Steal rallies to amplify and bolster Mr. Trump’s false claims about the election. Mr. Stone has adamantly denied that he had any personal role in fomenting the violence that day.