Omicron may seem mild, but we can’t ‘let it rip,’ experts say – National 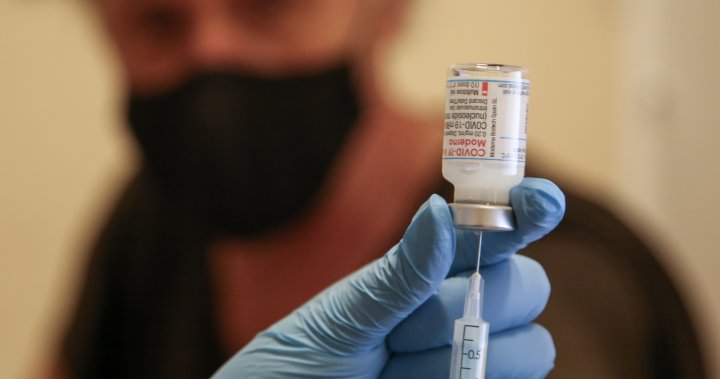 Dr. Kieran Quinn says he’s noticed a shift in attitude among his friends, colleagues and community members during the Omicron wave of COVID-19, as preventive vigilance has eroded into resignation that infection seems inevitable.

The clinician-scientist at Toronto’s Mount Sinai Hospital says he can sympathize with this sense of pandemic fatigue as the Omicron variant rages across Canada, ushering in another round of public health restrictions and backlogged demand for tests and COVID-19 vaccines.

As Omicron gains a reputation as a “mild” virus variant, Quinn says he sees why some people might feel tempted to “let it rip” in hopes of moving on from the pandemic’s latest and in some cases most overwhelming wave.

How COVID could change religion in Canada forever: ‘There is no going back’

But Quinn and other doctors say Canadians can’t afford to be so cavalier about Omicron, because while the risks of infection seem lower to some individuals, abetting the variant’s supercharged spread would have devastating consequences across society.

“We need to look beyond ourselves and protect those around us who are most vulnerable,” said Quinn. “Omicron is not going to spare those people if we throw caution to the wind and ‘let it rip.”’

Emerging evidence suggests Omicron is less likely to cause severe illness than previous COVID-19 strains, but Quinn said those relative differences still translate into absolute numbers that make the new variant’s impact on the health system anything but mild.

Britain’s public health agency released preliminary data last month that found people with the Omicron variant were between 50 to 70 per cent less likely to require hospitalization than those with the Delta strain.

But research also indicates that Omicron is several times more transmissible than its predecessors, Quinn said, adding that even if a smaller proportion of infected people need medical attention, the sheer volume of cases would overwhelm hospitals.

Hospitals in many regions have been forced to cancel or delay surgeries to free up beds for the influx of COVID-19 patients. At the same time, the virus’s spread among health workers exacerbates staffing shortages.

“The reality right now is with the pace at which Omicron is already spreading … there really is no wiggle room,” said Smart, a Whitehorse-based pediatrician.

“Trying to be purposely infected with Omicron and taking the risk that you may require medical care right now is a big gamble, as we’re really seeing our health resources stretched to the limit.”

5:20
BC modelling suggests Omicron is on the decline

BC modelling suggests Omicron is on the decline

She urged Canadians not to give way to “let it rip” complacency and resolve instead to flatten the curve by reducing social contacts, upgrading masks and booking booster doses of a COVID-19 vaccine.

“We can protect ourselves, our friends, our neighbours, our communities by doubling down again, doing the things that are within our control and really trying to stick together,” she said.

Quinn, who wrote a piece in Healthy Debate last week about the pitfalls of a “let it rip” approach, proposed that people consider how one Omicron case could ripple through their social sphere within six degrees of separation. Chances are it wouldn’t take too many links in the chain for the virus to reach someone susceptible to Omicron’s harms, he suggested.

That could mean infecting someone at higher risk of severe health outcomes from Omicron, such as older adults and individuals with compromised immune systems, said Quinn. Even a mere exposure could cost someone a paycheque if they’re unable to work while in self-isolation.

Quinn said this goes to show how vulnerable people will ultimately pay a catastrophic price if others decide to roll the dice on Omicron.

“We must not forget about the greater good,” he said.

Most individuals will also find that catching Omicron isn’t in their own best interest, said Quinn.

Omicron isn’t your typical winter bug, he said, and “mild” illness shouldn’t be confused with innocuous. There’s a wide spectrum of symptoms _ such as a cough, fever, sore throat, fatigue and body aches _ that can range in severity from imperceptible to debilitating, he said.

2:03
Growing fears some are letting their guard down against Omicron variant

Growing fears some are letting their guard down against Omicron variant

Then there’s the risk of developing long COVID-19. The World Health Organization reported last year that approximately one in four individuals who contracted the virus experienced post-COVID-19 symptoms for at least a month, and one in 10 saw the effects linger for more than 12 weeks.

While some people seem to believe that beating Omicron could be a welcome immunity boost, Dr. Louis Hugo Francescutti, a professor at University of Alberta’s School of Public Health, said the cost-to-benefit calculation of courting the variant tips firmly toward the negative.

Francescutti said it’s true that overcoming Omicron likely confers some degree of natural immunity, but that benefit would wane over time, leaving people vulnerable to COVID-19 reinfection. He added that getting vaccinated is a much safer method of building protection against the virus.

He’s also skeptical of the notion that Omicron is paving the way for COVID-19 to shift into an endemic disease, meaning it would continue to circulate sporadically but with more manageable societal impacts.

It’s too early to predict the trajectory of the virus, said Francescutti, particularly as the uneven distribution of vaccines across the globe creates concerns about the emergence of new variants.

But he believes the rise in “let it rip” sentiment shows how Canada’s piecemeal and inconsistent COVID-19 strategy has left the public confused about the threat Omicron poses.

Francescutti said government officials seem to have thrown up their hands when they should have been redoubling their efforts to contain the highly contagious variant, neglecting to take necessary measures to shore up the health-care system, expand testing and contact tracing capacity and combat vaccine hesitancy.

“It’s a pretty dire situation, and any politician or public health official that pretends everything’s under control is doing exactly that _ they’re pretending,” he said.

“You think we’d be more vigilant, but instead we’re looking the other way … and going, ‘Que sera, sera.’ And now’s not the time to be singing that song.”

–With files from The Associated Press

This report by The Canadian Press was first published Jan. 16, 2022.

Denial of responsibility! Yours Headline is an automatic aggregator of the all world’s media. In each content, the hyperlink to the primary source is specified. All trademarks belong to their rightful owners, all materials to their authors. If you are the owner of the content and do not want us to publish your materials, please contact us by email – [email protected]. The content will be deleted within 24 hours.
canadaCanada COVID-19Canada health COVID-19Canada OmicronCOVID-19COVID-19 pandemic fatiguecovid-19 vaccinesHealth
0
Share

The third wave of corona will come to Maharashtra in December, a serious warning from…