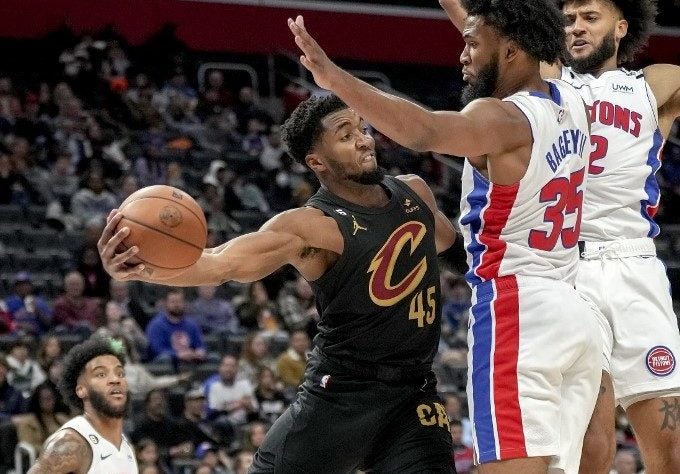 Donovan Mitchell #45 of the Cleveland Cavaliers passes the ball against Marvin Bagley III #35 and Isaiah Livers #12 of the Detroit Pistons during the second quarter at Little Caesars Arena on November 27, 2022 in Detroit, Michigan. Nic Antaya/Getty Images/AFP

Donovan Mitchell poured in 32 points to lead the visiting Cleveland Cavaliers past the depleted Detroit Pistons 102-94 on Sunday night.

Evan Mobley had 20 points and grabbed 13 rebounds while Darius Garland supplied 19 points and 10 assists for the Cavaliers, who have won five of their last six games. Cedi Osman added 10 points off the bench.

Detroit had four starters sidelined. Bojan Bogdanovic and Jaden Ivy sat out with knee soreness, Isaiah Stewart was sidelined by a toe injury and Cade Cunningham remained in street clothes due to a shin ailment.

Saddiq Bey, the team’s other starter, scored 15 points after missing the previous four games due to an ankle injury.

🕷 @spidadmitchell in the @cavs comeback win!

The Pistons never trailed by more than a point in the opening half, which ended with Detroit up 56-51.

Hayes made a layup midway through the third quarter to give his team a 65-60 lead.

Burks hit from the elbow in the final minute of the quarter for a 77-71 lead. The Pistons were clinging to a five-point advantage, 78-73, when the quarter ended.

The Cavs chipped away and eventually took the lead on a Mitchell 3-pointer with 7:45 left. Mobley knocked down a 3-pointer from the top of the key to give Cleveland a 93-90 edge.

Hayes scored in the lane but Mitchell drilled a 3-pointer to make it 97-92. Mitchell increased the lead to seven with two free throws.

Garland followed with two free throws to clinch the win.

Past Discrimination Tied to Worse Recovery After Heart Attack