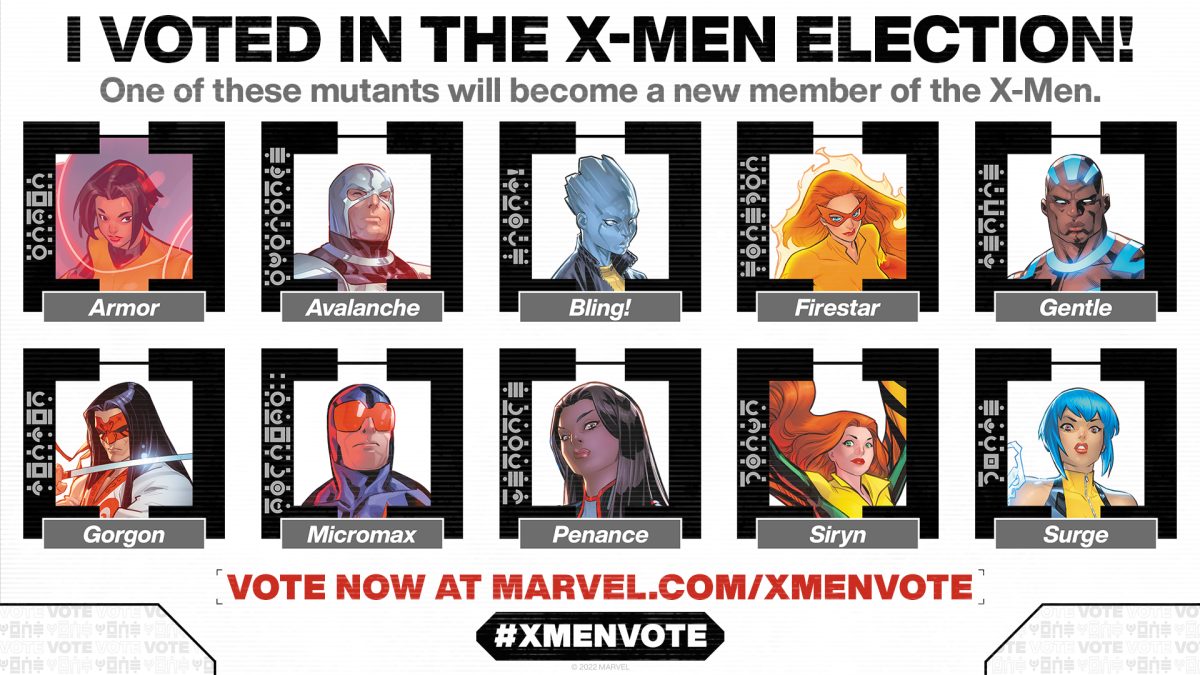 Last year Marvel Comics hosted a fan vote to decide who would become a member of their new X-Men team. The results were formally announced as part of the X-Men line’s Hellfire Gala storyline, which spanned all 137 X-Men titles during the month of June. Today the publisher announced their “second annual X-Men election,” which begins today with ten more mutants up for membership on the team, as well as another Hellfire Gala to be held later this year.

The lineup of mutants up for joining the X-Men include one returning nominee from last year, Armor, and one sibling of a previous nominee, Siryn. Other nominees represent a range of characters from across Krakoa, including Avalanche, Bling!, Firestar, Gentle, Gorgon, Micromax, Penance, and Surge.

As with last year’s vote, Marvel Insider members will also be eligible to enter a contest to be drawn into the Hellfire Gala. Entry into that drawing will be open beginning next Tuesday, January 18th, and will run until the following Wednesday, January 26th.

It’s kind of surprising to see Marvel returning to this well again so soon after the last vote and Hellfire Gala. The publisher for months promoted the hell(fire) out of last year’s Gala, with reveals of new character fashion designs by Russell Dauterman, dozens of variant covers, and celebrity cameos in the pages of the storyline. Doing the same thing two years in a row feels like a bad sign, honestly. Former Head of X Jonathan Hickman‘s last issue for the line just came out this past week and already the line is repeating itself.  It’s well-known that the crew of X-writers opted to extend the first ‘act’ of the Krakoan status quo rather than take it forward into its next phase; hopefully this isn’t an indication that that extension just means we’re going to get more of the same over and over again. That’s a pretty solid way to kill enthusiasm for a line.

The X-Men Vote is open now, and will remain open through Thursday, January 13th.