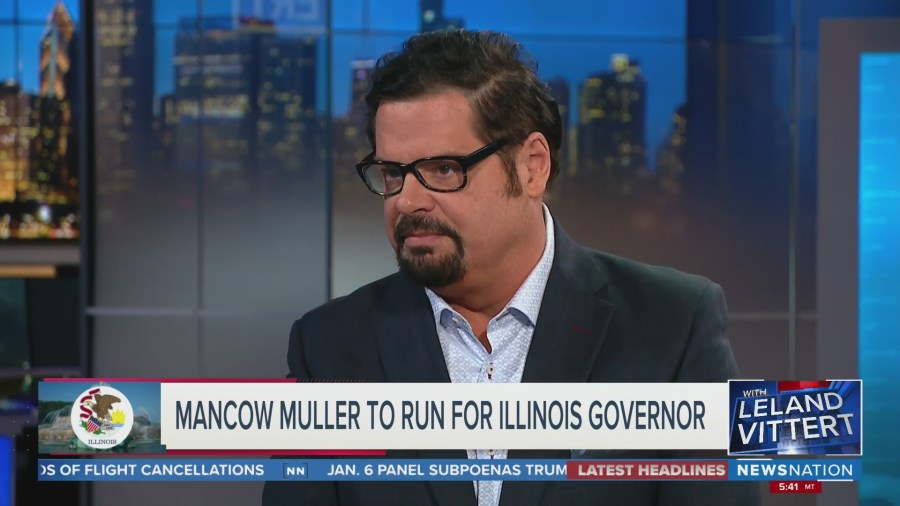 (NewsNation Now) — Erich “Mancow” Muller will run for Illinois governor this fall as an independent, the radio host announced on NewsNation’s “On Balance with Leland Vittert” show Wednesday.

“I am serious,” Muller said on “On Balance.” “I’ve decided I want to be the captain of the Titanic.”

Muller has hosted shows across the country, including in San Francisco, Kansas City and most recently Chicago. He has also appeared frequently as a guest of “On Balance,” discussing free speech issues and other political topics.

He does not have any political experience.

Illinois Gov. JB Pritzker (D) was also a political outsider when he defeated Former Gov. Bruce Rauner in 2018. Pritzker’s campaign ads so far have focused on his handling of the COVID-19 pandemic and improving the state’s dismal credit rating.

Pritzker has been criticized for doubling the state’s gas tax, which had been stagnant for decades. He also presided over the end of a decade that saw further outmigration — the state lost a seat in Congress after the most recent census. Republicans also griped about his COVID-19 policies, including capacity limits on businesses persisting into 2021.

“What I want to do is leave people alone,” Muller said. “I want to roll back gas taxes and cut those in half.”

Muller is a controversial figure, and has voiced support for conspiracy theories such as “false flag” operations, and questioned the authenticity of former President Barack Obama’s birth certificate. He’s also appeared on Alex Jones’ controversial Infowars program and accused Democrats of running “Mao’s playbook” to “take the guns.” He has upset some in Chicago for his comments about the city’s safety and schools.

During his appearance, Muller defended crass comments he’s made about Oprah Winfrey’s weight and the possibility of his comments being used against him by saying, “The commies are good at the propaganda. As far as skeletons in my closet, I’ve got a graveyard, I get it. I have a huge audience — I assume they still like me, they spent many years with me.”

The Republican field is crowded without a clear front-runner. Pritzker is the only candidate from any party who has held statewide office.

Rep. Adam Kinzinger (R-Ill.) had considered a run for governor after redistricting pitted him against another Republican to take his seat, but recently said he would not seek statewide office.

Not sure how to find us? Here’s how to watch NewsNation on TV and online.

If Boris Johnson is forced out, who might replace him? | Conservatives

Conservatives Are Banning Books From Schools While Whining About ‘Cancel…

U.S. Blocks $130 Million in Aid for Egypt Over Rights Abuses