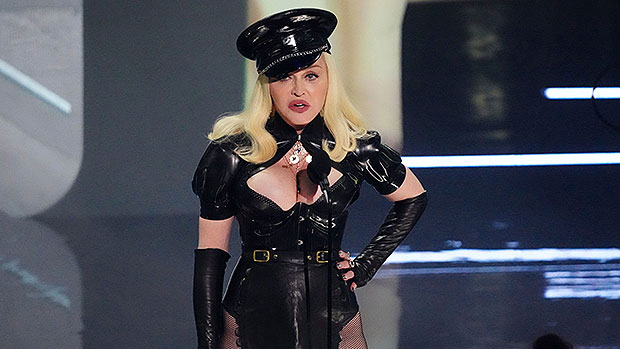 Madonna is still a provocateur extraordinaire! The “Vogue” singer, 63, took to social media to model a seductive gothic ensemble — complete with leather, chains, bodice chokers, and super sexy stockings! “Justify My Love…..,…,.” the singer captioned the video, alongside emojis of pride flags and colorful hearts. The caption referenced her controversial, sexually-charged song, music video, and documentary from 1990, and honored Pride Month.

The video, posted to Instagram June 23, showed Madonna on her knees with heavy black combat boots on her hands, stomping them into the floor. She then showed off her entire bondage-inspired ensemble while walking down a blue hallway — and it’s everything you hoped it would be! The “True Blue” singer rocked a spiked collar, thumbhole mesh sleeves, layered choker-style necklaces, silver hoop earrings, and a heavily embellished leather corset. She wore her hair long and finished the look with signature fishnet tights and the combat boots — this time, on her feet.

Madonna’s loyal fan base of 18.3M followers properly worshipped her with comments befitting her status as pop royalty. “My queen,” reacted one follower, while another stated, “The Queen is here to slay PRIDE NIGHT!” “MADONNA IS THE MOST CREATIVE ARTIST EVER. MALE OR FEMALE. SHE’S UNREAL,” wrote one follower.

Some comments noted the singer’s ageless appeal. “Madonna never gets old,” reacted one fan. “You’re gorgeous.” “The sexiest woman of all time,” commented another alongside a flame emoji. “Madonnaaaaaa.”

The gay icon is reportedly set to perform in Hell’s Kitchen in New York City, alongside several drag queens, to kick off Pride 2022. The New York Post reported that she would perform Thursday evening (June 23) at Terminal 5. On Wednesday, the singer teased the show via Instagram stories. Thursday afternoon, she again took to Instagram stories to post a picture of a stage with a Pride flag, seemingly confirming the surprise performance!

Julia Garner: 5 Things About The Actress Who Was Offered The Role Of Madonna In Biopic

Madonna’s latest display comes after she reunited with Britney Spears at the pop princess’s June 9 wedding to re-create the famous 2003 Video Music Awards onstage kiss. She took to her own Instagram to post a pic of the re-kiss and congratulate Brit and Sam Asghari. “Britney you look so happy and in love,” Madonna captioned the June 10 post. “I wish you and Sam all the best! Last night was fun and sweaty!!”

5 Subtle Signs That Your Crush Really Likes You Back

Want to become a better gamer? EPOS explains the science behind BrainAdapt technology…