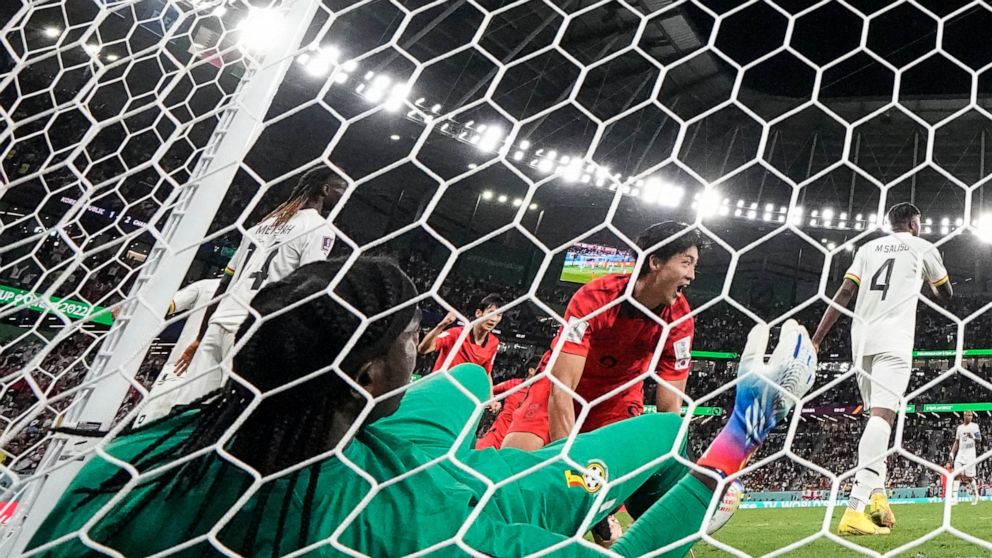 AL RAYYAN, Qatar — Mohammed Kudus scored twice, including the go-ahead goal after South Korea evened the match in the second half, and Ghana staved off elimination at the World Cup with a 3-2 victory on Monday.

Mohammed Salisu also scored for the Black Stars, who lost their opening match against Portugal and were in need of points for a chance to reach the knockout round in Qatar.

Down 2-0, Cho Geu-sung scored both of South Korea’s goals about three minutes apart early in the second half to even the game at 2-2.

But Kudus’ low left-footed goal in the 68th minute sailed out of the reach of goalkeeper Kim Seung-gyu to give the Black Stars back the lead. Goalkeeper Lawrence Ati-Zigi preserved the victory with a leaping save off Cho’s attempt in stoppage time.

South Korea forward Son Heung-min remained without a goal in Qatar. The Tottenham forward wore a mask to protect a broken left eye socket he sustained in a Champions League game against Marseille earlier this month.

South Korea coach Paulo Bento was handed a red card in the moments following the match after a heated exchange with English referee Anthony Taylor. The Portuguese coach was furious when South Korea won a corner at the end of 10 minutes of stoppage time, but the whistle was blown before it could be taken.

The red card means that Bento will not be on the sideline for South Korea’s final match against Portugal on Friday.

Assistant coach Sergio Costa said “the result at the end was totally unfair” and added that he did not hear Bento say anything “inappropriate.”

Ghana scored a pair of goals in a strong performance in the opener but fell in the end to their Cristiano Ronaldo-led opponents 3-2. South Korea played to a 0-0 draw in its opener with Uruguay. The team was making its sixth straight World Cup appearance.

Ghana became the third African nation to make it to the World Cup quarterfinals at the 2010 tournament. Black Stars captain Andre Ayew was also on that squad. No African team has reached the World Cup semifinals.

Known for its controlled possession, South Korea dominated the first 20 minutes. Ghana broke through in the 24th when Salisu scored in a scramble in front of the net off a free kick. After a spirited celebration encircled by his teammates, Salisu nervously crouched on the field while the goal was confirmed by video review.

Kudus, a 22-year-old midfielder for Ajax, doubled the lead with a header off a long cross from Jordan Ayew, despite the desperate efforts of defender Kim Jin-su.

Cho did a knee slide in front of South Korea’s bench and was dogpiled by his teammates after his first goal in the 58th minute. His second came in the 61st.

Ghana wraps up Group H on Friday against Uruguay, while the South Koreans play Portugal.

Denial of responsibility! Yours Headline is an automatic aggregator of the all world’s media. In each content, the hyperlink to the primary source is specified. All trademarks belong to their rightful owners, all materials to their authors. If you are the owner of the content and do not want us to publish your materials, please contact us by email – [email protected]. The content will be deleted within 24 hours.
2022 FIFA World Cupfifa world cupGhana National Soccer TeamInternational soccerMen's soccerMen's sportsMiddle EastPortugal National Soccer Team
0
Share

Ready for the Las Vegas A’s? Relocation speculations heat up

Connor McDavid continuing to raise the bar: ‘We need to talk about it more’