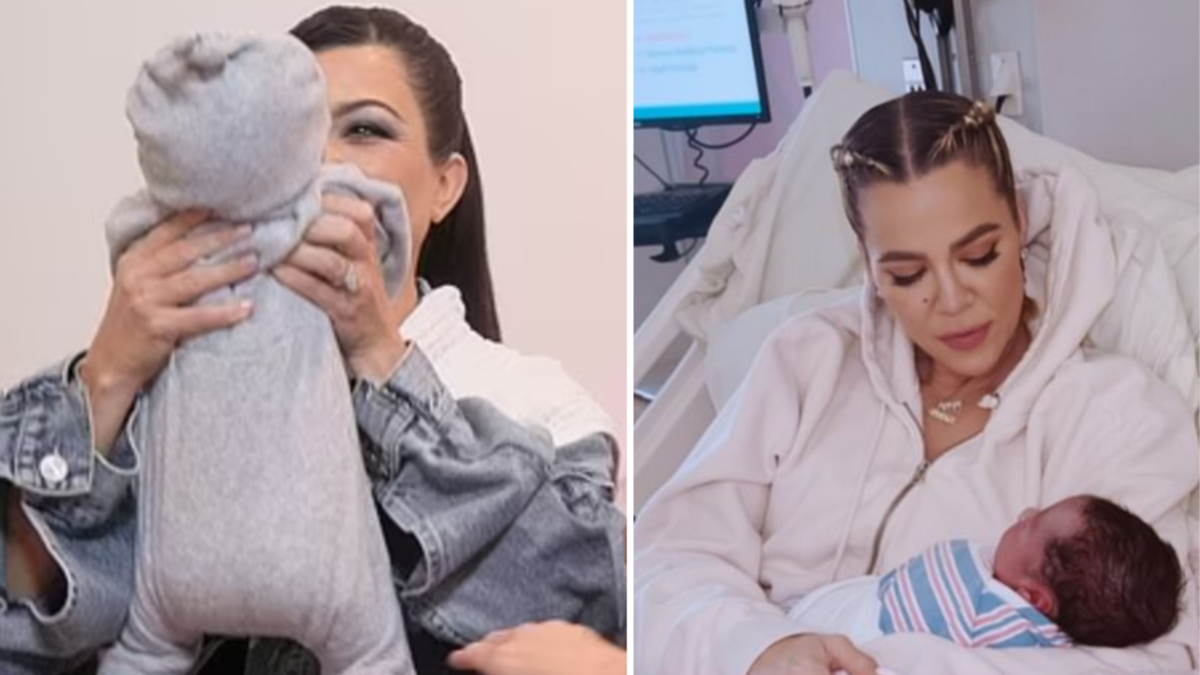 Kourtney Kardashian has expressed her desire to breastfeed her baby nephew after meeting Khloe Kardashian’s son for the first time.

Kourtney, who already has three children with ex-boyfriend Scott Disick, shared her “wish” while surrounded by her sisters and mother.

“When they open their mouths and just the way they smell,” Kourtney said on the latest episode of The Kardashians, meeting Khloe’s still-unnamed baby.

“I wish I could breastfeed you,” she said.

Although fans were hoping to learn the baby’s name and catch a glimpse of his face, they were sorely disappointed.

Speaking on the name, Kris joked “How about Rob?” in reference to Khloe’s brother and late father, both called Robert.

The baby boy, Khloe’s second child with ex Tristan Thompson, was born in July via surrogate.

They also have a daughter, True, aged four.

The only hint Khloe has given on the baby’s name – in an earlier episode of The Kardashians – is that it “starts with a T”.

“I mean, that’s really the only names I’ve been looking at,” she said on the Hulu series.

The 38-year-old has previously said she “loves everything (about being a mother of two)“ and believes her children “challenge” her as a person.

“Being able to shape little people into really incredible big people is an honour and a gift,” she told Elle in August.

“We have to take those roles seriously, especially in today’s day and age, with how much accessibility children have and the information they’re exposed to so young.

“It’s super scary, but I take my job very seriously. I love it so much.”

She documented the process of IVF and fertility assistance on the hit reality show, Keeping Up with the Kardashians, before deciding to use a surrogate.

In July, Khloe and Tristan confirmed they were expecting a son, seven months after their latest breakup.

The pregnancy was kept under wraps, with a source close to Kardashian saying she hadn’t even told everyone in her inner circle when the news leaked on TMZ.

The source told E! News that Kardashian kept the pregnancy a secret “to protect surrogate privacy and safety and to protect her mental health from judgement from the public as a result of Thompson’s actions”.

The former flames have had a tumultuous relationship, but Kardashian said she is committed to co-parenting with the basketball star.

Throughout their time together, Thompson has been involved in cheating scandals.

In January, he confirmed he had fathered a son with fitness model Maralee Nichols.

Kim Kardashian noted the scandal on an episode of the family’s hit reality show, saying: “The whole thing that’s so sad is that (Khloe) wants a baby boy. Now this girl is having a f****** baby boy? A f****** random that he sleeps with one night? F*** him!”

Other members of the family have slammed Thompson’s “never-ending betrayal”, calling him “the worst person on the planet”.

Khloe Kardashian told Good Morning America their son was conceived in November 2021, prior to knowing about Thompson’s latest transgression.

A source told People the mum-of-two wanted Thompson “as involved as possible” with the raising of the new baby.

“Just like they do with True, Khloe will co-parent the baby with Tristan,” the insider said.

“Tristan is the dad and Khloe wants him involved as much as possible. He is great with True.”

The source added that, although not being together, Kardashian “doesn’t see herself as a single mum”.

Denial of responsibility! Yours Headline is an automatic aggregator of the all world’s media. In each content, the hyperlink to the primary source is specified. All trademarks belong to their rightful owners, all materials to their authors. If you are the owner of the content and do not want us to publish your materials, please contact us by email – [email protected]. The content will be deleted within 24 hours.
CelebrityEntertainmentkhloe kardashianKourtney Kardashian
0
Share