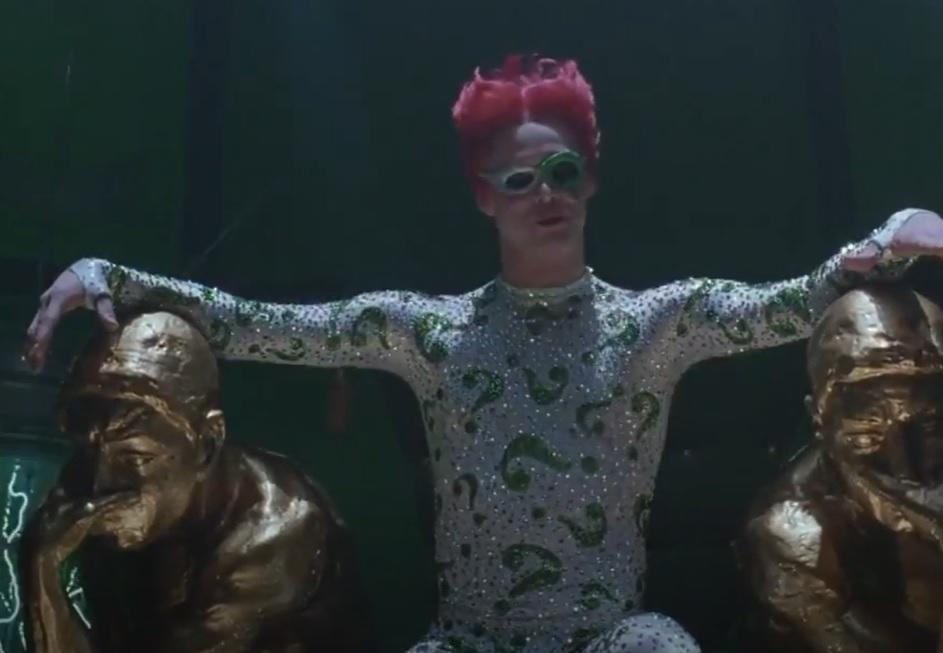 The multiverse is a fun place sometimes, and the wildly disparate takes on DC and Marvel characters can make for some pretty entertaining crossover. Case in point: comedian Matthew Highton recently created modified the trailer for The Batman to include Jim Carrey’s The Riddler from Batman Forever. That film, which was released in 1995, featured Carrey’s Riddler teaming up with Tommy Lee Jones’s Two-Face to square off with Val Kilmer’s Batman. The Batman will be the first big-screen appearance of The Riddler since, this time played by Paul Dano, who will face Robert Pattinson’s Batman.

Highton’s Twitter feed is full of fun little projects like this. The most recent sees him replace the spoon from The Matrix‘s “there is no spoon” scene with Forky from Toy Story 4.

You can see the The Batman trailer below.

Batman Forever has been surprisingly in the headlines quite a bit over the course of the last year; its director, Hollywood icon Joel Schumacher, passed away in June of 2020, and shortly thereafter, rumors started to circulate that Warner Bros. had in its possession a “director’s cut” of Batman Forever, which was longer, and darker in tone. Some fans have advocated for an HBO Max release for the movie. Recently, a fan put together a movie poster for The Batman based on the poster design for Batman Forever.

Two years of stalking the streets as the Batman (Robert Pattinson), striking fear into the hearts of criminals, has led Bruce Wayne deep into the shadows of Gotham City. With only a few trusted allies — Alfred Pennyworth (Andy Serkis), Lt. James Gordon (Jeffrey Wright) — amongst the city’s corrupt network of officials and high-profile figures, the lone vigilante has established himself as the sole embodiment of vengeance amongst his fellow citizens.

Starring alongside Pattinson (Tenet, The Lighthouse) as Gotham’s famous and infamous cast of characters are Zoë Kravitz (Big Little Lies, Fantastic Beasts: The Crimes of Grindelwald) as Selina Kyle; Paul Dano (Love & Mercy, 12 Years a Slave) as Edward Nashton; Jeffrey Wright (No Time to Die, Westworld) as the GCPD’s James Gordon; John Turturro (the Transformers films, The Plot Against America) as Carmine Falcone; Peter Sarsgaard (The Magnificent Seven, Interrogation) as Gotham D.A. Gil Colson; Jayme Lawson (Farewell Amor) as mayoral candidate Bella Reál; with Andy Serkis (the Planet of the Apes films, Black Panther) as Alfred; and Colin Farrell (The Gentlemen, Fantastic Beasts and Where to Find Them) as Oswald Cobblepot.

You can check out Highton’s latest comedy special here.

Denial of responsibility! Yours Headline is an automatic aggregator of the all world’s media. In each content, the hyperlink to the primary source is specified. All trademarks belong to their rightful owners, all materials to their authors. If you are the owner of the content and do not want us to publish your materials, please contact us by email – [email protected]. The content will be deleted within 24 hours.
Batman ForeverDC FilmsJim CarreymoviesThe Batman
0
Share

In Southern Africa, Success Against H.I.V. Offers Hope for Beating Back Another Virus

Live-Action The Aristocats Remake in the Works at Disney