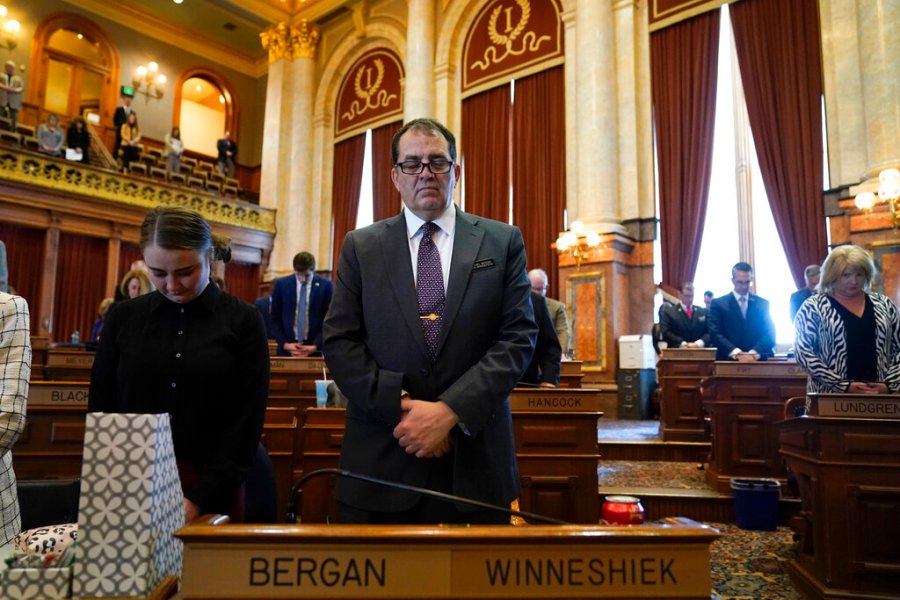 DES MOINES, Iowa (AP) — Iowa’s Senate president opened the legislative session Monday with an attack on the media and claims of a “sinister agenda” to normalize deviant behavior against children.

The Legislature is expected to focus on plans for tax cuts and reforms to unemployment law, but Republican Senate President Jake Chapman used his opening speech to challenge lawmakers to take a stand.

“It has become increasingly evident that we live in a world in which many, including our media, wish to confuse, misguide and deceive us, calling good evil and evil good,” he said.

He followed with a claim that there is a “sinister agenda occurring right before our eyes.”

“The attack on our children is no longer hidden,” he said. “Those who wish to normalize sexually deviant behavior against our children, including pedophilia and incest, are pushing this movement more than ever before.”

Chapman has earlier called for jailing educators who provide what he considers obscene material to children, and he supports banning some books from schools. There has been a move in Iowa and across the country to increase control over what books are available to children, and Chapman made clear those efforts would be a priority during the legislative session, saying “some teachers are disguising sexually obscene material as desired subject matter and profess it has artistic and literary value.”

“Nobody, regardless of their race, religion, ethnicity, gender, sexual orientation or occupation has the right to expose children to obscene material,” Chapman said.

Chapman did not respond to a message from The Associated Press seeking further clarification of his comments.

Democratic leaders criticized Chapman’s remarks, calling the comments divisive and extreme political rhetoric that has made teachers, nurses and other people hesitant to work in the state.

Senate Democratic Leader Zach Wahls said Iowa’s labor shortage is worse than elsewhere because of Republicans’ legislative agenda. The GOP is in its sixth year controlling both legislative chambers.

“We’ve been told it will be more of the GOP greatest hits this session: more attacks on LGBTQ Iowans, more gasoline on the culture war fire and more attacks on the First Amendment,” Wahls said.

Wahls also noted that Senate Republicans barred reporters from the floor of the Senate chamber for the first time in more than a century. The decision has forced reporters to work from a public gallery above the chamber where access to elected officials is severely restricted.

“We believe Iowa needs to end the divisive culture wars that pit Iowans against Iowans, and instead bring our state together,” he said. “We need to make Iowa an inclusive and welcoming place to get our state growing again.”

“It’s become increasingly clear we can no longer ignore the lies and misinformation so pervasive today. As elected officials, we have a deep responsibility to not just tell the truth, but defend the truth and hold each other accountable,” she said. “Our democracy needs us to uphold the truth so it can endure.”

Other Republican leaders talked of approving tax cuts, rewriting unemployment laws to push people back to work and creating a parents bill of rights that could determine how schools decide which books are appropriate for libraries.

The 150 lawmakers and staff returned to the Capitol with no mask, vaccine or test requirements as COVID-19 continues its rapid spread throughout the state.

Lawmakers could decide how to deal with potential federal vaccine mandates, which now are tied up in the courts. A group of people opposed to vaccine requirements rallied inside the Capitol on Monday morning before lawmakers began the session.

Republican Gov. Kim Reynolds will deliver her Condition of the State address on Tuesday evening, outlining her budget and policy priorities for the year.

Joe Biden and Peter Doocy Is the Rivalry Everyone Can Love