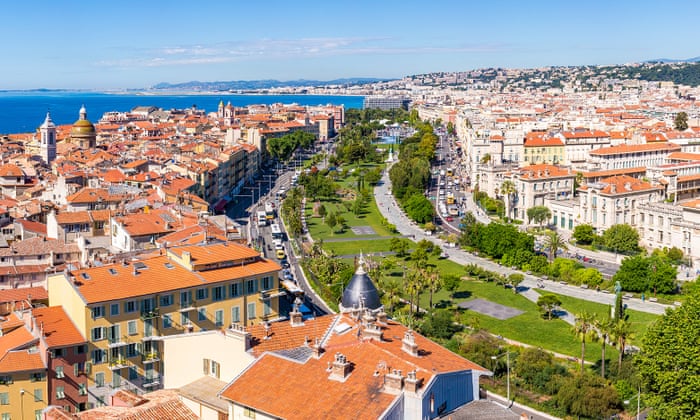 We’re a nation obsessed with weather, so it’s no wonder our aristocrats have long wintered in Nice. Now recognised by Unesco as the winter resort town of the Riveria, its coastline averages 300 days of sun a year. Today, this Mediterranean city is just a four-minute train ride from the airport and your gateway to the famous crystal waters of the Côte d’Azur. Here’s how to make the most of an off-season week in and around one of France’s most glamorous cities …

Day one: perambulate on promenade

For immediate de-stressing when you land, stay at the boutique hotel Sonder at Yelo Jean Médecin in Centre Ville. It’s a few minutes’ walk from the station and its chic, airy rooms come at bohemian prices. From there, take in the sea views Queen Victoria fell in love with walking the Promenade des Anglais, before heading to L’epicerie Georges for a bite and a glass of wine. With a belly full of fromage, wander towards the Cathédrale Sainte-Réparate – a baroque architectural gem honouring the city’s patron saint – before getting lost in the labyrinthine lanes of Vieux Nice. The layout has barely changed since the 1700s, and is packed with boutiques and bars. Don’t forget to Instagram from the top of Colline du Château.

Rise early to take in the sights, sounds and scents of the Cours Saleya; this massive market square teeming with food and flowers is ideal for sourcing culinary souvenirs. Then head to Nice’s nicest beach, La Réserve, and drink cocktails at Le Plongeoir – a gourmet restaurant overlooking the sea with three diving boards from which local daredevils used to plunge. This has been a must-book destination since la belle époque, when guests would drink tea here on a fishing boat secured to the rock, six metres above the waves. Finish the day by delving into the past, touring the Grotte du Lazaret, which was home to prehistoric humans.

Since the sun is shining, you may want a sandy beach to soak it up on. Villefranche-sur-Mer is a 20-minute bus ride away – or a half-hour cycle along the Boulevard Carnot. The sand strip at Plage de la Marinière is quite narrow, so don’t forget your flipflops. Check in for the night at the Hôtel La Fiancée du Pirate before spending the evening hanging out in the atmospheric old harbour, La Darse, eating, drinking and imagining what it would be like to marry a pirate.

Travel a little farther down the coast to the fishing village of Saint-Jean-Cap-Ferrat to spend the day scuba diving and snorkelling at the Cap Ferrat diving centre. Their experts can help you discover more than 20 beauty spots along the peninsula, where you can get acquainted with crystal-clear waters and seagrass meadows, as starfish, sea urchins, girelles, sea anemones, and other cnidarians swim alongside you. After a spot of lunch, immerse yourself in a completely different world of wonders at Baroness Ephrussi de Rothschild’s priceless Renaissance-style villa and gardens, which is unrivalled on the Riviera for its sheer scale and opulence.

The medieval hilltop village of Èze is one of the most beautiful places in the Mediterranean. Built 400 metres above sea level, it is most famous for its panoramic views. Walt Disney spent a significant amount of time here learning a thing or two about how to craft a fairytale while staying at the Château de la Chèvre d’Or. The Jardin Botanique d’Èze is a must-see for its collection of cacti and succulents, while the Fragonard perfume factory laboratory is a must-sniff for its heavenly scents. If you intend to treat yourself to a memory-making meal on your trip, Èze is the place to book in. The village is a fine-dining haven – home to the two-Michelin-starred La Chèvre d’Or and the stunning elevated terrace restaurant at Château Eza. The only hard choice will be deciding which to opt for.

If you’re visiting during ski season, it’s well worth driving north to appreciate the Alps in all their snowy glory. If not, head out of town and stop just before you reach Monaco at Cap-d’Ail. This famous hiking trail is modern for the Med, but full of flora and fauna from Mala beach in the west to Marquet beach on the east. Along the way there is a seemingly endless array of belle époque villas with exquisite gardens – Hollywood legend Greta Garbo lived here when she wanted to be alone, while Winston Churchill was honorary mayor and has an avenue named after him. Below, there are cliffs of volcanic rock and more sparkling blue waters.

Day seven: art of the Riviera

Any stay in Nice Côte d’Azur will seem too short if you’re flying back to the pale, grey skies of old Blighty. To make the trip home as painless as possible, take the train back to Nice and spend your final 24 hours admiring the work of great artists inspired by the region. You’ll find museums devoted to Matisse (in love with the “limpidity” of Nice), Chagall (who was obsessed with the shores of the Mediterranean) and Renoir (who spent his last, prolific 12 years here). Complete the holiday with a viewing of the Masséna Museum, the architectural jewel of the Promenade des Anglais, which evokes the whole history of the Riviera – and embodies why it is so difficult to leave.

Discover a new side to the south of France with an off-season trip to Nice Côte d’Azur. With EasyJet flights from various UK airports, it’s never been easier to catch some autumn/winter sun. Find out more at easyjet.com and explorenicecotedazur.com

The voyage is the main event: five fantastic no-fly adventures in Europe | Green…

How to cycle to Iceland, part one: pedalling through Denmark | Denmark holidays