How the Voting Rights Bills Miss the Target on Election Subversion 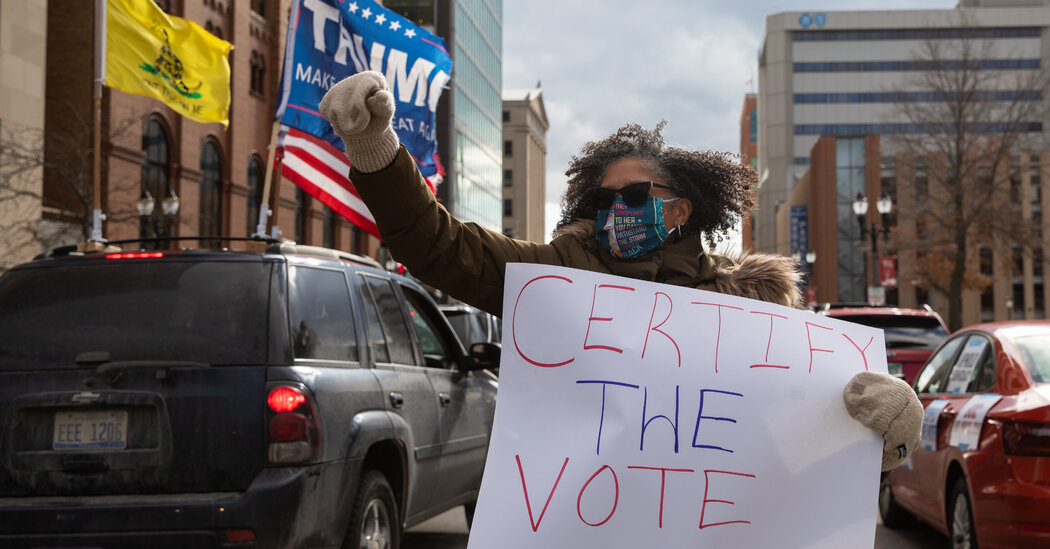 More than a year after the attack on the Capitol, President Biden and congressional Democrats still seem nowhere close to enacting robust safeguards against another attempt to overturn a presidential election.

One reason is obvious: There’s not enough support in the Senate for Democrats to enact the two voting rights proposals that Mr. Biden pushed in his speech in Atlanta on Tuesday.

But there’s another less obvious reason: Neither of the voting rights bills, nor the emerging bipartisan effort to reform the Electoral Count Act, are sure to close off some of the most probable avenues for election subversion.

While the various legislative paths might protect access to voting or hold the promise of clarifying how Congress counts electoral votes, the proposals are largely silent on a crucial time frame — the period between the polls closing in November to January, when Congress gathers to count electoral votes. This is when election administrators go about the once routine business of counting and certifying election results.

Many analysts believe the electoral process may be at its most vulnerable during this period, when the actions of even a handful of officials could precipitate a constitutional crisis. The risks were evident after the last election, when former President Donald J. Trump and his allies relentlessly sought to persuade election officials to refuse to certify results or invalidate ballots. Virtually no election administrators joined Mr. Trump’s effort. A friendlier voice might answer the phone the next time a president calls a secretary of state in search of another 11,000 votes.

Yet the arcane workings of tabulating and certifying the vote have received less attention, whether in legislative proposals or in the news media, than the spectacle of violence at the Capitol or the wave of new Republican laws to restrict voting access.

The two legislative paths — the Freedom to Vote Act and the John Lewis Voting Rights Advancement Act — that the president promoted on Tuesday do offer at least some protection against election subversion.

The Freedom to Vote Act has evolved considerably since the summer, when its predecessor contained almost no provisions to address the issue. Now it attempts to respond to the numerous Republican election laws that target election workers and nonpartisan election officials, while including other provisions that indirectly protect the process of counting votes — including paper ballot and chain of custody requirements, and safeguards against discarding mail ballots because of a missing security envelope or inexact signature match.

But the proposed laws do not regulate the process of certifying the vote — the focal point for Mr. Trump and his allies as they tried to overturn the last election. While their attempt ended in failure, some of their efforts came close enough to represent a credible path for future election subversion.

The certification of elections by local election administrators is one example.

In Wayne County, Mich., which includes the overwhelmingly Democratic and majority Black city of Detroit, two Republicans initially blocked certification in 2020 before quickly reversing themselves. And one of the two Republican members of a statewide Michigan board refused to certify the results. If the other Republican on the board had done the same, Michigan would have failed to certify — and it is not clear what would have happened as a result.

Today, Republicans who believe the 2020 presidential election was stolen are poised to assume greater power across the country, from sitting on local election boards to winning or running for secretary of state positions. With Republican voters remaining loyal to Mr. Trump, many G.O.P. officials might have a very different understanding of what is expected of them by the voters than they did heading into the last election.

Similarly, the Democratic voting rights bills would do little to guard against the other paths that Mr. Trump pursued to invalidate the 2020 election, such as pressuring the vice president and congressional Republicans to ignore or overturn Electoral College delegates, or pressuring state legislatures to ignore the certified election result and appoint Trump electors.

The Freedom to Vote Act’s anti-gerrymandering provisions have been construed as offering indirect protection against a congressional effort to overturn a presidential election, on the assumption that it would reduce the likelihood of Republican control of Congress.

But even that provision seems to be of waning utility, as Democrats appear poised to gerrymander enough Democratic-leaning seats in New York, Illinois and other states so as to ensure a relatively fair national fight for control of Congress. And the proposal does not include a ban on state legislative gerrymandering, a tactic Republicans have sometimes used in states like Wisconsin, Georgia or Texas to create such lopsided majorities that it’s plausible to imagine how there might be enough support to overturn a closely contested election.

In contrast to the Democratic voting rights bills, an attempt to reform the Electoral Count Act — the 1887 law that established the procedures for counting electoral votes — might be more likely to more directly address the risk of an intentional campaign to reverse the result of a certified election in Congress.

Over the last few weeks, a variety of lawmakers from both parties in the House and Senate have been mulling possible fixes to the law. Senator Mitch McConnell, Republican of Kentucky and the minority leader, signaled openness to revising the act, though many progressives see the push as part of an attempt to derail their own voting rights initiatives.

These talks are still in their infancy, so it is still too early to evaluate what a final version would or would not accomplish.

At a minimum, reforming the Electoral Count Act would likely clarify the role of the vice president in counting electoral votes and make it more challenging to overturn lawful electoral slates, while presumably preserving a path for Congress to overturn an unlawful slate of electors. But it would not protect access to voting or curb gerrymandering, like the Democratic proposals. It might not safeguard the process of tabulating and certifying the results, either, at least not until Congress gathers to count the electoral votes.

And while the violence at the Capitol made the process of counting electoral votes seem like the most vulnerable part of election certification, it may not be the likeliest path to election subversion. It could just as easily be the likeliest way to stop it. Kamala Harris, not Mike Pence or another Trump ally, will be the vice president in 2024. There are at least a dozen Senate Republicans — and perhaps many more — who appear very unlikely to acquiesce to a brazen push to overturn a legitimate electoral slate. Not even Mr. McConnell seems likely to go along with it.

A more serious subversion threat might emerge earlier in the process, if state officials invalidated or overturned the result of a free and fair election without violating state laws, perhaps by refusing to certify a result and send a single slate of electors to Congress. The burden on Congress would be flipped around: Democracy would now depend on whether Congress would intervene and overturn electoral slate. Without simultaneously safeguarding the process of tabulating and certifying votes, making it more difficult to overturn a legitimate electoral slate might risk making it too hard for Congress to overturn a subverted one.

It is possible that an eventual proposal to reform the Electoral Count Act might succeed at balancing these competing risks. Lawmakers appear aware of the issue; some scholars have given it thought. But despite a year of focus on the threats to democracy, there is still no hard legislative proposal to close off the paths that Mr. Trump took in pursuit of overturning the last election.

Schools trying to stick with in-person learning scramble for substitutes