Grading the Dolphins’ win over Texans; plus stock up, stock down – The Mercury News 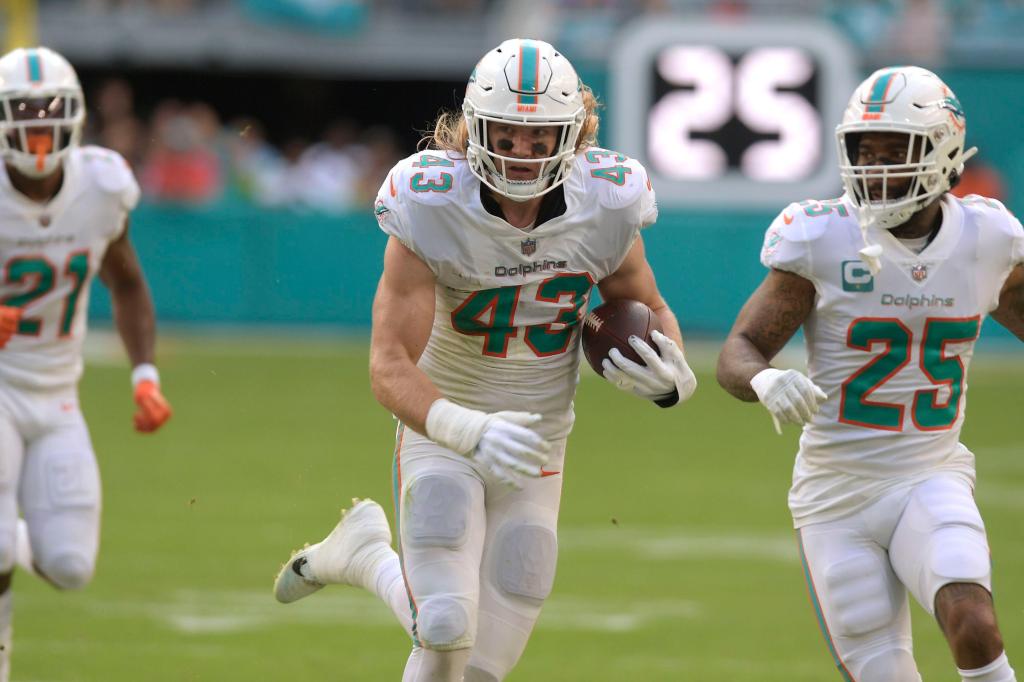 As the NFL regular-season calendar turns to December, the Dolphins (8-3) find themselves in first place in the AFC East, riding a five-game winning streak, and a streak of four consecutive games scoring 30 or more points.

Yeah, there’s a major injury concern involving left tackle Terron Armstead (pectoral) that could dampen the wave of enthusiasm, but the early report Sunday night provided a reason for guarded optimism that Armstead will return this season.

Quarterback Tua Tagovailoa is still playing well, the defense showed it can still make plays with two interceptions and a fumble return for a touchdown, and special teams turned in a solid performance.

The Dolphins, however, are done with their so-called “soft” part of the schedule, having faced five teams that now have a combined record of 15-39-1 (.344). Three of those games were at home.

The Dolphins are starting a six-game stretch against teams that have a combined record of 38-29 (.567). Three of those games will be on the road against quality teams, beginning Sunday at San Francisco.

Buckle up. This should be fun.

But before we go there, let’s put a bow on the Texans game, a matchup that saw the Dolphins dominate even though the offense only recorded two touchdowns and didn’t score any points in the second half.

Quarterback Tua Tagovailoa (22 of 36, 299 yards, one touchdown, 96.9 passer rating) was effective, but not as good as he had been the previous three games when he had passer ratings of at least 135. Pass protection broke down after left tackle Terron Armstead (pectoral) left late in the second quarter, basically surrendering five sacks in half a game. Armstead played 37 snaps (49 percent), perhaps offering a glimpse of what could happen if he misses any time. Receiver Jaylen Waddle (five receptions, 85 yards) had at least one drop. Fellow receiver Tyreek Hill had five receptions for 85 yards, pedestrian by the standard he’s established this season. The first half was good enough to beat almost any opponent, but the second half was shaky, at best.

Houston was ready. It was swarming all over the ball carriers. The Dolphins had 26 carries for 66 yards, an average of 2.5 yards per carry. Starter Raheem Mostert missed the game with a knee injury. Newly-acquired Jeff Wilson Jr., who rushed for 119 yards against Cleveland, had 39 yards on 13 carries. Wilson gave the Dolphins a boost the previous two games with his physical running style and desire to block pass rushers, but his physicality wasn’t felt against the Texans. If Armstead is gone for any length of time, the run game becomes vitally important because pass protection and the timing of the pass game could be vastly different. Most likely the Dolphins will need the 1-2 punch of the speedy Mostert and the physical Wilson if Armstead is sidelined.

Defending the pass: A

The Dolphins had two interceptions and five sacks. Texans quarterback Kyle Allen, starting in place of benched starter Davis Mills, was 26 of 39 for 215 yards, one touchdown, two interceptions and a 67.8 passer rating. The Dolphins’ pass rush trio of Bradley Chubb, Jaelan Phillips and Melvin Ingram accounted for two sacks and three quarterback hits while providing a good amount of pressure. Additionally, safety Verone McKinley III and linebacker Andrew Van Ginkel both recorded interceptions. Safety Eric Rowe put a ferocious hit on running back Dameon Pierce that caused a fumble, which cornerback Xavien Howard scooped up and ran back 16 yards for a touchdown.

Defending the run: A

Texans running back Dameon Pierce was held to 8 yards on five carries. Pierce entered the game seventh in rushing with 780 yards. The Dolphins shut him down. And that comes one game after they held Cleveland Nick Chubb, who is third in the NFL with 1,039 yards, to 63 yards rushing. Inside linebacker Elandon Roberts led the way with eight tackles followed by Phillips (seven tackles), defensive tackle Zach Sieler (six) and safety Jevon Holland, linebacker Jerome Baker, defensive tackle Christian Wilkins and Rowe, who each had four tackles apiece. The Dolphins made the Texans one-dimensional and shut down the Texans’ passing game.

Kicker Jason Sanders, who entered with a missed 29-yard field goal and two missed extra points in his previous two games, had a strong performance with three field goals and two extra points. Punter Thomas Morstead was also solid with six punts for an average of 49.3 yards per punt. The problem was the Texans averaged 16.2 yards per return on five punt returns.

The offense mustered just two touchdowns, 66 yards rushing, no second-half points and surrendered five sacks. But, overall, this was another good job by coach Mike McDaniel and his staff. The defense was outstanding. Special teams was good. The offense was good enough. Keeping focus can be tough in these situations. It was a home game that came days after Thanksgiving and the week after the bye. And the Dolphins jumped out to a 30-point halftime lead. Yeah, Houston threatened to make a second-half comeback, but it didn’t. So give the coaches credit for keeping the players on task. You’d have liked to see better overall production from the offense, but, hey, the Dolphins are 8-3 and in first place.

Hopefully, Sanders, an All Pro who had three field goals and two extra points against Houston, is back after a two-game downturn. The Dolphins will likely need him in a big way in the final six games, especially the next three. And if Armstead doesn’t play, there’s a good chance these will all be close games. If Sanders is back to his old self, the Dolphins can breathe a bit easier for these December and January games.

When Armstead left the game late in the second quarter, the pass protection struggled. And this was against the one-win Texans. Imagine what could happen against San Francisco and edge rusher Nick Bosa (11.5 sacks, third in the league). If Armstead misses any time, the Dolphins must find a way to protect Tagovailoa and keep the timing of the passing game intact. If not, life gets much more complicated for the entire team, not just the offense.

Ready for the Las Vegas A’s? Relocation speculations heat up