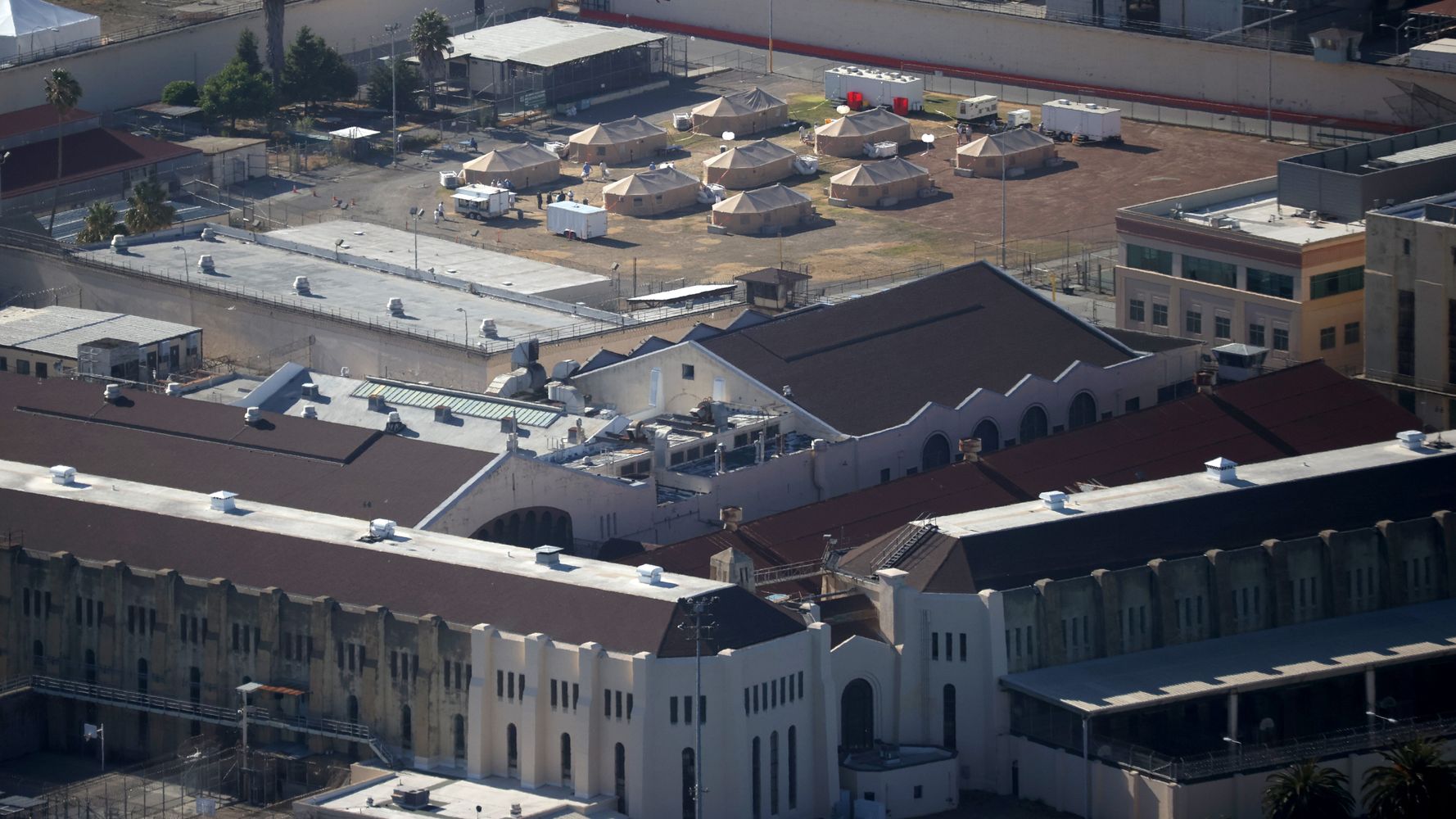 As the omicron variant spreads across the country, COVID-19 cases are again soaring throughout the California’s crowded prisons. The week of Dec. 12, the state prison system had 52 new confirmed cases since the previous week. By the week of Jan. 9, the number of new cases had spiked to 4,057.

The pandemic has disproportionately harmed incarcerated people, who have contracted and died from the virus at a much higher rate than the rest of the population. COVID-19 outbreaks also disrupt the things that make life in prison more bearable: When there is an outbreak, prisons usually respond by putting visitation and educational and rehabilitative programming on pause and confining incarcerated people to their housing units for as long as 23.5 hours a day.

But California Gov. Gavin Newsom (D) is continuing to fight in court against a vaccine requirement for prison workers, even as COVID-19 cases are again soaring throughout the state’s crowded prisons.

Newsom has touted California being the first state in the nation to require state employees and health care workers to get vaccinated or undergo regular testing and to require students to get vaccinated. But he has sided with the California Department of Corrections and Rehabilitation (CDCR) and the California Correctional Peace Officers Association (CCPOA), the union that represents correctional officers, in opposing vaccine requirements for most of the people who work in prisons. CCPOA endorsed Newsom in his 2018 election and contributed $1.75 million to his fight against a recall effort last year.

In prisons throughout California, incarcerated people have gotten vaccinated at higher rates than staffers, who are the most likely to bring the virus inside the facilities. Statewide, 81% of prisoners are vaccinated compared to 71% of staffers — although in some prisons, staff vaccination rates hover around 50%.

Incarcerated Californians are paying the price for staffers’ refusal to get vaccinated and Newsom’s failure to implement staff vaccination requirements. There currently are at least 5,498 confirmed cases among the incarcerated population and 4,676 among staff.

“It is evident that the California State Prison outbreak is being fueled largely by resistance to vaccinations by CDCR staff,” James King, the campaign manager at the Ella Baker Center for Human Rights, said in a statement.

Newsom’s decision “is harming prisons’ ability to staff prisons, and creating the conditions that have led to a statewide lockdown,” continued King, who was formerly incarcerated at San Quentin. “The cost of staff’s refusal to comply with reasonable safety measures is devastating for incarcerated people, who are once again experiencing mass outbreaks, 24-hour lockdowns, separation from loved ones, loss of access to programming, and serious consequences to their physical and mental health.”

With cases spiking, the state returned all prisons to “modified programming” on Jan. 9 for 15 days. CDCR claims that under the restrictions, prisoners have limited but regular access to phones and recreation time in the yard. Outdoor time varies by prison: According to CDCR spokesperson Terri Hardy, those incarcerated in Pelican Bay State Prison get 30 minutes a day in the yard. In reality, the conditions are much harsher, according to people who are locked up inside.

CDCR’s description of current COVID-19 restrictions is “an absolute lie,” a man incarcerated at Pelican Bay told HuffPost in a phone call, noting on Tuesday that it had been nine days since he was last allowed outside. He and another Pelican Bay prisoner, both of whom requested anonymity out of fear of retaliation, said that since the restrictions went into place, they had been confined to pods that consist of eight single-cells for between 22 and 23.5 hours a day. Because they never know when they’ll be let out of their pods, it’s difficult to coordinate phone calls with loved ones, they said.

Both men say they understand the need for COVID-19 precautions. But it’s hard to reconcile the extreme restrictions placed on them with the lack of care shown by those in charge. At Pelican Bay, 81% of prisoners are vaccinated, compared to just 49% of staffers. Both men say they often see correctional officers congregating in small offices without wearing a mask. It makes their sacrifices feel pointless and the restrictions placed upon them feel punitive.

“Their job is security,” the second man said. “This jeopardizes the safety of the inmates, for sure.”

Asked why Newsom was continuing to fight against vaccine requirements for prison workers, the governor’s press secretary, Daniel Lopez, did not provide an answer. Instead, he claimed that CDCR has “implemented rigorous COVID safety measures” and said that unvaccinated staffers have to undergo testing twice a week.

“I feel like I’m being locked down because people don’t wanna take the vaccine.”

Although vaccinations do not prevent COVID-19 infection entirely, they do provide significant protection against death or serious illness. “I feel like they locked us down because of the [correctional officers] that are not vaccinated. It’s not a bad cold to them. It’s some real stuff,” said Rahsaan Thomas, a co-host of “Ear Hustle,” a podcast created and produced in San Quentin. “I feel like I’m being locked down because people don’t wanna take the vaccine.”

The constant outbreaks and lockdowns are creating tension inside the prison. “There’s a lot of arguments about phones and different things,” Thomas said. “People are imploding. Dudes that normally make sense are just not making sense right now. I think people are really going through it.”

Four people incarcerated at San Quentin said they only had access to the yard three times a week. Phone access is limited to about 15 minutes a day and not everyone is able to get their turn each day. The coveted slots for video visits fill up instantly and the technology is unreliable.

San Quentin was the site of one of the worst COVID-19 outbreaks in the country during the early months of the pandemic. People imprisoned there and their loved ones describe a constant fear that things will deteriorate to 2020 crisis levels.

“What happened the first time around was a travesty. What’s going to happen the second time around?” asked Daniel Alem, who is incarcerated at San Quentin. Alem, who is immunocompromised, initially felt “uneasy” about the vaccine, he said, but felt he needed to get it to protect himself. He was also told that he wouldn’t be able to go to work, the library, or receive visits without being vaccinated.

Meanwhile, unvaccinated correctional officers continue coming to work, interacting closely with prisoners. Recently, a correctional officer who was escorting Alem to the medical center told him that the vaccine would mess with his reproductive system, a common and inaccurate anti-vaccine talking point.

Now, 91% of San Quentin prisoners are vaccinated, compared to just 77% of staff. Both Thomas and Alem said they are worried CDCR is relying too heavily on prisoners’ own vaccines to protect them from serious illness and death, despite not knowing what will happen with future coronavirus variants. As of Thursday, there were at least 279 active cases of COVID-19 among people incarcerated at San Quentin, although that number is likely an undercount.

Many people are refusing tests because they are afraid of being sent into solitary confinement, said Marion Wickerd, whose husband is incarcerated at San Quentin. During the 2020 outbreak, Wickerd’s husband was one of many prisoners placed in an isolation cell with no flushing toilets, running water or electricity after testing positive.

Some of those who have tested positive at San Quentin are being held in a crowded gymnasium to quarantine. The mother of one of the men in the gymnasium said on Tuesday that her son hadn’t had access to a shower since arriving at the gym on Jan. 10 and had only been able to call her three times. Meals for those in the gym, according to the mother, have consisted primarily of peanut butter and jelly sandwiches, sometimes with moldy bread.

“They’re cold and hungry,” said the mother, who requested anonymity out of fear of retaliation. “These men are being treated like animals.”

Last year, United States District Judge Jon Tigar ordered all CDCR workers to either get vaccinated or show proof of a religious or medical exemption. Tigar’s order followed the recommendation of a court-appointed receiver, a position established in 2005 after a lawsuit over the poor quality of medical care in California prisons.

“No one challenges the serious risks that COVID-19 poses to incarcerated persons. No one disputes that it is difficult to control the virus once it has been introduced into a prison setting. No one contests that staff are the primary vector for introduction. And no one argues that testing, even if done on a daily basis, is an adequate proxy for vaccination to reduce the risk of introduction,” Tigar wrote in his order. “All agree that a mandatory staff vaccination policy would lower the risk of preventable death and serious medical consequences among incarcerated persons. And no one has identified any remedy that will produce anything close to the same benefit.”

Although Tigar’s order echoed much of Newsom’s own messaging on COVID-19 vaccines, the governor appealed the order. The case is ongoing but an appellate court has temporarily blocked the vaccine mandate, which was supposed to go into effect earlier this month.

Denial of responsibility! Yours Headline is an automatic aggregator of the all world’s media. In each content, the hyperlink to the primary source is specified. All trademarks belong to their rightful owners, all materials to their authors. If you are the owner of the content and do not want us to publish your materials, please contact us by email – [email protected]. The content will be deleted within 24 hours.
COVID-19 vaccinegavin newsomprisonSan Quentin State Prisonvaccine mandate
0
Share

The third wave of corona will come to Maharashtra in December, a serious warning from…