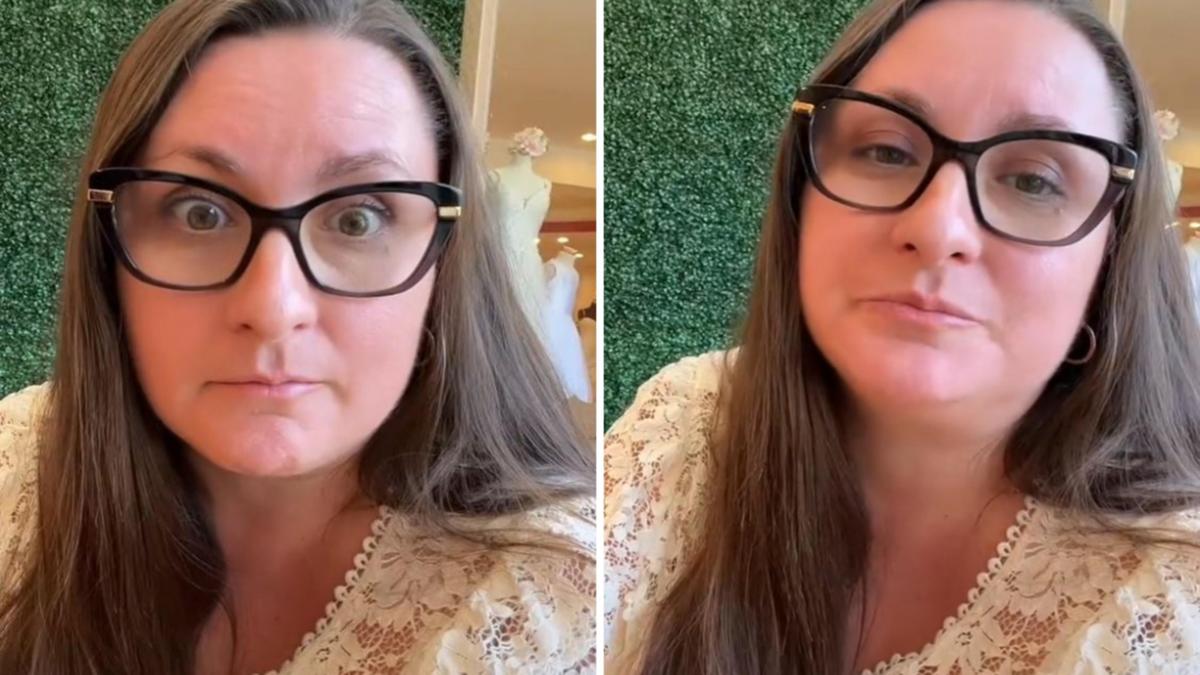 A mortified groom-to-be has landed himself in hot water after he accidentally gave his future wife’s $AU3,300 wedding dress away in an unfortunate bungle.

Kasia, a bridal shop owner from the US, told the jaw-dropping story on her TikTok after she received a distressing phone call from the groom and the bride’s brother begging her to reorder the custom-made gown five months out from the wedding.

For more Weddings related news and videos check out Weddings >>

The bride had given the gown to her mum for “safe keeping” so she hung it in her wardrobe.

But things took a dramatic turn after the bride’s grandmother died two weeks ago.

When organising the funeral, the bride’s mum had asked her brother and husband-to-be to “go get grandma’s wedding dress” out of her closet, and take it to the funeral home, because she wanted to be “buried in her gown”.

However, the boys picked up the wrong dress.

“I got a phone call from the groom, frantic as hell, crying practically… He asks, ‘I need to know if you can reorder this dress’,” Kasia recalls.

Confused, she asked if everything was ok.

“He breaks down and starts crying, then I hear another guy in the background and he grabs the phone out of his hand and says, ‘Listen, I’m the brother of the bride’. Then he tells me what happened,” she said.

“Well it’s an unfortunate situation. The bride gave the dress to her mother to put in her closet – no one goes in there, nobody, just mum.

“He says, ‘Well two weeks ago my grandma died. Grandpa was buried in his tuxedo so grandma wanted to be buried in her own wedding gown’.”

“When all this happened, mum frantically called me and my future brother-in-law to go get grandma’s wedding dress out of the closet so we did,” he said.

The unsuspecting boys dropped the bride’s dress off at the funeral home.

When Kasia finally realised where the wedding dress was, she admitted: “I swear, I think I stopped breathing.”

Commenting on the situation, she said: “So the boys did just that. Being guys they didn’t know better. They didn’t know there were multiple wedding dresses in the closet.”

Kasia asked the boys about the moment they realised their mistake.

“I said, ‘Wait a second, so when did you notice the dress was missing? Like, grandma is wearing it, right? Didn’t you guys see her before she got buried?’” Kasia asked them.

The boys told her their grandma was “buried in a closed casket”.

“So no one knew the bride’s wedding dress was on grandma,” Kasia said.

“This dress is buried six feet under with grandma. This dress has been underground for two weeks now.”

After trying desperately to reorder the same dress, the bridal shop owner had to break the news to the groom and brother that she was unable to get the customised gown in time for the November wedding.

Kasia came up with “contingency plans” for other gowns.

But she told the desperate lads that, no matter what the outcome, the bride would find out – because any dress would look different to what she had purchased.

“So on a conference call, I called the bride’s mum, the brother and the groom. Everyone was on pins and needles, freaking out,” Kasia said.

“They all avoided the bride for two days until they heard from me.

“I gave them all these ideas but said, ‘In the end, the bride is going to find out’.

“So they made the executive decision to actually come clean, which I’m glad they decided to do.”

There was, however, another surprising turn of events.

And Kasia was relieved to confirm a “happy ending” to the wedding dress fiasco.

“Within 24 hours of [the conference call], the bride called and asked, ‘How hard would it be to enlarge the dress that I have?’” Kasia said.

“I’m like, ‘That dress is a mermaid. I don’t think we could enlarge it that much. What’s going on? And congratulations.”

Kasia added: “Yeah, she was pregnant. She was thrilled about getting a new dress. And they came clean. Everything worked out.”

‘Wasn’t prepared for that’

The store owner said she shared the couple’s dress dilemma only once everything was resolved.

Her three-part videos have been viewed more than six million times, with thousands confessing they were “invested” in the story.

“When I saw [the story] my jaw dropped! Kasia I am dying,” one woman wrote.

Another said: “Me thinking he’s freaking out because he just accidentally saw the dress before the day… I WISH IT WAS JUST THAT!”

One revealed: “At the end of the first video, I literally gasped and said out loud, ‘Oh noooo!’”

Another suggested: “I thought he accidentally damaged it. I was not prepared for that ending.”

One added: “Grandma was buried in a mermaid dress!”

While another said: “Wow the happiest ending you could’ve asked for.”

Husband tells of surprising reason he ended his marriage

Denial of responsibility! Yours Headline is an automatic aggregator of the all world’s media. In each content, the hyperlink to the primary source is specified. All trademarks belong to their rightful owners, all materials to their authors. If you are the owner of the content and do not want us to publish your materials, please contact us by email – [email protected]. The content will be deleted within 24 hours.
LifestyleWeddings
0
Share