Djokovic back into swing in Australia, visa questions linger 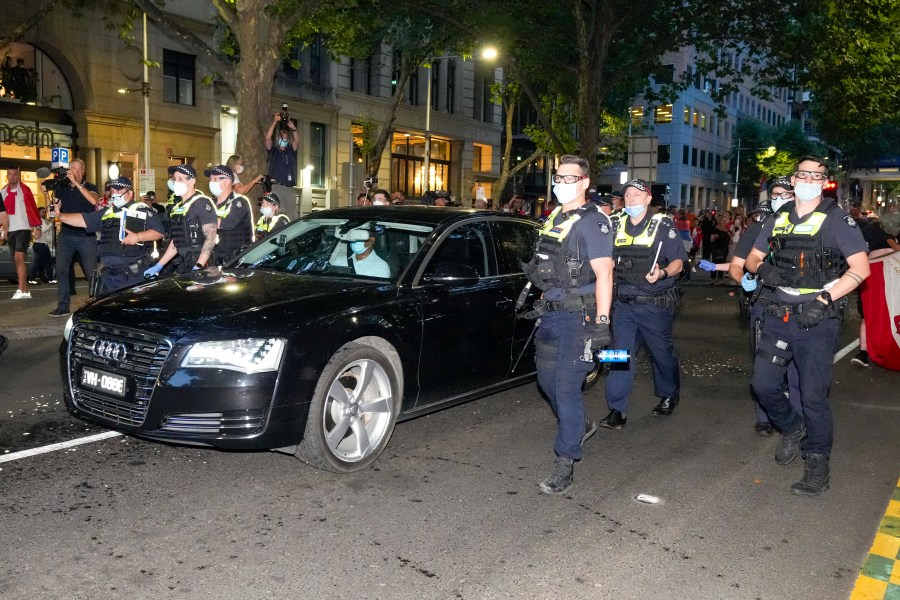 MELBOURNE, Australia (AP) — Novak Djokovic held a practice session on Tuesday, a day after he left immigration detention, focusing on defending his Australian Open title even while he still faces the prospect of deportation because he’s not vaccinated against COVID-19.

The top-ranked tennis star hit the show courts of Melbourne Park, where the tournament is held, within hours of winning a legal battle that allowed him to stay in the country.

At issueis whether he has a valid exemption to rules requiring vaccination to enter Australia since he recently recovered from COVID-19. A judge ruled Monday he could stay, but the immigration minister could still send him home.

There were also new questions raised Tuesday over an immigration form, on which he said he had not traveled in the 14 days before his flight to Australia. The Monte Carlo-based athlete was seen in Spain and Serbia in that two-week period.

The back and forthover whether Djokovic complied with Australia’s rules has caused a furor in the country and beyond. When the vocal skeptic of vaccines was first granted a visa to travel to Melbourne, many complained he was being given special treatment from a country known for its strict travel restrictions during the pandemic.

But amid a flood of confusing information about what the rules are, others have charged Djokovic has become a convenient scapegoat for an Australian government facing criticism for its recent handling of the pandemic.

The nine-time Australian Open winner held a practice Tuesday afternoon at Rod Laver Arena. Soon after, tournament organizers made him the top-seeded player in the men’s singles draw.

The athlete was seen hitting shots from behind the baseline, taking feedback from his coach, and stretching beside the court with a trainer. He spent four nights confined to an immigration hotel and now is getting back into the swing less than a week before the Grand Slam tournament starts.

“Despite all that has happened, I want to stay and try to compete @AustralianOpen. I remain focused on that,” Djokovic tweeted in the early hours of Tuesday. “I flew here to play at one of the most important events we have in front of the amazing fans.”

But he still faces the prospect of deportation before the first match.

Djokovic was given an exemption by the Victoria state government and Tennis Australia, the tournament organizer, from its vaccination rules to compete because he was infected with COVID-19 last month. That apparently allowed him to receive a visa to travel.

But federal border authorities stopped him on arrival last week and canceled his visa. Lawyers for the government have said an infection in the previous six months was only grounds for an exemption in cases in which the coronavirus caused severe illness.

It’s not clear why Djokovic was ever granted a visa if that’s the case.

A federal judge reinstated Djokovic’s visa Monday on procedural grounds, saying he hadn’t been allowed enough time to speak to his lawyers to contest the decision. But Immigration Minister Alex Hawke is still considering using his power to deport the 34-year-old Serbian under separate legislation.

Hawke’s office issued a statement saying the matter was still under consideration.

Australian Prime Minister Scott Morrison’s conservative government has blamed the debacle on Tennis Australia, which ministers accuse of misleading players about vaccine requirements. But newspapers have reported that the sporting body had pleaded with the Department of Home Affairs to check the visa paperwork of Djokovic and other players before their flights.

A new potential stumbling block also emerged Tuesday after documents released by the Federal Circuit Court revealed Djokovic told authorities he had not traveled in the 14 days before his flight to Australia.

Djokovic touched down in Melbourne just before midnight Wednesday, answering “no” to the question about previous travel on his Australian Travel Declaration form.

But he was filmed playing tennis in the streets of the Serbian capital, Belgrade, on Dec. 25, and later training in Spain — all within the 14-day window. He traveled to Australia from Marbella, Spain.

Djokovic told border officers that Tennis Australia completed the declaration for him, but the officer who canceled his visa said that the body would have done that based on information from Djokovic himself.

It was not clear if the document came up during Monday’s hearing.

The form notes that giving false or misleading information is a serious offense — and it could be grounds for deportation.

The drama has polarized opinions and elicited strong support for the 20-time Grand Slam winner in his native Serbia.

Morrison spoke about the issue with Serbian Prime Minister Ana Brnabić on Tuesday, and they agreed to keep in touch.

“The PM explained our non-discriminatory border policy and its role in protecting Australia during the COVID-19 pandemic,” Morrison’s office said in a statement.

“The prime minister especially emphasized the importance of the conditions for training and physical preparation for the upcoming competition,” RTS reported.

The drama has put Morrison’s government in a tight spot ahead of elections due by May. While his government was widely praised for containing the nation’s COVID-19 death toll at the start of the pandemic, he has recently been criticized for loosening some rules, just as omicron cases have been rapidly surging.

The opposition home affairs spokesperson, Kristina Keneally, blamed the visa confusion on a lack of planning by Morrison’s government and said the saga made Australia “look like a bit of a joke” on the world stage.

Andy Murray, who lost four Australian Open finals to Djokovic, said the court win was a “positive” for his fellow major winner but there were still details to clarify.

“I’m sure we’ll hear from him in the next few days,” Murray said. “I’m hoping we can move on from it now. It looks like he’s going to be able to play and compete in the Australian Open.”

Your Flight Has Been Canceled or Delayed. What Should You Do?

Who is MVP? How does Golden State grade out?

The Cowboys are the world’s most valuable team. So why are they so bad at winning? |…