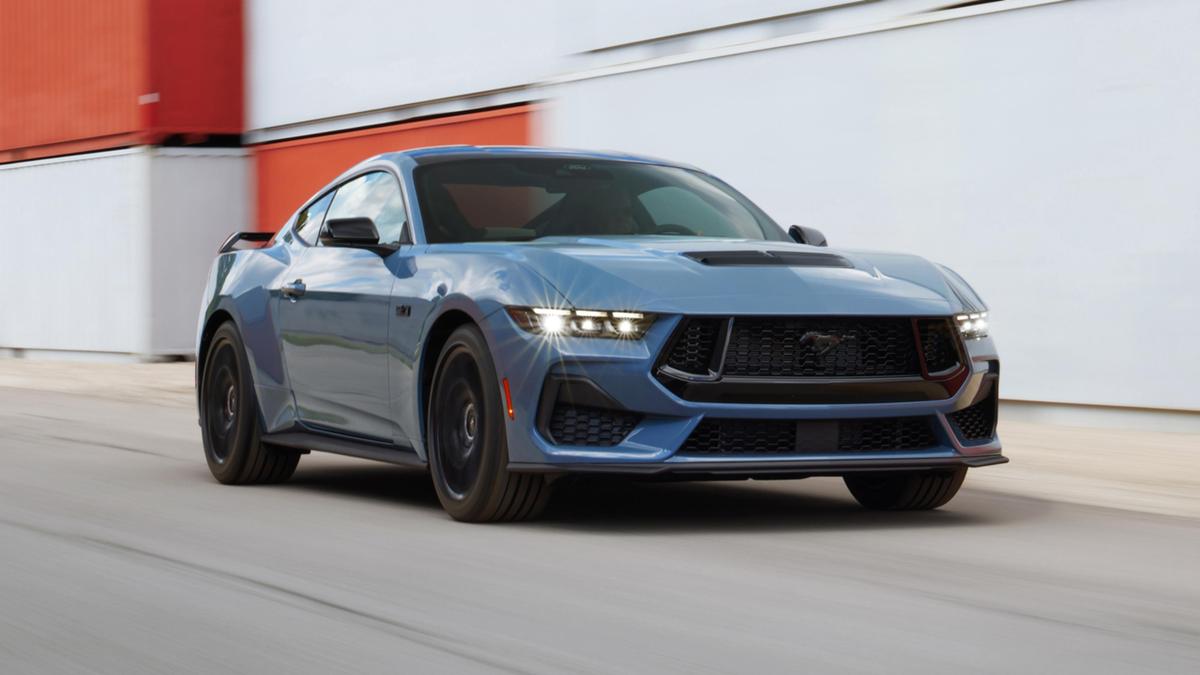 Ford says its long-running Mustang is the soul of the company. Much like Porsche’s 911, this pony car is a bonafide brand icon.

The model remains enduringly popular, and this helps explain why the Mustang remains the only non-SUV passenger model still in Ford’s American lineup.

An icon often brings with it distinct design traits, which presents Ford with much the same dilemma as Porsche faces with the 911.

For more Motoring related news and videos check out Motoring >>

Straying too far from the model’s roots risks compromising the integrity of the Mustang brand, while not providing enough change risks a perception that the model is old-fashioned and out of touch with new tastes.

With the seventh-generation Mustang, Ford decided to walk this line with an evolutionary approach, aiming to modernise the vehicle with the latest technology and a new exterior that preserves the overall silhouette and classic profile of its predecessors.

A distinction that remains niche, but important to preserve, is the difference between ‘sports cars’ and American ‘pony cars’.

In the traditional sense, sports car balances power with control and implies a sleek front-end that emphasises the car’s aerodynamic efficiency.

In contrast, pony cars such as the Mustang and Camaro, as well as muscle cars such as the classic Dodge Charger, have more of a focus on outright power and an aggressive attitude that hints at the power lurking underneath.

Corresponding to this distinction, the new seventh generation Mustang presents a more monolithic, bluff front-end that harks back more closely to traditional pony car design ideals than the outgoing model.

Key to this is the bonnet which features a near-clamshell design. Unlike its predecessor, the new Mustang incorporates a single, strong horizontal line that acts as a monobrow, stretching across the headlights and neatly framing the front grille.

This creates a wider, bluffer front end compared to the more focused look of the sixth generation car, while also seamlessly integrating Mustang style trademarks such as the distinctive tri-bar LED daytime running lights, now with a horizontal orientation to match the bonnet line.

Rather than a litany of over-designed mesh pieces, the lower front bumper continues this horizontal theme with a simple, elegant design for the air intakes, divided into three distinct areas.

Side profile: A Ford Camaro?

The new Mustang’s side profile is one of the more controversial aspects of the car’s overall exterior design, due to its interpretation of archetypal Mustang design elements.

Fastback Mustangs, especially the classic models from the mid-1960s, have been defined by three key design elements.

The first is a glasshouse that is steeply raked at the rear but flows seamlessly into a separate boot, which may also incorporate a small rear quarter-light or shark-fin type graphic or design element.

An accentuated but flat shoulder then serves to optically widen the car and further emphasise the raked roofline. Finally, the side profile features a distinct upwards kick, or hockey stick graphic, flowing from behind the front door through to the front wings.

While the new Mustang continues to feature a steeply raked fastback roofline, it largely dispenses with the strong character lines such as the hockey-stick graphic present on the classic ’60s Mustang, as well as the sharp crease flowing through the door handle and rear three-quarter panel of the outgoing Mustang.

Instead, more emphasis is placed on the rear haunches, with a longer, wider character line that flows into the tail.

This has the effect of bringing the rear three-quarter aspect of the new Mustang closer to the design tropes espoused by rivals such as the Chevrolet Camaro.

The tail of the new Mustang has seen perhaps the least change compared to its predecessor.

Retaining the iconic tri-bar design, the new Mustang offers a revised interpretation of this trait compared to its predecessors, now featuring a slightly compressed, but more angular ‘bent’ shape to each vertical light bar.

The faux diffuser and rear bumper have also been updated with a more aggressive, sportier look that practically translates into a larger, more protruding design.

The interior offers perhaps the clearest evidence of where Ford has attempted to modernise the car and bring it in line with current, screen-heavy design trends.

The outgoing Mustang was well-known for a unique, if not particularly luxurious, interior with differentiated elements such as turned aluminium trim, classic round air-vents framed by a dual-cowl dashboard, and aircraft style plasti-chrome toggle switches for air-conditioning and heating controls.

The latest Mustang, in contrast, features a far more technologically sophisticated dashboard, but also one that would not be out of place in any sporting SUV or other passenger car.

Ford claims the design was inspired by younger people who grew up playing racing video games.

Consequently, the centrepiece of the new Mustang is a freestanding 12.4 inch digital instrument cluster and 13.4 inch infotainment system (almost aping the iDrive 8 displays used in the latest BMWs) covered by a single pane of glass and angled towards the driver.

To facilitate this, the more intricate double cowl design and bulls-eye A/C vents have been ditched for conventional replacements, while the aluminium trim has also been replaced by a cheaper plastic faux carbon-fibre material.

Other improvements include a flat-bottomed steering wheel that may help optimise knee-room for drivers, as well as an electronic parking brake that includes a drift function.

Dig these weekend design pieces? More can be found here:

Denial of responsibility! Yours Headline is an automatic aggregator of the all world’s media. In each content, the hyperlink to the primary source is specified. All trademarks belong to their rightful owners, all materials to their authors. If you are the owner of the content and do not want us to publish your materials, please contact us by email – [email protected]. The content will be deleted within 24 hours.
LifestyleMotoring
0
Share

‘It’s a joke first and a game second’: how the delightful Trombone Champ went viral | Games

The Ashok, Delhi Millet Breakfast Will Take You n a Journey of Healthy Lifestyle

Is Kim Kardashian’s Honey Blonde Hair the Sign of a New Era?