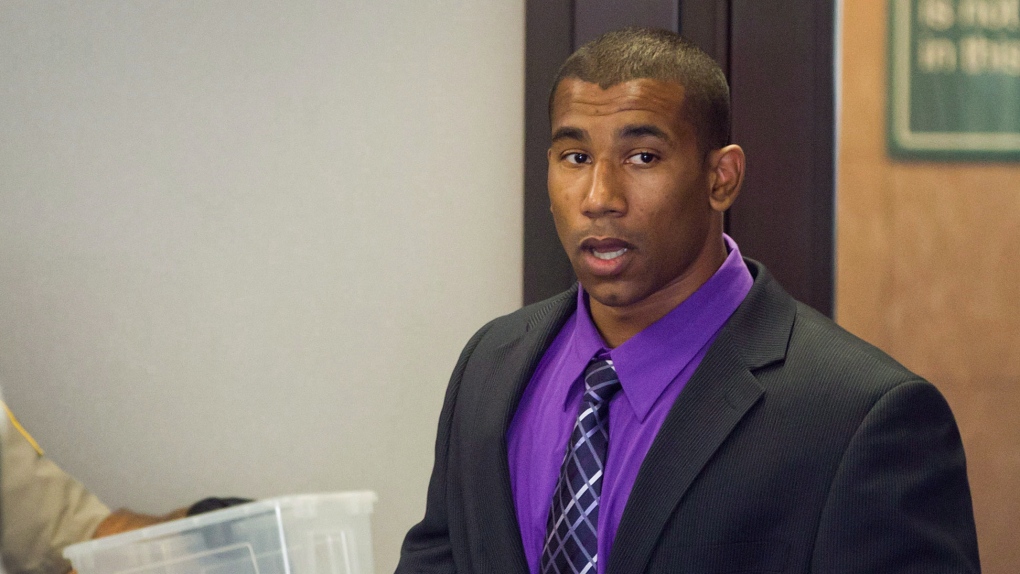 
A former professional football player who was convicted of killing his ex-girlfriend will not be eligible for parole for 14 years.


Joshua Boden, who once played with the Canadian Football League as a wide receiver, learned his sentence in a Vancouver courtroom on Friday.


Second-degree murder convictions come with an automatic life sentence in B.C., so it was up to the judge to determine when Boden would be eligible for parole. The Crown asked for 15 years, while Boden’s legal team suggested 12 years.


Boden, 35, was found guilty last year of the second-degree murder of Kimberly Hallgarth. The 33-year-old was killed in 2009 in the Burnaby, B.C., home she shared with her three-year-old daughter.


During Boden’s sentencing hearing, the B.C. Supreme Court heard that Boden viciously beat his ex-girlfriend, choked her and then staged the scene in an effort to make her death look like an accident.


The Crown called her murder “blunt, brutal and horrific,” with prosecutor Brendan McCabe describing her injuries as the most shocking he’d seen in his career.


McCabe told the court photos of her injuries from a previous assault by Boden were sent to then-coach of the B.C. Lions Wally Buono. He said that Boden blamed Hallgarth for the end of his career.


The murder happened the year after Boden was released from the B.C. Lions, which he’d only signed with in 2007.


At the time of his release, he planned to play with the Hamilton Tiger-Cats, but never played a regular-season game with the team. He was cut from the team.


Boden maintained his innocence through the trial process.


With files from CTV News Vancouver’s Maria Weisgarber in court, and The Canadian Press

‘Vote For Democrats’ Is Not Enough In A Post-Roe America