Catherine, Princess of Wales, fights back tears as she farewells Queen Elizabeth II 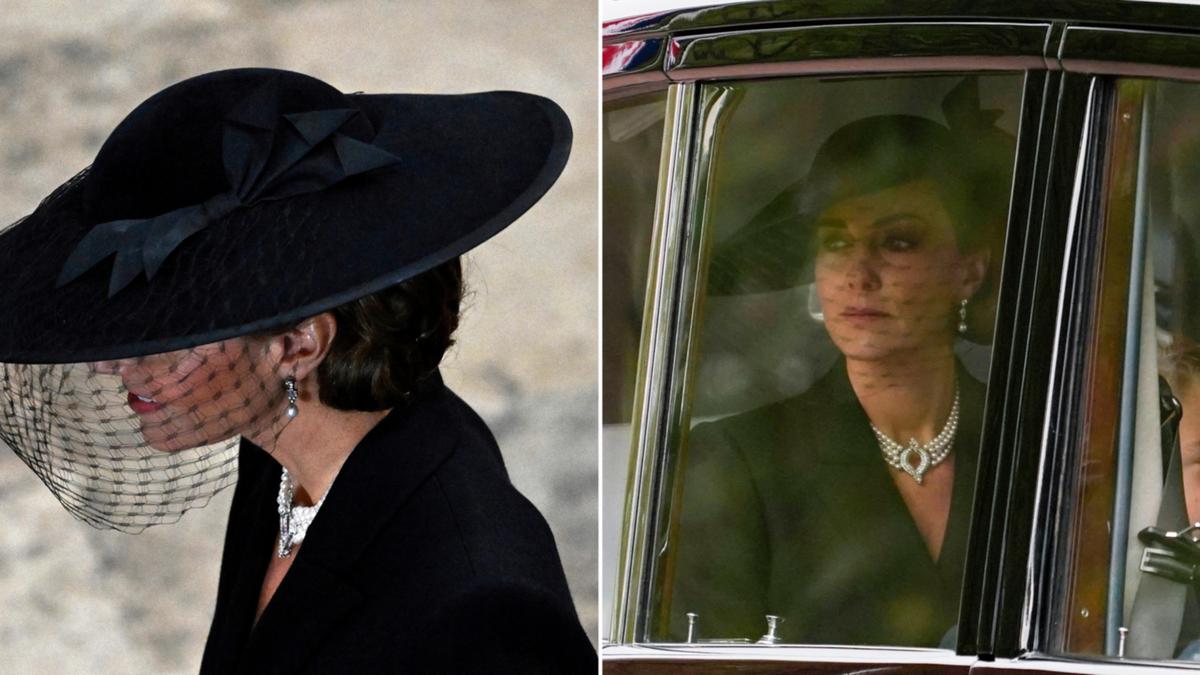 New images show the understandably heavy toll that the death of Queen Elizabeth II has taken on Catherine, Princess of Wales.

Princess Kate has made no secret of her love and deep respect for the Queen, describing her as being “very generous” and praising the late monarch for her “gentle guidance”.

WATCH THE VIDEO ABOVE: The Princess of Wales arrives for the Queen’s funeral

Images showing the royal fighting back tears as she arrived at Westminster Abbey with her eldest children Prince George and Princess Charlotte.

Putting on a brave face as she guided her children into the ceremony, Princess Kate appeared teary yet resilient.

“Kate looks how we all feel – sad but trying to be strong,” noted one Twitter user.

Unusual detail for Harry and Meghan in funeral seating plan

In a sweet nod to the Queen, Kate is wearing a Japanese pearl choker necklace once treasured by the late monarch.

The necklace has four rows of pearls with a central clasp, which features three rows of diamonds at the top and bottom with marquise diamonds.

It’s believed the Queen loaned the choker to Kate for the first time in 2017.

The late monarch also famously lent it to Diana, Princess of Wales, to wear during a state visit with Queen Beatrix of the Netherlands in 1982.

It’s understood pearl earrings are a special tradition for royals during times of mourning.

The loved royal is known to have been very fond of her husband’s grandmother, and comfortable in her presence, as evidenced by numerous photos over the years of the pair smiling or laughing.

Kate has described the late monarch as a “doting granny” to her three children with Prince William, and has commented on the Queen’s “thoughtfulness” and “care in looking after everybody”.

In 2016, she revealed she had once drawn on an old Middleton family recipe to make marrow chutney for the Queen, but was concerned her mother-in-law wouldn’t like it.

“I was slightly worried about it, but I noticed the next day that it was on the table,” she said on the documentary Our Queen at Ninety.

“I think such a simple gesture went such a long way for me and I’ve noticed since she’s done that on lots of occasions and I think it just shows her thoughtfulness, really, and her care in looking after everybody.”

The Princess of Wales also spoke about the Queen’s love of family, saying she was one of the first visitors to Kensington after the birth of Princess Charlotte.

“She always leaves a little gift or something in their room,” Kate revealed in the documentary.

“That just shows, I think, her love for her family.”

And on the Queen’s influence, as Kate navigated her own royal duties, the Princess called her “very generous” and “a gentle guidance”.

“She’s been very generous and not sort of being forceful at all in any of her views,” Kate told the documentary.

“I feel she’s been sort of a gentle guidance, really, for me.”

Side by side for the final farewell: Princes William and Harry unite at Queen’s funeral

Denial of responsibility! Yours Headline is an automatic aggregator of the all world’s media. In each content, the hyperlink to the primary source is specified. All trademarks belong to their rightful owners, all materials to their authors. If you are the owner of the content and do not want us to publish your materials, please contact us by email – adm[email protected]. The content will be deleted within 24 hours.
EntertainmentQueen Elizabeth IIRoyal Family
0
Share

Billy Eichner made a great rom-com. Now its audiences’ turn.