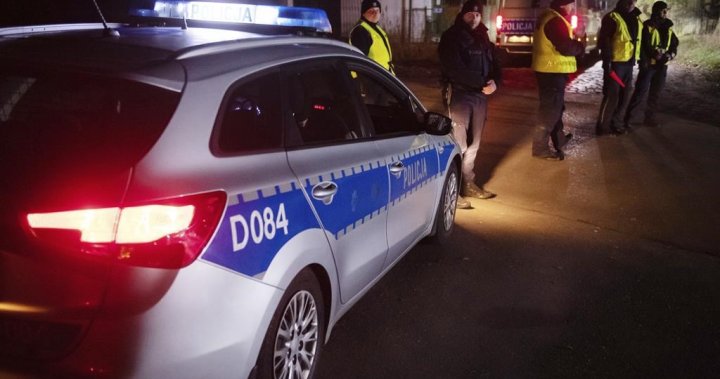 Poland’s foreign ministry said early Wednesday that a “Russia-made missile” was responsible for Tuesday’s explosion in Przewodow, a Polish village near the border with Ukraine, that killed two people. Russia was striking Ukraine’s energy facilities throughout the day with its biggest barrage of missiles yet, hitting targets from east to west and causing widespread blackouts.

A senior U.S. intelligence official told The Associated Press earlier on Tuesday that a Russian missile had hit Przewodow during the barrage. The official spoke on condition of anonymity because of the sensitive nature of the situation.

Russia’s defence ministry denied the reports, describing them as a deliberate provocation. A Kremlin spokesperson told Reuters he had “no information” about the incident.

International experts were still assessing the site of the explosion to determine what happened, Polish and NATO authorities said. If confirmed, the strike would mark the first time in the war that Russian weapons have come down on a NATO country.

However, at the G20 summit in Indonesia, U.S. President Joe Biden said he had seen information that cast doubt on some of the earlier reports, including on Russia’s culpability.

“There is preliminary information that contests that,” Biden told reporters when asked if the missile had been fired from Russia. “It is unlikely in the lines of the trajectory that it was fired from Russia, but we’ll see.”

It was not immediately clear whether Biden was suggesting that the missile hadn’t been fired by Russia at all. Ukraine still maintains stocks of former Soviet and Russian-made weaponry, including the S-300 air-defense missile system.

Biden spoke after he convened an “emergency” meeting of the Group of Seven and NATO leaders in Indonesia Wednesday morning for consultations on the attack.


Prime Minister Justin Trudeau, who is also attending the G20 summit, said he had been briefed on the latest developments.

“I am aware of the reports. It would be imprudent for me to comment on them at this point. I am in close touch with our Polish allies and we are monitoring the situation very closely,” National Defence Minister Anita Anand told reporters in Ottawa.

“As I said, we are monitoring the situation. I am receiving updates regarding this report and very closely in touch with our Polish allies at this time. It would be imprudent for me to comment further.”

Foreign Minister Melanie Joly said her ministry was in contact with her Polish counterparts and offered condolences to “the victims, their loved ones and the Polish people.”


A NATO spokesperson confirmed to Global News that Secretary General Jens Stoltenberg will chair an emergency meeting of NATO ambassadors on Wednesday to discuss the incident.

It’s a less severe move than invoking Article 5, which would require the alliance to come to the defence of any member that suffers an “armed attack” — suggesting NATO is not yet confident that the strike was deliberate, even if it came from Russia.


Polish President Andrzej Duda told reporters Wednesday that it was “highly probable” his country’s ambassador will request an activation of Article 4 at the meeting.

Stoltenberg confirmed he had spoken with Duda but did not address any further actions NATO might take, adding it was “important that all facts are established” first.

Spoke with President Duda @prezydentpl about the explosion in #Poland. I offered my condolences for the loss of life. #NATO is monitoring the situation and Allies are closely consulting. Important that all facts are established.

Duda said he had spoken with Ukrainian President Volodymyr Zelenskyy, who assured him the missile was launched by the Russians. However, Duda said investigators had not yet completed their work or made a determination.

“It was most likely a Russian-made missile, but this is all still under investigation at the moment,” he said Wednesday.

Polish media reported that the strike took place in an area where grain was drying in Przewodow.


None of the statements from Poland or its allies addressed the circumstances of the strike, including whether it was a targeted Russian attack or debris from an intercepted missile that was meant for a Ukrainian target. NATO called it “a tragic incident.”

The Pentagon has yet to confirm any of the reports.

“We are aware of the press reports alleging that two Russian missiles have struck a location inside Poland near the Ukraine border. I can tell you that we don’t have any information at this time to corroborate those reports and are looking into this further,” Pentagon spokesperson Brig. Gen. Patrick Ryder told a news briefing Tuesday.

The U.S. National Security Council said it was also looking into the reports, adding later it could not confirm anything after discussions with its Polish counterparts. The council is expected to discuss the Polish incident Wednesday during a previously-scheduled meeting on Ukraine.

We’ve seen these reports out of Poland and are working with the Polish government to gather more information. We cannot confirm the reports or any of the details at this time. We will determine what happened and what the appropriate next steps would be.

Zelenskyy on Tuesday evening called the alleged Russian attack on Poland “a significant escalation” of the conflict, but provided no evidence to prove Russia was responsible.

He said the incident was proof that his repeated warnings of “Russian terror” expanding beyond Ukraine were coming to pass, and urged NATO to strike back.

“The longer Russia feels impunity, the more threats there will be to anyone within reach of Russian missiles,” he said in his nightly video address, which was posted to his Telegram channel.

“To fire missiles at NATO territory! This is a Russian missile attack on collective security! This is a very significant escalation. We must act.”


However, Latvian media reported that both the country’s defence minister and head of the armed forces said in an interview it was unlikely NATO’s Article 5 will be invoked.

Latvian Prime Minister Krišjānis Kariņš later called an emergency government meeting for Wednesday morning to hear reports on regional security and “to be ready for further action.” Latvia shares a border with Russia as well as Kremlin ally Belarus.

“Latvia and its NATO allies are ready for any situation to defend their citizens and territories,” he said on Twitter.

Latest news from Poland is most concerning. We are consulting closely with Poland and other Allies. Estonia is ready to defend every inch of NATO territory. We’re in full solidarity with our close ally Poland 🇵🇱

“Estonia is ready to defend every inch of NATO territory. We’re in full solidarity with our close ally Poland,” the ministry said.

Estonian Foreign Minister Urmas Reinsalu said his country was consulting with allies about “a united and resolute response.”

“It is an extremely serious incident,” he said in a statement.

Czech Prime Minister Petr Fiala said if the reports were true, the incident would be an escalation by Russia. Lithuania President Gitanas Nauseda tweeted support for Poland, and that “every inch of NATO territory must be defended!”

While we follow the situation closely, all my thoughts & solidarity are with the people of Poland.

The explosion in Poland came amid a barrage of Russian missiles that struck power facilities across Ukraine, which officials in Kyiv called “the most massive” bombardment of energy infrastructure in the nearly nine-month-long war.

Zelenskyy said Russia fired at least 85 missiles, most of them aimed at the country’s power facilities, and blacked out many cities.


The aerial assault, which resulted in at least one death in a residential building in the capital, Kyiv, followed days of euphoria in Ukraine sparked by one of its biggest military successes — the retaking last week of the southern city of Kherson.

The power grid was already battered by previous attacks that destroyed an estimated 40 per cent of the country’s energy infrastructure.

The barrage also affected neighboring Moldova. It reported massive power outages after the strikes knocked out a key power line that supplies the small nation, an official said.

Russia’s attacks on Ukraine took place in the shadow of the G20 summit, where world leaders were already expected to discuss the war and the resulting impact on global food security and energy.

A formal condemnation of Russia’s invasion and nuclear threats by the G20 — which counts Russia as a member, despite President Vladimir Putin not attending this week’s summit — could come on Wednesday.

— with files from The Associated Press and Reuters

Denial of responsibility! Yours Headline is an automatic aggregator of the all world’s media. In each content, the hyperlink to the primary source is specified. All trademarks belong to their rightful owners, all materials to their authors. If you are the owner of the content and do not want us to publish your materials, please contact us by email – [email protected]. The content will be deleted within 24 hours.
canadais poland part of natomissileNATOnato article 5Polandpoland article 5poland in nato
0
Share

Android users in India, beware these 2 lottery apps are fake