Cal pauses construction at People’s Park due to ‘violence’ 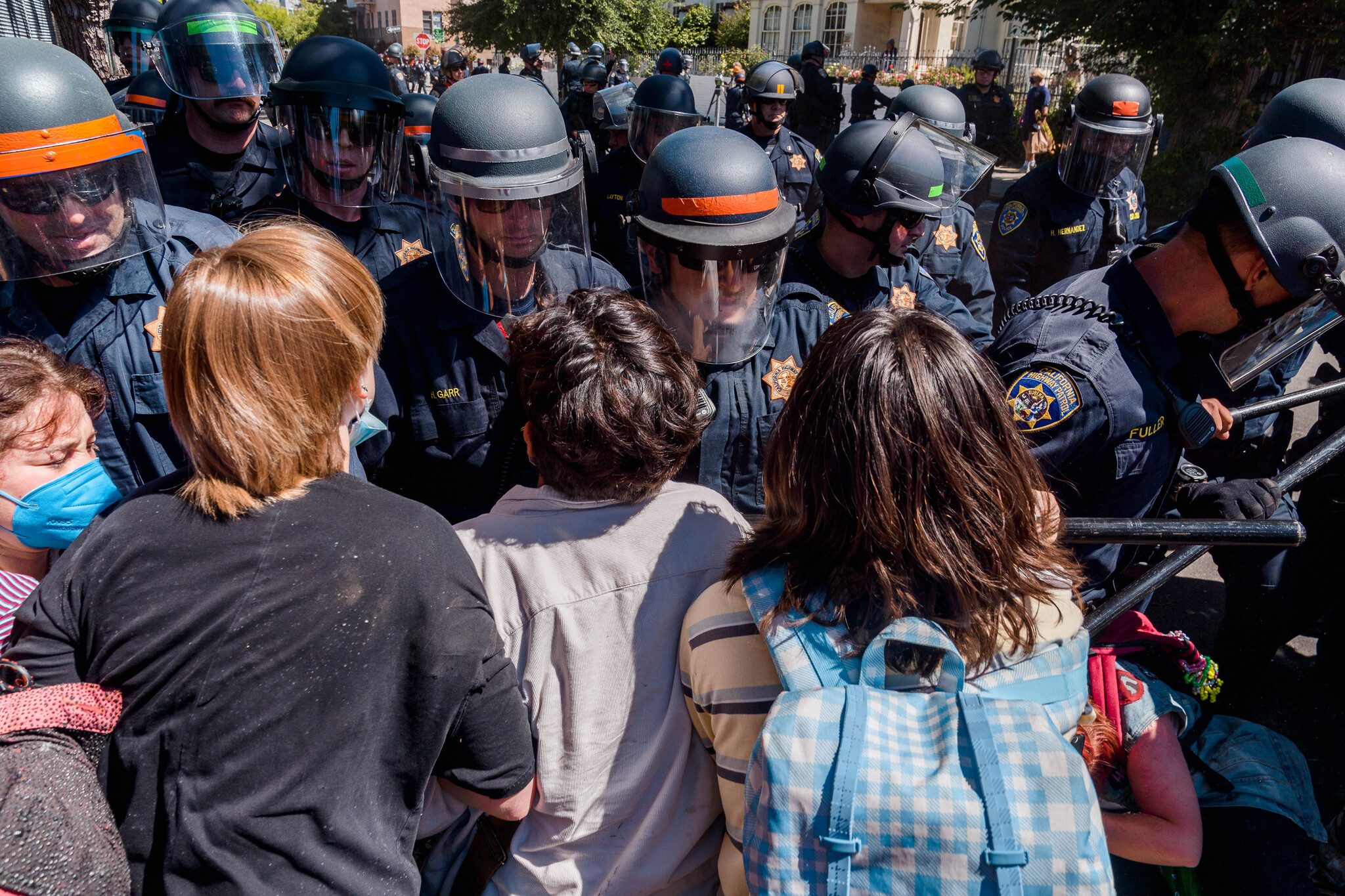 UC Berkeley said Wednesday afternoon that it was pausing construction that started this morning of a student housing project at People’s Park due to “the destruction of construction materials, unlawful protest activity, and violence.”

Police in riot gear descended on the block-square plot of land just off Telegraph Avenue before sunrise to clear out a small homeless encampment and put fencing around the area. A work crew showed up at the site as soon as the sun came up, bringing in construction equipment and felling trees.

“They are currently cutting down trees in the park with chainsaws,” said Ramon Mendoza, who is part of a movement to preserve the park. A video posted on Twitter at 9:36 a.m. showed the tree work underway.

KRON posted a video at 9:23 a.m. of protesters blocking construction trucks “to stop them from clearing any trees.”

As the day progressed, more protesters descended on the area, pulling down the fence and flooding the park.

UC Berkeley said several arrests were made, but couldn’t provide detailed information about numbers and charges as of 2 p.m.

The group Defend People’s Park said early this morning that several forklifts, large moving vehicles and trucks with fencing were at the park before sunrise.

“They are throwing residents’ items away,” the group wrote on Twitter.

The university said in a statement that when work began this morning, two or three unhoused people were in the park who had been “previously offered shelter, repeatedly notified that the park was soon to be closed, and informed that overnight camping in the park is not permitted.”

“Last night, alternative shelter, transportation, and storage for belongings was offered again to each and every person when the park was closed, an offer that remains available for all who need and want it,” the university said.

An Alameda County Superior Court judge ruled on Friday that UC Berkeley can start construction on a 16-story building that will house more than 1,100 students.

Activists and student groups stood on the sidelines protesting the park’s closure. They have long disputed the university’s project and called for keeping the site that’s listed on the National Register of Historic Places a public green space.

Located in the center of the Bay Area’s high-priced and famously tight real estate market, UC Berkeley faces a student housing shortage; according to a 2017 survey, it “has the lowest percentage of beds for its student body of any campus in the UC System.” The survey also found that 10% of respondents self-identified as having experienced homelessness at some point while attending UC Berkeley.

In addition to student housing, the People’s Park housing complex would provide up to 125 apartments offering supportive housing with onsite services for unhoused and low-income residents, as well as open landscaped areas.

“More than 60% of the 2.8-acre site will be preserved as open space and revitalized into a renewed park space that reinforces the site’s history,” the university said. The site will also feature “a memorialization of the park’s past and historical significance.”

The university’s plans also include providing interim housing to individuals living in People’s Park, with services to support a transition to permanent housing, a website dedicated to the project says.

This is a developing story and details will be added as they emerge.

Sara Pascoe looks back: ‘I often tell myself I am funnier the uglier I look’ | Sara Pascoe

Stop Talking About Ukraine’s Tactics Against Russia: Volodymyr Zelensky To…

Fire at Hotel in Gujarat’s Jamnagar brought under control, all evacuated safely…