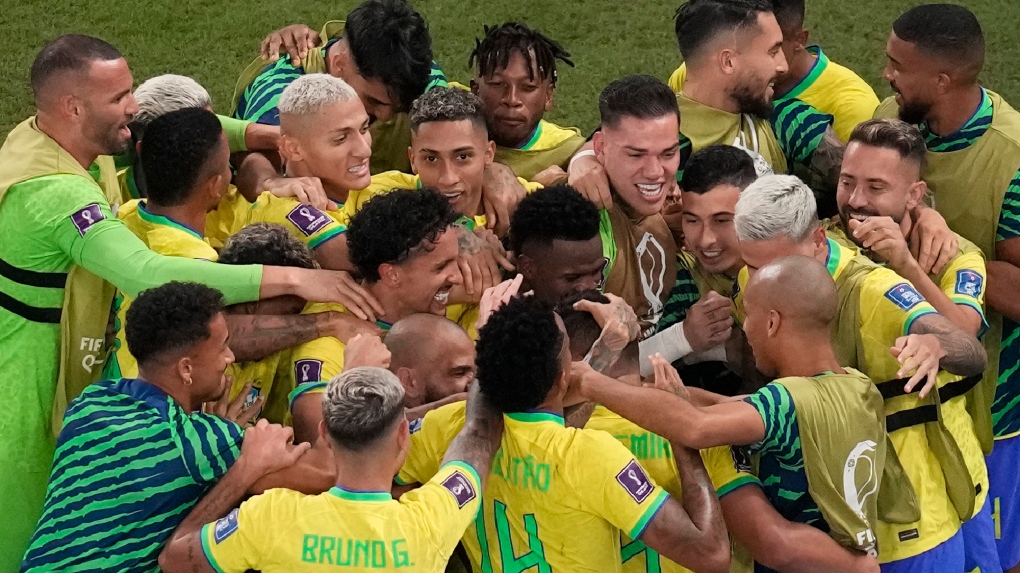 
Brazil overcame the absence of Neymar to beat Switzerland 1-0 and advance to the round of the 16 of the World Cup on Monday.


Casemiro scored in the 83rd minute with a shot from inside the area to put Brazil in the last 16 with a match to spare in Group G.


Brazil forward Neymar stayed at the team’s hotel treating a right ankle injury sustained in the opener in Qatar. Team doctors have not yet given a timetable on his return — or said if he will return at all.


The win gave Brazil six points from two matches, leaving Switzerland with three. Serbia and Cameroon, which drew 3-3 earlier Monday, have point each.


Switzerland, which had no attempts on target, needs a win in the last match against Serbia to guarantee its spot in the next stage. A draw may be enough depending on the match between Brazil and Cameroon.


The result extended Brazil’s unbeaten run in the group stage to 17 matches, with 14 wins and three draws. It has lost only one of its last 29 group games, with the last defeat coming against Norway in 1998 in France.


Switzerland had lost only two of its last 13 group matches at the World Cup.


It was an even match early on, with both teams trying to control the game but not creating many significant chances. Without its injured playmaker, Brazil struggled to get near Switzerland’s area until Casemiro scored with a nice one-timer into the far corner, using the outside of his right foot in a shot that deflected slightly off defender Manuel Akanji.


Brazil coach Tite replaced Neymar with midfielder Fred, freeing up Lucas Paqueta to play closer to the attack. Eder Milit├úo, who plays as a central defender at Real Madrid, came in for Danilo in the right back position, instead of veteran Dani Alves.


With Paqueta not being able to create much for Brazil, Tite began the second half with Rodrygo in the team. Richarlison, who scored both of Brazil’s goals in the opener, was not as effective and was substituted in the second half.


Vinicius Junior thought he had given Brazil the lead with a shot from inside the area after a pass by Casemiro in the 64th, but video review determined there was offside in the buildup. Few had noticed it until the VAR call was announced at Stadium 974.


Both teams won their opening matches, with Brazil defeating Serbia 2-0 and Switzerland beating Cameroon 1-0. Brazil and Switzerland also met in the group stage in 2018, drawing 1-1.


Xherdan Shaqiri made a national record 11th World Cup appearance. He had been level with Valon Behrami and Stephan Lichtsteiner. Shaqiri, who had a hat trick against Honduras at the 2014 tournament in Brazil, also matched Behrami’s record of appearing at four World Cups.


Shaqiri and Granit Xhaka were both trying to become the first Swiss player to score in three World Cups.


The lights dimmed for a few seconds before halftime at Stadium 974, prompting a brief stoppage in play. Brazil was about to take a corner when it suddenly started turning dark at the temporary stadium.