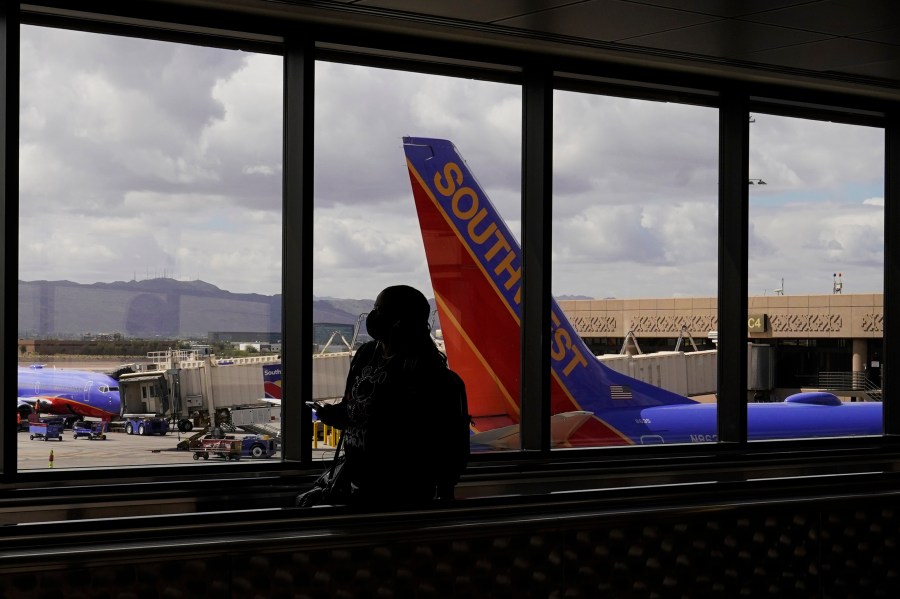 (AP) — AT&T and Verizon have agreed to delay the launch of a new slice of 5G service by two weeks after airlines and the nation’s aviation regulator complained about potential interference with systems on board planes.

President Joe Biden said the agreement reached Monday will help avoid further disrupting airlines, which have blamed bad weather and the surging coronavirus for delaying or canceling thousands of flights over the past several days.

The telecom giants agreed to delay Wednesday’s planned launch of the new C-Band strand of 5G, which promises faster speeds for customers, in order to implement changes around airports. They still dismiss concerns that it could negatively affect aviation equipment.

The companies already postponed the C-Band rollout by a month when, over the weekend, they rejected a request by Transportation Secretary Pete Buttigieg and the head of the Federal Aviation Administration to delay the launch again.

Under Monday’s agreement, the companies also agreed to reduce the power of their new networks near major airports for six months. That will give the FAA more time to study potential interference with aviation.

Here’s a look at what happened and what comes next for wireless customers and air travelers.

HOW IMPORTANT IS THE NEW SERVICE FOR TELECOMMUNICATIONS COMPANIES?

So far, 5G service from AT&T and Verizon has not been very different from existing 4G service for most customers. The new segment of radio frequencies called C-Band, a “mid-brand” spectrum, could mean faster signals over wide areas for many customers. T-Mobile already has huge swaths of mid-band spectrum.

Over the past few years, wireless carriers have spent tens of billions of dollars to license spectrum from the government and roll out 5G service. However, their plan to use C-Band ran into fierce opposition from airlines and aviation groups.

WHAT DID THE AIRLINE INDUSTRY SAY ABOUT THE NEW 5G SERVICE?

U.S. airlines say wireless use of the C-Band segment of the spectrum could interfere with altimeters, radio devices that measures a plane’s height above the ground. The trade group Airlines for America said airlines could be forced to cancel or divert thousands of flights as a safety measure.

WHOSE SIDE IS THE GOVERNMENT ON?

The Federal Communications Commission, which runs the auctions of radio spectrum, determined that C-Band could be used safely in the vicinity of air traffic. The FCC in 2020 set a buffer between the 5G band and the spectrum that planes use to resolve any safety concerns.

But Buttigieg and FAA Administrator Stephen Dickson, whose agency is responsible for aviation safety, saw a potential problem. On Friday, they asked AT&T and Verizon to hold off activating C-Band 5G near an undetermined number of “priority airports” while the FAA conducted further study.

HOW DID AT&T AND VERIZON RESPOND?

They dismissed the concerns. The wireless industry trade group CTIA notes that about 40 countries have deployed the C-Band strand of 5G without reports of harmful interference with aviation equipment.

But AT&T CEO John Stankey and Verizon CEO Hans Vestberg did offer to reduce the power of their 5G networks near airports, as France has done.

“The laws of physics are the same in the United States and France,” Stankey and Vestberg said in a letter Sunday to Buttigieg and Dickson. “If U.S. airlines are permitted to operate flights every day in France, then the same operating conditions should allow them to do so in the United States.”

Although they took steps to soothe the federal officials, the telecoms are still bickering with airlines, which have canceled more than 10,000 U.S. flights since Christmas Eve because of bad weather and labor shortages caused by COVID-19.

“While the airline industry faces many challenges, 5G is not one of them,” Vestberg said in a company memo Tuesday.

HOW MANY PLANES DOES THIS AFFECT?

Under the agreement, the FAA will conduct a survey to find out. The FAA will allow planes with accurate, reliable altimeters to operate around high-power 5G. But planes with older altimeters will not be allowed to make landings under low-visibility conditions.

WHAT WILL HAPPEN IN THE NEXT TWO WEEKS?

The two-week postponement will give the FAA and the companies time to implement the agreement.

AT&T and Verizon will be allowed to launch C-Band service this month under already-granted FCC licenses. The airlines have until Friday to give the companies a list of up to 50 airports where they believe the power of C-Band service should be reduced through July 5.

Not sure how to find us? Here’s how to watch NewsNation on TV and online.

Until July, the telecoms will talk to the FAA and airlines about potential long-term measures regarding 5G service near airports. However, under terms of the agreement with the FAA, AT&T and Verizon will have sole power to decide if any changes in service will be made.

“We felt that it was the right thing to do for the flying public, which includes our customers and all of us, to give the FAA a little time to work out its issues with the aviation community and therefore avoid further inconveniencing passengers with additional flight delays,” Vestberg said in his memo.

Nicholas Calio, president of the airline trade group, was more muted in his comments about the agreement, although he thanked federal officials for reaching the deal with AT&T and Verizon.

“Safety is and always will be the top priority of U.S. airlines. We will continue to work with all stakeholders to help ensure that new 5G service can coexist with aviation safely,” Calio said.

The FAA issued a brief statement about the two-week delay, saying it looks forward “to using the additional time and space to reduce flight disruptions associated with this 5G deployment.”