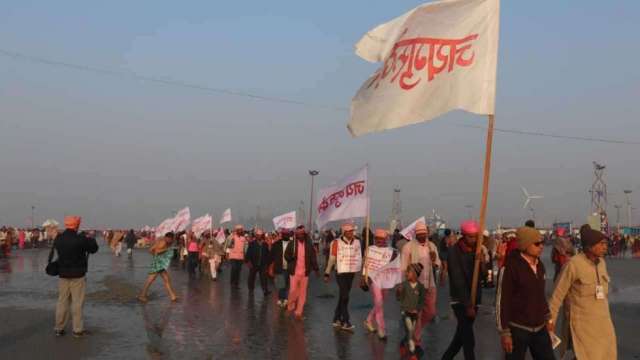 Wary of the increasing number of COVID-19 cases arising in the state, Odisha government on Tuesday (January 11) imposed a ban on any kind of religious gathering on January 14 for Makar Sankranti and Pongal festival celebrations.

The office of the special relief commissioner (SRC) issued a special guideline prohibiting congregations at river banks, ghats, ponds, sea shores or near other water bodies for bathing on the occasion of Makar Sankranti and Pongal and on the following day.

Since large crowd gather at the temples on the occasion, the order said that all religious places and places of worship will remain closed to the people on Makar Sankranti, Pongal, Makal Mela days.

However, religious rituals will be allowed with bare minimum number of priests, servitors and staff, it said.

People are advised to perform the rituals and puja on the occasion at their homes with only their family members. They should avoid mass gatherings and adhere to the COVID-19 safety protocols, it said.

The government also directed all district magistrates, municipal commissioners, commissioner of police of Bhubaneswar-Cuttack and superintendents of police to strictly enforce the guidelines.

Odisha recorded 7,071 new COVID-19 cases on Tuesday, a sharp rise of 46% over the previous day’s figure of 4829 cases and the biggest one-day spike in over seven months, the health department said.

The tally climbed to 10.83 lakh with the latest infections and the daily positivity rate jumped to 10.25% from 6.5 a day ago.

Seven hundred and seven children are among those infected in the past 24 hours, the bulletin said.

Khurda district, where Bhubaneswar is located, reported nearly one-third of the cases with 2,226 people affected by the virus. Sundargarh logged 1,147 infections, followed by 609 in Sambalpur and 505 in Cuttack, it said.

The number of active cases climbed to 27,216 — including 8,609 in Khurda, which is in the red zone along with Sundargarh and Sambalpur. Cuttack is in the yellow zone with 2,000 coronavirus patients, the bulletin said.

The toll rose to 8,469 with another fatality in Bolangir district. The deaths were confirmed as deaths due to Covid after an audit. 53 other coronavirus patients have died due to comorbidities, it said.

Odisha health services director Bijay Mohapatra said more than 19,000 active cases were in home isolation and the hospital admission rate in the state was less.

There is no room for complacency as hospitalisation may increase with the rising number of cases, Mohapatra told reporters.

Denial of responsibility! Yours Headline is an automatic aggregator of the all world’s media. In each content, the hyperlink to the primary source is specified. All trademarks belong to their rightful owners, all materials to their authors. If you are the owner of the content and do not want us to publish your materials, please contact us by email – [email protected]. The content will be deleted within 24 hours.
COVID-19Makar SankrantiOdishaPongal
0
Share