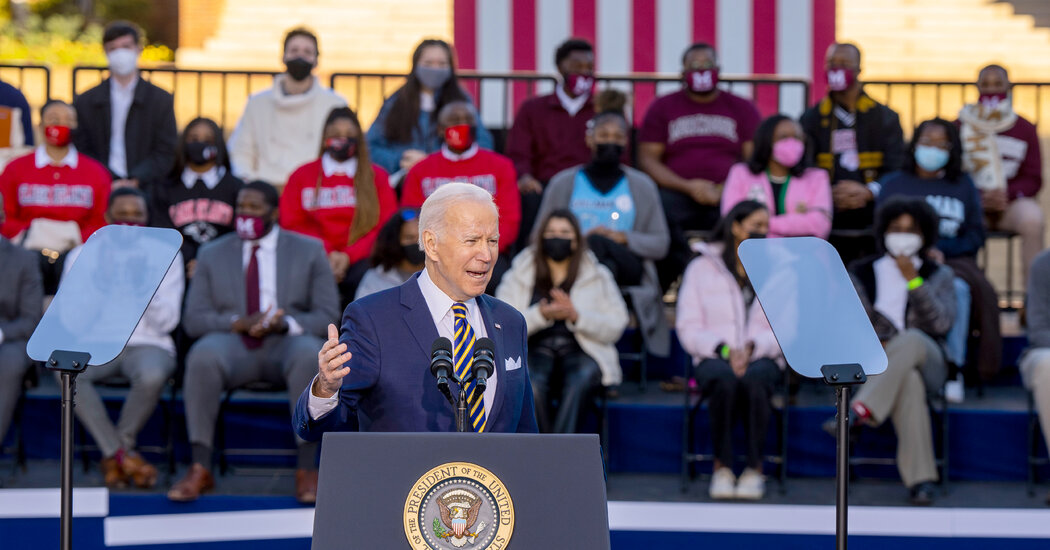 President Biden and congressional Democrats are making a new push to pass a voting-rights bill.

As they do, it’s worth keeping in mind that there are two major categories of voting issues that sometimes get conflated. There is also a growing debate about which should be the higher priority.

The first category includes the issues that have long animated voting-rights advocates, like expanded voting access — through mail ballots, for example — as well as restrictions on partisan gerrymandering and campaign donations. Advocates say these policies are particularly important because of Republican efforts to restrict voting, especially among Black, Latino and younger Americans, and draw gerrymandered districts.

The second category was obscure until the 2020 presidential election. It involves new laws to prevent the subversion of an election after it happens, as Donald Trump and his supporters tried do in 2020 and have signaled they may try again.

Some experts believe that both categories are vital and that viewing them separately is a mistake. Others say that while the first is important, it’s also part of a centuries-long, back-and-forth struggle to expand voting access — while the second is urgent, given the looming threat of an overturned election.

Today, we walk you through the case being made by each side in the debate — as well as the latest news, including Biden’s speech yesterday, delivered at a group of historically Black colleges in Atlanta.

The major recent voting legislation from congressional Democrats has focused more on the first category.

The House last year passed a sweeping bill that would, among other things, mandate automatic voter registration, ban partisan gerrymandering and expand early voting. A compromise bill, favored by Senator Joe Manchin, would include narrower versions of many such ideas, as well as a voter-identification requirement, which is a Republican priority.

Some voting-rights advocates favor an ambitious approach that combines these ideas with attempts to crack down on Trump-like subversion of vote counting. “It’s all one related attack,” Wendy Weiser of the Brennan Center for Justice told us. “It’s not enough to just stop the attempt to sabotage at the very end of the process if the process is being undermined at every other phase.”

One rationale: It remains unclear whether Republicans will agree to any voting-rights bill. If Democrats have to pass a bill along partisan lines, according to this view, they should pass the best, broadest bill, one that does everything possible to protect basic rights.

American democracy is facing “an existential crisis,” The Washington Post’s Perry Bacon Jr. has written, “and it should be treated like one.”

Other voting-rights activists consider this view naïve. They say that an ambitious, partisan legislative push is doomed, given Democrats’ narrow Senate majority — and that the Trumpist threat to democracy is a true emergency.

Our colleague Nate Cohn, who covers elections, calls the possibility of election subversion “the most insidious and serious threat to democracy.” Rick Hasen, an election-law expert at the University of California, Irvine, told us, “This is a house-on-fire moment, and the priority should be trying to find bipartisan paths toward compromise.” (In a recent Times Opinion article, Hasen wrote that Democrats have not focused enough on the threat.)

Hasen and others have suggested rewriting the Electoral Count Act of 1887, which is now fairly vague. A strengthened version of it might raise the bar for when a state legislature could declare an election to be void. It could limit the occasions to a terrorist attack or natural disaster, rather than allowing a legislature to do so by citing (often false) claims of fraud.

Manchin’s compromise bill includes a couple of other ideas that voting-rights experts favor: a requirement that voting machines produce a paper ballot for every vote; and limits on when election officials can be removed from office.

Advocates of a narrower approach note that some Republicans appear willing to consider it. Mitch McConnell, the Republican Senate leader, has suggested that he might be open to reforming the Electoral Count Act. Susan Collins of Maine has convened a bipartisan group to discuss electoral reform, including changes to the 1887 law. “Another issue that we’re taking a look at is how we could protect election officials from harassment,” Collins told Punchbowl News.

For now, Democrats appear more focused on the more ambitious option. If they had even slightly larger congressional majorities, that approach might be promising. But they do not. They cannot afford to lose even a single Democratic senator.

In his speech yesterday, Biden called on the Senate to pass voting-rights legislation, even if it requires changing the filibuster. If that happened, Democrats could pass a bill without any Republican support.

In doing so, Biden heeded the calls of Democratic activists who have been urging him to put more pressure on Congress. In reality, though, he does not have much leverage. He cannot force Manchin and several other senators who generally support the filibuster to change their minds.

It seems to be an example of what Brendan Nyhan, a political scientist at Dartmouth College, calls “the Green Lantern Theory of the Presidency” after the superhero of the same name. Nyhan coined the phrase to describe the mistaken belief that presidents can force Congress to act by trying really, really hard.

Still, there is a scenario — albeit an unlikely one — in which the new attention on the issue might lead to a new law. Perhaps a bipartisan group of senators will come up with a narrow bill that can win 60 votes and overcome a filibuster. Or perhaps the Democratic holdouts will decide that the issue is important enough to sidestep the filibuster and pass a different bill from the ones proposed so far.

“Wherever the effort might end,” Nate Cohn has written, “a more realistic legislative push begins with an earnest effort to write a bill that is more responsive to the current threats to the system and is designed to win enough votes to pass.”

Schneider hasn’t been the only contestant on a roll — long winning streaks have grown more common on the program. In 2003, “Jeopardy!” abandoned a rule that limited contestants to no more than five wins in a row. Since then, a dozen players have won 10 or more games — three of them in this season alone. Matt Amodio recently achieved the second-longest run in the show’s history, winning 38 consecutive games.

The excitement of the winning streaks provides ratings boosts. But as Julia Jacobs writes in The Times, many are wondering what’s causing the trend. Has the game gotten easier? “I actually think the show may be getting harder,” Michael Davies, the show’s executive producer, said. “We have massively diversified the history, cultural and pop cultural material we expect our players to compete over.”

The former champion James Holzhauer thinks the trend may just be a coincidence. “People always assume everything is a paradigm shift,” he said, “when it’s actually fairly normal for results to occasionally cluster.”

The pangram from yesterday’s Spelling Bee was diffract. Here is today’s puzzle — or you can play online.

If you’re in the mood to play more, find all our games here.

Thanks for spending part of your morning with The Times. See you tomorrow. — David

Aaftab chopped Shraddha’s body with a Chinese cleaver, hid it near office;…

University of Idaho students share how they are staying safe after murders: I carry a…