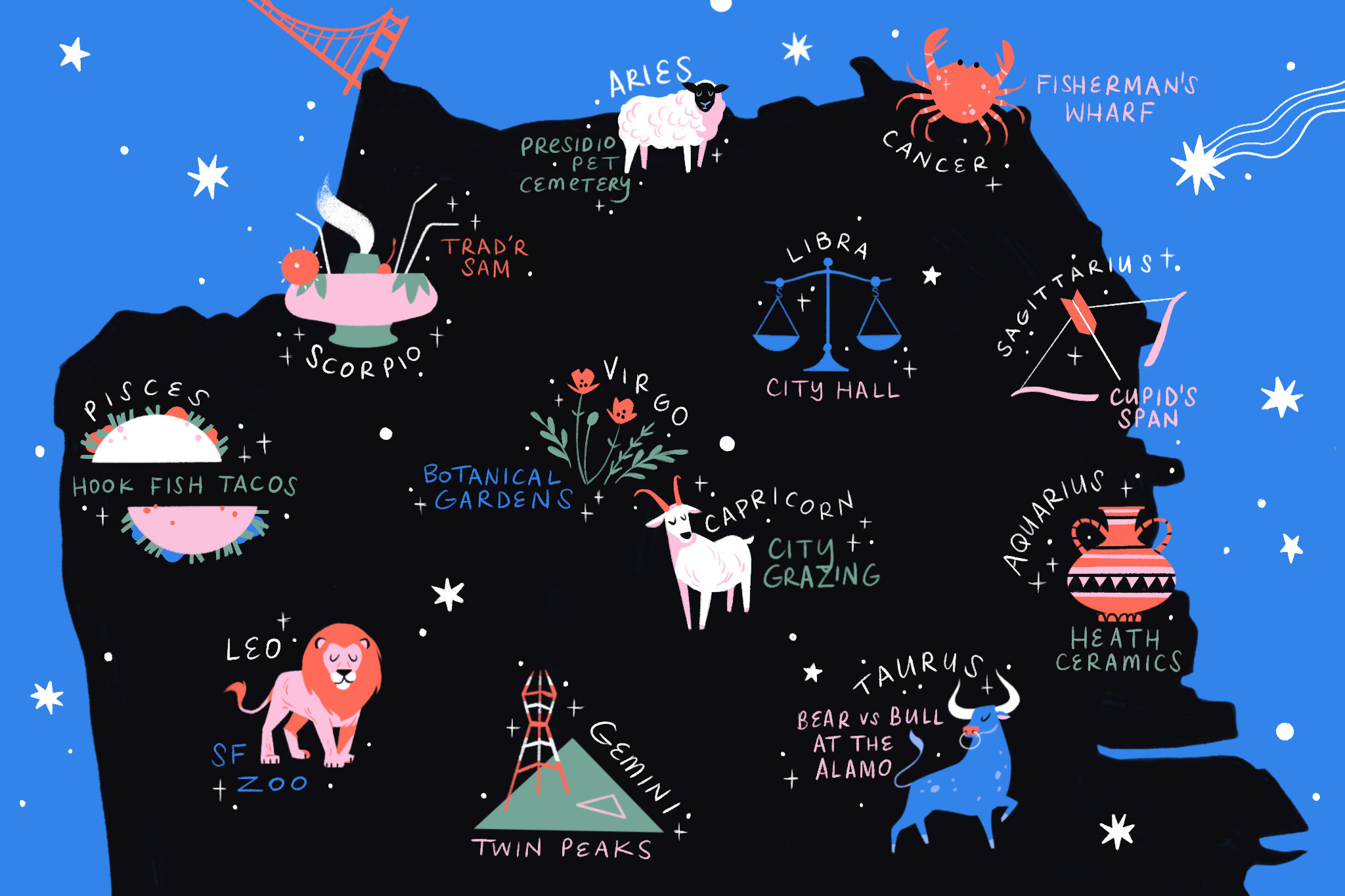 If you’re feeling like 2022 is just 2020, too, you’re only kind of correct. Some signature astrology that defined that fateful year does make a reappearance, but according to many astrology experts, 2022 also has its fair share of hopeful and helpful transits that sets it far apart from the last two years.

Andi Renee, The Raven’s Wing Magical Co. store manager and resident astrologer who hosts monthly salons on astro wellness, says there’s much to look forward to, particularly this spring. “After a lonely winter, it’s looking like a resplendent, heart-opening spring,” he says, thanks, in part, to Jupiter finally moving into one of its home signs.

That hopeful, mind-expanding transit may help us deal with some of the more difficult astrology of the year, such as when fiery Mars goes retrograde this fall or when San Francisco experiences its first ever Pluto return. From a once-in-many-generations event that has historians and astrologers drawing parallel connections to four Taurus-Scorpio eclipses, read on for the defining astrology the bay should watch out for this year.

For the past two years, Jupiter has been grinding in business meetings and social justice rallies in Saturn-ruled Capricorn and Aquarius. So things have been a little tense … While Saturnian themes of restriction and power are still at play in 2022, the magnanimous “fairy godmother” of the skies gets to don a tropical shirt and take a little break in Pisces, where Renee and other astrologers say it’ll bless us with hope, expanded consciousness, easeful connection, art and spirituality.

For the general vibe, this transit is the perfect day at Hardly Strictly Bluegrass or a free VIP ticket to Outside Lands. On a personal level, think back to Gemini season 2021 when Jupiter briefly created a festival of luck in Pisces. What felt hopeful and expansive for you then may be getting a double act in 2022 as Jupiter moves back into Pisces at the end of the year, too.

On April 12, Neptune, the solar system’s mushroom guy, meets up with Jupiter in Pisces for a reunion the world hasn’t seen since 1856. Around then, many astrologers note, the spiritualist movement was gaining steam. So this time around as the good-time giants “catch up” over music and mind-altering substances, Renee suggests Earthlings may feel an increased interest in transcendent, heart-opening and mind-expanding experiences.

“It’d be a great time to start a cult,” Renee jokes-slash-warns. While it’s a good time for making art and exploring the ancient spiritual wisdom of your ancestral lineage, he also says this transit is ripe for deception and delusion. Watch out for spirituality gatekeepers, “gurus” advertising on Instagram and anyone who claims to have THE one and only magic pill. There’s nothing worse than a bad trip spoiling a beautiful festival.

The United States’ (and San Francisco’s) Pluto return in Capricorn

For the first time ever, Pluto, the planet of transformation and named after the god of the underworld, returns to the place it was in the sky when the United States was founded on July 4, 1776. And since San Francisco is a mere month younger, the city by the bay also experiences its first Pluto return this year. Because it takes so long for Pluto to traverse the zodiac, astrologers chart Pluto’s return for societies and countries — and of course the historical synchronicities abound.

For example, astrology writer Stephanie Warner notes that many historians calculate the median age of an empire to be around 250 years, which is almost exactly the length of time it takes for Pluto to make a full revolution. Pluto’s return doesn’t always bring the fall of empires, but it often coincides with major era-defining turning points. For instance, astrologer Ray Grasse points out that Great Britain’s second Pluto return coincided with the reign of Queen Elizabeth I, the Golden Age and the initiation of the slave trade.

Renee says that because Pluto moves so slowly, we’ve already been experiencing the effects of its return. “We’ve especially been seeing it the last couple of years around issues of power, who has access to it, and who’s excluded,” he says.

Capricorn has to do with government, money and social institutions. Renee notes that Pluto entered Capricorn in 2008, a year that saw a major economic recession and the United States’ first Black president. “That was a big moment,” he says. “A different kind of person was in power—and then came the backlash with Trump. The Pluto return is about that: trying to hold onto power and exposing those who are invested in upholding the status quo.” Since Capricorn is about building things that last, Renee suggests meeting this once-in-a-lifetime moment by examining how San Francisco—and the U.S. more broadly—was founded. “What’s hidden in the foundation that we didn’t know was built in there? What are the cracks in the foundation? What needs to be torn down and started over again?”

Mars and Saturn conjunction in Aquarius

You might be dusting off this meme come early April as Mars and Saturn meet up in Aquarius. The last time this fateful conjunction occurred was March 2020, coinciding with lockdowns and social distancing in the name of community care (highly Aquarian themes). Astrologer Chani Nicholas foretells “limitations, boundaries and restrictions we’ll need to abide by” in her forecast for 2022. But also says that we may be “closing the loop” on this particular astrological signature for a while. Here’s hoping.

If Jupiter in Pisces is like a weekend at Esalen, Jupiter in Aries is the “brainstorm meeting” the following Monday morning. Bold, inspired, entrepreneurial and more than a tad hasty, Renee says this transit is a good time for starting something new. After all, you may feel eager for inspired action after soaking in Pisces’ primordial tubs while having heady conversations with naked strangers. But beware false starts and backfires.

“Jupiter in Aries is a little ‘shoot first and think later,’” Renee says.

Still, what Jupiter in Aries lacks in follow-through, it makes up for in sheer enthusiasm and optimism — something we all need around halfway through year three of a pandemic.

While summer’s Aries-heavy astrology is set up to keep your inner fire ignited, Renee warns of potential explosions the first week of August. That’s when Mars (whom you might remember from last summer’s fling with Venus) shows up to Aries’ bonfire with fireworks and squares off with Saturn, the solar system’s police force.

“It makes me worried about war or spontaneous acts of violence,” Renee says. I gulp. But in the same breath he continues, “But, you know, it’s also a great time to start a workout routine. … It’s a lot of energy. So how can you find a healthy outlet for it?”

After summer’s sparring, Mars moves into Gemini where Renee says it’s prone to be a little scattered and distracted. Add to the mix a retrograde and it’s a recipe for a pileup on the Bay Bridge during rush hour caused by texting while driving. “Mars is all about our drive and will to do things, so when it’s retrograde it’s like slamming on the brakes,” Renee says. “We could feel frustrated and depleted, like our actions aren’t working.”

Astrologers agree this is one of the most challenging aspects of 2022. So how to deal? To avoid spiraling into road rage, Renee advises using the Gemini energy to free write through anger and — here’s the key — not share it. “Write it down and burn it instead,” he suggests.

November 2021 kicked off a new series of eclipses along the Taurus-Scorpio axis and by the time we reach the total lunar eclipse a year later, we’ll have experienced four of these cosmic blackouts. On a global level, eclipses along the Taurus-Scorpio axis may pull focus on how we’re in relationship with the Earth and other structures that are essential to our survival.

Astrologers often describe eclipses as an unfolding story. November’s eclipse marks the approximate halfway point, where things are always particularly messy, confusing, and the odds are stacked against us.

To further complicate the narrative, Renee notes the midterm elections coincide with this cosmic event. “Yikes. It’s going to be tense,” he warns. But … you already knew that.

Before you despair, Scorpio season is always about finding transformation in the darkness, and this time around we’re aided by Jupiter doing the backfloat through Pisces, which teaches us again that generosity and love conquer all.

Peter Dinklage is right: a live-action Snow White and the Seven Dwarfs is a…

​Bing Crosby remembered how he got his nickname – ‘It’s the…